The “Despacito” effect continues. That is to say, I continue to receive media inquiries about reggaeton a good year after the song’s triumphant run. And while I’ve started to get a little tired of the same questions, this newfound enthusiasm over and curiosity about reggaeton has also resulted in some cool invitations and some strong media. Allow me to round up a little of it here.

First, I want to say that I had an absolute blast talking with Uproot Andy, Riobamba, Isabelia Herrera, and, of course, reggaeton pioneer DJ Nelson at the Redbull Music Festival back in May. We did a live version of Andy’s and Sara’s internet radio show, “Bien Buena,” where the three of us essentially took turns asking Nelson to recount some of the highlights of his career and the genre’s history. Alas, I don’t think the audio is available, though I’m hoping it might one day appear. Really, though, I would die for a video of the event, especially the moment where Nelson reached over and played classic reggaeton drum sounds that I had loaded on my laptop, noting which particular drums he himself had sampled! (I was in reggaeton scholar heaven at that moment, as anyone who was there will attest.) At least I’ve got this sweet photo to show for it — 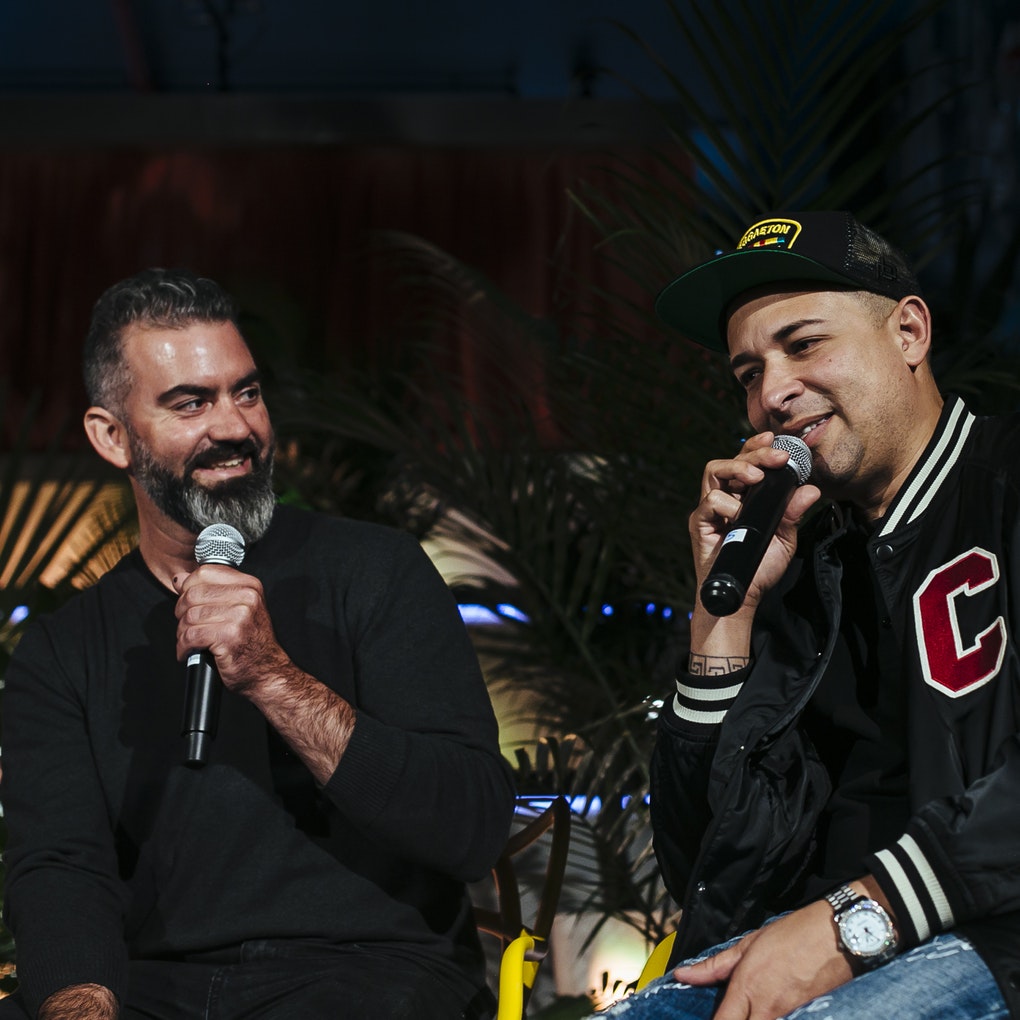 That said, I do have some excellent video to share courtesy of Al-Jazeera Plus, who recently produced two short pieces about reggaeton, race, gender, and a host of other issues. In addition to yours truly looking academic in a Berklee classroom, there are some really wonderful performers and scholars who contribute to the videos (and AJ+ was fortunate to find out about the Redbull festival in time to catch up with the likes of DJ Negro and Ivy Queen). Here’s the first one —

The second video, focused on the role of women in reggaeton, does not appear to be on YouTube, but you can watch it on Twitter or FB.

While I’m here collecting reggaetony media, I’ve got to put in another shoutout to Eddie Cepeda for his work in this vein. His piece for Redbull on the history of the Noise is required reading, and I was glad to see some my ol’ words appear in his piece on Luny Tunes. I also spoke with Eddie for a piece he wrote about perreo and its wider Afrodiasporic genealogy — a topic I’ve written about before and which I’ve thought about in greater historical depth through the “American Social Dance” class I’ve been teaching at Berklee.

Recently, Eddie tweeted that “We need more reggaeton scholars.” I absolutely agree, though I can’t help but feel that Eddie is a little sick of citing me LOL. Anyway, the game is wide open, and work is being done. I hope all this activity can help to stimulate a next generation of people writing about this music, and I remain humbled by the contributions I’ve made as an engaged outsider.

Ok, one more thing, as reggaeton does figure in it (yet again). Below I will embed a video of my keynote, “From Breakbeats to Fruity Loops. Small Sounds and Scenes in the Age of the DAW,” delivered last December at the “Future Sound of Pop Music” symposium at Bern University of the Arts. As the title suggests, I’m interested in a variety of scenes in which creative re-use of communal, cherished sounds becomes absolutely central. In the keynote I discuss reggaeton in those terms (and demonstrate some dembow), alongside hip-hop, bubbling, and ballroom. Here’s the abstract for a little more detail:

In contrast to the aesthetics fostered by turntable practice in the 1970s and by the first generation of digital samplers in the 80s – both oriented toward vinyl-based repertories and familiar grooves – a more atomized approach to sample-based music has emerged over the last decade in the wake of widespread access to music software and broadband access to a global musical archive. The advent of the digital audio workstation (DAW), especially the virtual step-sequencer known as FL Studio (or Fruity Loops), has served to extend and intensify the sample-based practices of previous generations. This is especially audible in the establishment of new canons of cherished, iconic samples among certain circles of producers and of listening, dancing publics. A genre or musical public may now be based as much around a small set of samples – and their distinctive timbres – as, say, conventions of rhythm, tempo, harmony, or form. Notably, such samples can be surprisingly small as they speak volumes.

The resonant snares of reggaeton, the tamborzao toolkit of Brazilian funk, the “Ha” stab of the ballroom/vogue scene, the “Ice Rink” clink percolating through UK club music and beyond – and let’s not forget the myriad emulations of practically every drum machine Roland produced in the 1980s – all of these serve as potent cultural dogwhistles, addressing musical publics and shared among private and public networks of producers. Today, musical publics gathered around all manner of popular (and obscure) electronic dance music are more likely to be hailed by a set of brief sonic signifiers than by looping breakbeats or well-worn melodies; the new instrument of choice, the DAW, looms as large over this ascendant approach as the turntable or the guitar did in their own heydays.

This atomized, “timbral” turn in musical production would thus seem to reiterate the familiar story of how profoundly an instrument can shape the sound of music through its particular affordances and constraints – even an instrument so seemingly “neutral” as an “empty” DAW. At the same time, we also bear witness to the ways musicians (and the listening/dancing publics implicated by their productions) inevitably use instruments according to particular cultural logics, political economies, and social contexts. This lecture will explore and examine some of these scenes and sounds, probing the implications for creativity and authorship, ownership and participation, repertory and community.