As I mention below, I’ve been a Balún fan for over a decade, so I was utterly thrilled when the band wrote to me earlier this year and asked if I would write the liner notes for their stunning new album, Prisma Tropical. It was a dream(pop) assignment, especially since it’s their best work to date and, though I may be biased, it is my favorite recording of 2018, hands down. 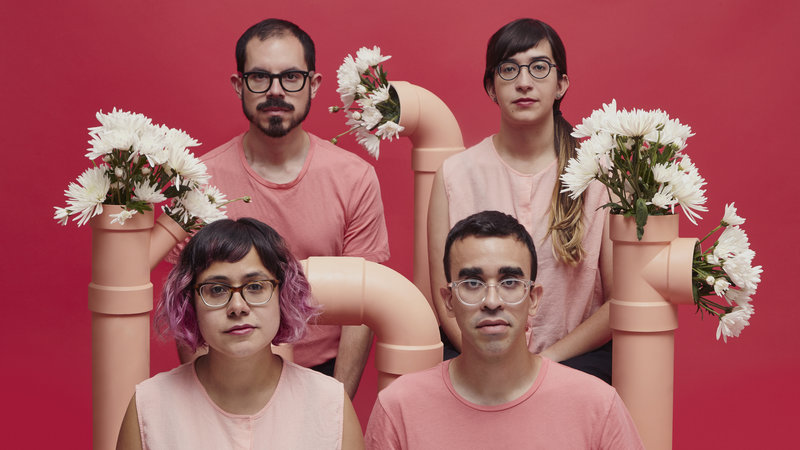 A gorgeous, meticulous combination of dreampop, Puerto Rican styles old and new, and a world of music more, Prisma Tropical finds Balún exploring the space between Puerto Rico and Brooklyn that they traverse physically, imaginatively, and emotionally. I won’t say much more, since I say enough below, but I am delighted that so many outlets — from NPR, to Remezcla, to Bandcamp — have already recognized what a great, interesting, and important record this is. (And I confess to some satisfaction in seeing my liners helping to shape the music’s reception.) This project obviously pushes a LOT of my buttons, and I hope it will for you too.

If you’re a physical media person, you’ll be glad to know that vinyl and other versions are coming, and I’m psyched that my liners will appear there as well. In classic style too: the band was inspired by the format Ansonia Records used for their back covers, which always included an album description in English and Spanish (e.g., the Arsenio album above). Toward that end, my liner notes have been felicitously translated by Mariné Pérez, and they also have been published online en español at 80grados. [Update: you can now find both the English and Spanish versions on Balún’s own website too.]

When I first heard Balún over a decade ago, I was enthralled by reggaeton and wondered about other electronic music from Puerto Rico. What a thrill to discover a group of musicians making sparkling, shape-shifting synth-pop with nary a nod to dembow — as if I had found reggaeton’s chill cousin, humming techno lullabies and painting in the cool palettes of Berlin, London, or Reykjavík. San Juan? Not as obviously. But sights shift as sites shift.

Prisma Tropical reveals the band residing in Borinquen, Brooklyn, and in between — and making the most of it. Music of old cities and new ones. Sites and sounds of love and longing, home and away — electronic and acoustic, vintage and vanguard, roots and routes. Deeply local but never provincial. Heavy as luggage yet lighter than air.

Imagine all the Caribbean on one island. The saturation of the tropical prism. New York as tropical base. Resounding alongside dancehall, bachata, konpa, salsa, soca, and hip-hop, reggaeton sounds different in diasporic Greenpoint than in hometown Carolina. No longer the dominant soundscape presence, that old dembow might be recalled fondly, even missed. Lejos, más cerca.

While dreampop often evokes nonplaces, here Balún ground their otherworldly sound in Puerto Rican folk music, from the dembow to the cuatro. The band does not dabble in such traditions as guaracha, salsa, or reggaeton, however, nor do they nod in those directions without love and respect. They approach such sounds and instruments as deeply resonant resources, a musical palette charged with the power of accumulated listening, singing, and dancing. A repertory ripe for reinterpretation. Home as port of departure. Dreambow.

The opening track, “Vaivén,” sets the tone. Coquís chirping in the background. A slow melody plucked out on the cuatro. An idea from home. (To be processed elsewhere.) As the tones ring out into an enveloping wash, we’re transported. Going and coming, coming and going. A submerged dancehall beat builds steam, heralding the majestic, mysterious vistas of “La Nueva Ciudad.” Strange but familiar shapes come into focus as wispy vocals, dembow fragments, and fluttering bass tones conjure a new city, another planet, a hidden place. When the dembow loop finally fully drops for the chorus, cherished snare samples shifting every four measures like a maratón mixtape, we know we’ve arrived somewhere special. Far from a facile or ironic nod to reggaeton, the classic timbres and patterns support a new song of a different sort—a song of buoyant vocals and intimate thoughts, whispered aloud, of uplifting harmonies billowed by outboard synths, of swirling guitar ornaments channeling Reich and Fripp, of bomba barrel drums and jíbaro guitarrillos.

The album’s expansive, evocative sound is a consequence of each member playing and writing for a rotating cast of instruments and effects, from programmed synths and robotic percussion to accordions and guitar pedals, string quartets and traditional Puerto Rican lutes. Either the cuatro or its older, soprano cousin, the tiple — one built by Noraliz no less! — appear on nearly every track. (The tiple’s distinctive ring might be processed with delay inspired by the Cocteau Twins, of course, and while that may not be típico, for Balún it’s typical.) Between Nora fingerpicking across acoustic heritage, José on the beats and synths (ever in conversation with electronic subgenres old and new), Angélica’s clarion voice and soaring string arrangements, and Raúl providing mesmerizing, percussive guitar lines, Balún bring a wealth of resources and references into the mix.

This time around the lead instruments on each song are acoustic and meant to be played live. Producer Lawson White encouraged Balún to bring acoustic instruments to the fore and explore what they had to say. The approach speaks volumes, infusing the band’s music with new (and old) idioms. White, who has added countless ideas and production touches, horn arrangements and marimba lines, deserves praise for pushing the band to realize such an ambitious vision. The album is brilliantly conceived, recorded, mixed, and sequenced. It shines as it should.

While Angélica, Nora, José, Raúl, and Lawson steer the ship, Prisma Tropical is an extended ensemble work, including Antibalas horns, an all-female string quartet, drummer Henry Cole accompanying programmed loops with panache, and among other contributions, numerous appearances by Obanilú Allende playing bomba drums, Enrique Bayoan on Andean panpipes and an Argentinian drum that can be heard a league away, and various friends pitching in on production and backup vocals.

It would be a fool’s errand to list all that is packed into these songs, so dense is the album with allusion, collaboration, and inspiration. A multitude of colors and contrasts appear within and across tracks, a distinctive and remarkable stylistic versatility and fluency at the service of some wonderful songs. Cruzando bordes sin pensarlo. Whimsical turns make forms that delight and surprise, while a pop sensibility smooths experimental edges (but not too much). That Balún pack so much into a single hour of music is no small achievement. Listen closely and make the connections you need to make yourself.

But don’t miss the nod to the customary son montuno opening of “El Flamboyán,” a guaracha popularized by El Cuarteto Mayarí, on “Coralina,” which opens the B-side of the album. Or the glorious jungle coda of “El Espanto”! Or the way that “Pulsos” glides from Afrobeat to prog rock before building into a disco-era Salsoul burner that I wish David Mancuso could have lived to hear. Or the shimmering outro, “Reflejo,” five reverberant minutes of rippling guitar, occasionally interrupted by blasts of effects — a moment to gaze at one’s shoes and reflect, to wonder where we’ve been, where we’re at, where we’re going.