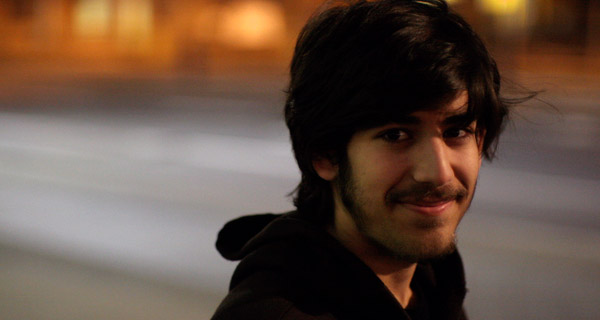 In honor of the late, great Aaron Swartz, pictured above, I’m making an overdue effort to get some of my own works out from behind walls of various sorts and into the open. (This is always my practice, but sometimes there’s more of a lag than I’d like.) I can’t say that I ever met Aaron, despite no doubt crossing paths in Cambridge over the years. But I have so many friends who counted him a friend, his loss resonates on a personal level as well as an intellectual one. Of course, I was well aware of Aaron’s work and keenly curious about the JSTOR case as it proceeded, and like many others I find myself disgusted and galvanized by the tragedy of his persecution and death.

While there is a general effort, if not concerted movement, among academics to take the opportunity to make their own articles openly accessible in tribute to Aaron, aptly enough the PDFs I want to share here are in their own ways deeply concerned with the (un)fettered and often creative circulation of texts, files, media, ideas, riffs — whatever you want to call em. In these particular two cases, mashups and remixes.

The first piece is something I wrote many years back but only published in book form more recently. “Mashup Poetics as Pedagogical Practice” grows out of a series of talks I was giving at the time, offering an aesthetic explication of mashups while also posing the form as one we might embrace for teaching and publishing alike. Obviously, it’s something of a technomusicological manifesto, building on earlier riffs about musicking about music and offering examples from my own bloggy oeuvre. Indeed, I did a little something along these lines in the mix I made to accompany the second PDF I’d like to share. But first, here’s a link & a cite:

The second PDF I want to share was co-written a couple years back with Jayson Beaster-Jones, an anthropologist who knows a heckuva lot about the Indian music industry and the role of “remix” therein. We casually started cooking up the article over coffee at UChicago — and later up on Devon Avenue — some 6 years ago, so this was really quite a welcome fruition of a longstanding project (which I first blogged about way back in July 08). For helping to bring this into the world, I’d like to thank another dear colleague, Nilanjana Bhattacharjya, an old ethno-friend and the co-editor of the special issue of South Asian Popular Culture in which our article appeared:

You may know the story of how DJ Quik sampled an obscure Bollywood song for Truth Hurts’s “Addicted” and got Dr.Dre sued for a cool $500M, but you might yet be surprised by some of its twists and turns. While the song has been written about quite a bit, especially as an example of US orientalism and illicit appropriation, for our article, Jayson and I wanted to focus on the meanings generated by each new iteration of the song, attending to content as well as context, and placing our emphasis on cosmopolitan agents making creative and, yes, charged choices about musical representation. As we write in our conclusion, we can’t bring ourselves to care nearly as much about rich guys suing rich guys than we do about all the amazing and wonderful stuff that people do in the midst of it all.

The Hindi film song ‘Thoda resham lagta hai’ [It takes a little silk] written by the music director Bappi Lahiri for the film Jyoti (1981) was a long forgotten tune before being rediscovered in 2002 by American music producer DJ Quik. Based around an unauthorized 35-second sample of the recording, the Truth Hurts song ‘Addictive’ famously inspired Bappi Lahiri to sue Quik’s associate Dr Dre (executive producer of the song), Aftermath Records, and Universal Music (Aftermath’s parent company and distributor) for $500 million. Beyond Lahiri’s claims of cultural imperialism, obscenity, and outright theft, DJ Quik’s rearrangement of the song was, in turn, adopted by music producers, including Lahiri himself, in a wide variety of international genres. This paper tracks the use and reuse of the melody in Indian, American, and Jamaican contexts, focusing on the song’s remediation for new audiences. Yet even as this well-traveled tune evokes different historical and local meanings, it evokes an eroticized Other in each context, including its original context.

And I’m pleased to note that while I only have a measly “supplemental materials” page for the mashup article, for our piece about the peregrinations of an apparently addictive melody, I’ve cooked up the obviously obligatory mega-mix!

In addition to hearing all the recordings we reference in the article, and a few more, you’ll also hear a variety of details that — for space concerns alone — must go unremarked in our essay but will not go unheard in the mix: surprise appearances by Lady Saw and Tanto Metro and Snoop Dogg (via England, the Netherlands, and Belgium, respectively); and a host of seemingly spontaneously generating remixes made by dhol-drum and sample-pack wielding desi artists across the globe (s/o to the Incredible Kid for helping source some of these!). Polytonality and recontextualization reign supreme as the riffing and remixing runs rampant. Mirrors reflecting in mirrors, it’s an all Other everything party. Legal briefs buried beneath transduced outhereness.

Among other things, I like how the mix can show how strong a stamp Quik put on the song — or/and how in Bappi’s own attempt to capitalize on its popularity, he modifies his own composition to resemble Quik’s while attempting to upgrade it with distorted but deadening drums and heavily reverbed vocals that pale in comparison to Lata’s legendary warble. I also like how it registers — with its variable levels of compression and inconsistent metadata — the very state of circulation, the shape media take when they travel unlikely distances, the footsteps of my digital sleuthing. “Real audio” becomes a Baudrillardian phrase when ripping clips from Kannada filmi vendor sites.

While more or less chronological, and so attempting to provide an audible sense of the chains and ripples of influence, toward the end of the mix I get especially playful with genealogy. When one starts tracking a melody in this way, one gets glimmers in unexpected places. I swore that I heard the familiar tune drifting in and out of a moombahton track by Max LeDaron (remixed by DJ Melo) — and indeed, I had been mixing it with versions of “Thoda Resham Lagta Hai” and “Addictive” for months when I asked LeDaron if it was an intentional nod; according to him, it wasn’t an intentional homage, but he was struck by the resemblance and willing to cop to subliminal influence. (Can’t locate our Twitter exchange at the moment, but there’s this. [updated 1/16])

The other playful inclusion is more likely a stretch of my musical imagination, but I’ll leave it to your ears (with some suggestion on my part, as abetted by Ableton). It seems somehow more unlikely that a synth-stabbing Belgian would have seen Jyoti in 1987 than an African-American Angelino in 2001. Then again, if it’s true that the “typical elements” of the New Beat sound as heard on Nux Nemo’s “Hiroshima” include “the samples and the ethnic influences,” then, more than just hearing things, I may actually be hearing things. At any rate, to my ears, and perhaps evermore to yours, it will have to be a part of the strange and lively social life of a striking little contour and the rich complex of resonances around it.

Oh, and here’s the tracklist in all its mangled metadata glory, bearing artifacts and effects of circulation — and my own idiosyncratic paths to acquisition — that in their own ways also register in the audio:

Since it seems befitting for a story with no real beginning to also have no ending, here’s to further circulations and recontextualizations. More FreeDFs to follow soon!

Update! [2/27] — I totally forgot that I uploaded some figures we had originally planned to run with the article but then scrapped because of the ridiculous permissions-culture that we would have had to navigate. Instead I’m posting them here with no permission from anyone. Fair use, mofos!

4 thoughts on “It Takes a Little Sharing”