Went for an afternoon trip up to Devon Ave’s “Desi corridor” yesterday accompanied by an anthropologist who studies the circulation of pirated media in India (mainly Bollywood/Filmi), and who was, as you can imagine, a perfect companion for a brief tour of the strip’s numerous “record” shops (which sold CDs, DVDs, videocassettes, and even plain ol’ cassettes — but no records, far as I could see). None of these seemed to be on the level of, say, London’s Raj Deep’s as described by Blackdown, but they definitely had plenty to satisfy my current curiosity.

For DVDs, I was looking for a couple of classics — the sort of films most people have seen more than any other, namely, Mother India and Sholay, which I found quite easily. For music, I was seeking some compilations of well-received (and hence, well-replayed) filmi soundtracks, so I picked up a decent representation of tried-and-true tunes from the 50s (Awaara and Shree 420), early 80s (Apne Paraye, Pyaas, and Jyoti), late 80s (Maine Pyar Kiya), and mid-late 90s (Hum Aapke Hain Koun and Hum Saath Saath Hain). [I’ve heard more 70s stuff than anything at this point, based on the predilections of compilers and remixers, so I wasn’t really checkin for that.] I’ve already heard some real gems on the discs I picked up, but those’ll have to wait for another post —

because the one disc that blew me away and which I absolutely must discuss right now is Bally Sagoo’s 1992 album Wham Bam 2, a disc I picked up on a whim, wanting to hear what London bhangra sounded like pre-Asian Underground, pre-Panjabi Hit squad, and knowing that Bally Sagoo was the big man back then. I wasn’t surprised to hear ravey synths and housey basslines, or M.A.R.R.S.-style sampledelia, or dusty breakbeats alongside clean-as-a-whistle Soul II Soul beats, and I certainly wasn’t surprised to hear Bollywood-esque strings, bhangra vocals, and raggamuffin rap over a digital dancehall skank. That’s the London soundscape for ya. But I was surprised to hear very little of the distinctive dhol drumming or tumbi playing that have since come to define the modern bhangra sound. Even more suprising, however, was the realization that the bhangra being made in London 1992 sounds remarkably similar, in a number of ways, to the “underground”/reggae(ton) that was being made in San Juan at the same time.

Even if the production quality differs substantially between the two and the distance between Punjabi/English and Spanish is so much that even with the Jamaican rhythmic delivery they sound very different to you, the parallels should be striking nonetheless. Go listen to Playero 37 over here, if you’re not familiar with the sound. Then take, for example, the stick-n-move groove of “Lut Ke Lae Gayee (Get Mental in The House Mix)” — an epic track, constantly shifting in musical texture and style, giving the rotating vocalists different rhythms to ride — not at all unlike those ol’ maratÃ³n session mixtapes from the PR underground.
[audio:Sagoo_92_05.mp3]

Note, in particular, the point right around 1:35 when the bhangra vocalist enters along with what is quite clearly a replayed version of the well-worn bassline from the Drum Song riddim, which, just to absolutely cement the connection to classic PR melaza, is soon followed by a loop of the Bam Bam riddim, which — by my admittedly rough estimate — comes a close second to the Dem Bow as the foundational (i.e., most frequently sampled) riddim for reggaeton. (And don’t miss the call/response with a sped-up Tenor Saw about a minute later, thus bringing in the Stalag for good measure. &don’t get me started on naming all the hip-hop references, or picking out Mission Impossible melodies, etc.)

The use of the Bam Bam in this context, however, might remind some that “Murder She Wrote” (which so powerfully projected one version of the Bam Bam across every reggae soundscape in the world) was originally released on an LP called Reggae Bangara, so, yeah, this stuff just goes round and round and round, innit. 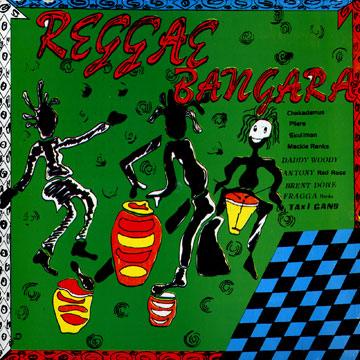 Both because this post deals with the sound of London and opens up into issues of musical mimesis, of versioning the foreign-but-familiar (and hence, second natch, the self), allow me to mention that at the end of this coming week, I’m actually going to be in London discussing this.very.subject at a Caribbean music seminar at Royal Holloway College, if focused more on reggae and hip-hop than bhangra or reggaeton.

I hope to share a little more about what I’ll be discussing before I go, but allow me to add now that in addition to participating in the seminar, and making it to London for the first time in a decade, I’m quite looking forward to linking up with some of my (now longtime) UK-based musical blogofellows. Moreover, I’m quite delighted to learn that I’ll be in town on the same weekend that two legendary local institutions — one old, one new — are gonna be in full session. Apparently, Friday night in Brixton is University of Dub, which Pete Murdertone describes as “probably one of the biggest raves in London in any scene,” and which this week will feature none other than Aba-Shanti vs. Jah Tubbys “with their full systems.” (Lordamercy.) And if that weren’t good timing enough, wouldn’t you know that Saturday happens to be the 2nd bday bash for DMZ? Nuff said.

Ok, not quite nuff: having heard the praises (and about the presence) of both, i&i cyaan wait to finally hear/feel such on their hometurf, inna London, through a proper sound and all o that. Soon fwd!