[I haven’t made another Xmas mix since this first attempt four years ago, and I’m not quite sure why. Despite my nostalgia for the sounds of the season, I think I quickly reach saturation. Anyway, I repost this for those of you who haven’t heard this before and are not yet feeling oversaturated. For those who’re seeking similarly woozy collections of nonstandard Christmas fare, do check out Gavin’s latest and Boomnoise’s 2nd volume of egg-noggin’ beats. This was originally posted on December 22, 2005.] 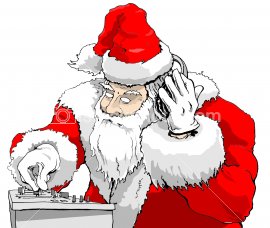 believe me, i’m sick of christmas carols, too. indeed, i was mildly horrified, but not so surprised, to hear them being played in the supermarket even before thanksgiving this year. usually, i can at least endure such schlock throughout the month of december, allowing the familiar strains to trigger my nostalgia reflex and paying more attention to wacky, 50s-era arrangements than invocations of baby messiahs.

despite their inextricable connections to crazy christians and consumerism-gone-wild, many of these songs still hold a special place in my grinchy little heart, so i’ve been wanting to put together a little remix/mix of them for a while now. of course, the inherent irreverence of messing with this stuff helps me to get over some of the piety, the schmaltz, and the kitsch. (actually, i like the kitsch – and i can even dig the piety, long as it’s nat king cole on the mic.)

thus, i offer what i hope is at least a more interesting, and fun, way to listen to these songs yet again. (and i realize i should have put this up far before people’s endurance approached the critical limits of this week. oh well.)

the songs collected here are by no means an exhaustive sampling of the christmas carol oeuvre. rather, they reflect my own (and my family’s) idiosyncratic faves, from novelty numbers to true standards of the genre. above all, there’s plenty of nat king cole, who is my absolute favorite when it comes to interpreting this repertory. alongside nat king, you’ll find such commonly compiled christmas crooners as frank sinatra, johnny mathis, burl ives, dean martin, judy garland, bing crosby, and gene autry. you’ll also find some jazzy versions courtesy of vince guaraldi (of peanuts fame), duke ellington, and the ray brown trio. and it just wouldn’t be a w&w mix without such additions as an adapted favorite by samplee-of-the-year ini kamoze (all i really want for christmas / is to be a little bit more conscious), a jingle-bell-evoking beat by latter-day de la soul, and the christmas calypso classic, “drink a rum.”

beyond the simple but significant point of tune selection, you’ll note a number of other organizational principles at work here. for one, as usual, i’m playing a lot with tempo and pitch in order to make various songs work with each other and in the context of a mix. i’m also doing a lot of looping, finding some true 2-bar gems amidst all the string-section and peculiar-percussion wankery. my muse here is hip-hop, especially such loop-finders as prince paul, dan the automator, and madlib (whose 6 variations on in the rain is definitely a touchstone for the multiple loops/edits i attempt to wring from the various songs here). another point of reference might be the avalanches, whose deft recycling and repackaging of pop detritus is a model to which we could all aspire. there are also, without a doubt, a number of nods here to loop-master rza, in particular the creation of “harmonies” (which are really quite dissonant) that result from laying various string samples over other string samples, sped and slowed voices, etc. finally, the constant use of classic breakbeats to underpin all of this is also inspired by rza and “true-school” producers more generally.

at times the songs may sound a bit woozy, for i’m really messing with their warp-points, especially in cases where the performances are more rubato than regular. i also alternate between playing what are essentially whole tracks (with little more than a breakbeat on top), playing shorter loop-based portions, and playing segments of songs simultaneously. and of course, there is a heavy bit of echo/delay running throughout the entire mix, providing a bit more propulsion, polyrhythm, and psychedelia.

if you can bring yourself to listen to this sort of stuff voluntarily, i hope you dig.

a happy holiday and season’s greetings to all – and to all a good break.