[Sticking to the seasonal, here’s another musical maneuver I pulled on some well-worn Christmas fare. Given the recent resurgence of talk about homophobia in reggae — not to mention what must be some serious shadenfreude over Buju Banton’s arrest — I have to admit that, sharing Rizzla’s frustration, I’m a little ambivalent about adding, um, flames to the fire. But a lot of my thoughts below still hold, and I still find it unsettling that I can’t hear “Little Drummer Boy” without thinking “Fire Mek We Bun Dem!” This was originally published on Dec 14, 2005.] 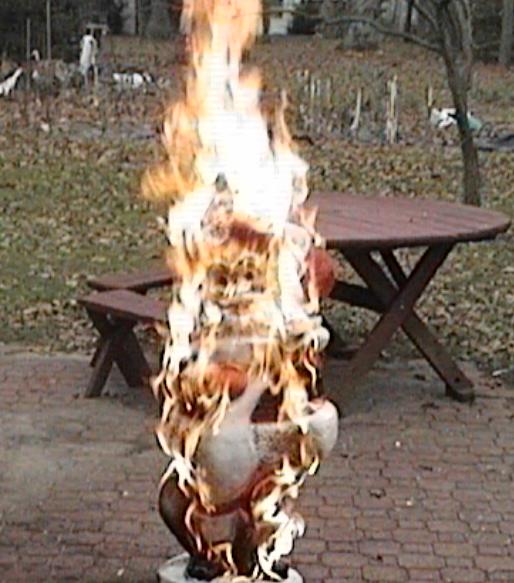 as a sort of musical reflection/intervention on the murder of steve harvey, i offer a mashup that i’ve been thinking about putting together for a while.

wayne&wax (TOK vs. Johnny Mathis), “do you bun what i bun?“
[audio:http://wayneandwax.com/riddimmeth0d/wayneandwax_do-you-bun-what-i-bun.mp3]

as with “boom bye bye” – that ever-so-catchy ode to killing gays by buju banton (who has recently been on trial for allegedly beating, with some help from his friends, six gay men back in June) – TOK’s “chi chi man” always struck me as similarly pernicious in its pleasures. by giving such sensual form to such violent thoughts, making it easy for hateful sentiments to roll around in our minds and on our tongues, these artists abuse some special powers. and though i’m not one to call for censorship, i do believe in the value of self-censorship and of community censure. at times, TOK and buju clearly suffer from too little of both.

i’ve always heard the chorus melody of “chi chi man” as an unmistakable riff on the christmas classic, “do you hear what i hear?” (one of my favorite renditions of which is the johnny mathis version used here). i’ve heard others claim, however, that TOK borrow the melody from a jamaican folk song. (can anyone confirm that? and, if so, which song?) regardless, i, and probably many other listeners, always hear it referencing the christmas carol. and although one doesn’t hear “chi chi man” too frequently ’round these parts – my brother called me one day from hartford, completely shocked that they were playing it on the radio – at this time of year, one does hear “do you hear?” and guess what it makes yours truly think of?

yup – TOK have colonized my musical imagination in this case, so i find myself dubbing “blaze di fire, mek we bun dem!” over the refrain to the song. it’s a little absurd, really. annoying, sure, but so’s the original by itself. it’s the cognitive dissonance that i find most striking: as this very (new testament) christian song overlays with the very (old testament) christian sentiment of smiting abominations, i find myself thinking about all sorts of amazing contradictions.

this mashup calls attention to the ridiculousness of TOK’s assertions. although the group boyband would likely claim to speak from a communal voice, when we hear the lyrics put in the mouths of shepherd boys, mighty kings, and people everywhere – never mind night winds and little lambs – the utter smallness of espousing such hatred is more than evident. its very christianity, of course, also comes into question. (but whose doesn’t these days?)

at any rate, i present it here in the hope that it might provoke more thought about the issue of homophobia in general and about music’s role in reflecting/informing people’s values (and, crucially, actions) around it. i agree with robert carr that “If the dialogue is going to be effective, it has to be clear that it is an internal dialogue, not something imposed from outside influences with different agendas.” but i’m not exactly sure where we draw the lines of internal/external. these lines are blurry. i hear TOK’s as well as more “homegrown” anti-gay sentiments here in cambridge, MA, and jamaican citizens (a large number of whom live outside of JA, let’s remember) encounter various perspectives, in public and private, with regards to sexual orientation. there are no discrete communities or cultures in the world. they all intersect and overlap.

so we’re in this together, don’t?

or to put it some other ways:
no man is an island. no island an island either. i land is your land. etc.

[quick technical note for those who care: i’ve pitched down the mathis version a bit, and i pitch up the TOK as the mathis modulates (twice!).]

here it is again:

wayne&wax (TOK vs. Johnny Mathis), “do you bun what i bun?“
[audio:http://wayneandwax.com/riddimmeth0d/wayneandwax_do-you-bun-what-i-bun.mp3]