Despite my relative silence here this summer — about which, more soon — big tings a gwaan, especially as the fall semester rolls around.

First up, I’m thrilled to report that I leave today for Rotterdam, my first visit to Holland / the Netherlands! I’m fortunate to have been invited to participate in a conference gathered around an exhibition on Bengali film at De Nieuwe Oogst — 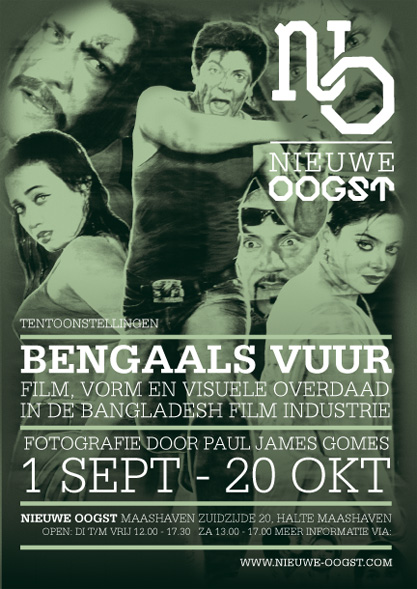 You might be wondering what I have to say about Bengali film, but you’ll have to ask me after the weekend is over for that. Happily, the conference organizers are using the event to stage some broader conversations about media and popular culture, and I’ve decided to take the opportunity to organize my thoughts around a topic that’s been bubbling up on my blog from time to time: Dutch club music — or more specifically, the contrasting media ecologies and aesthetic affinities between 90s bubbling and 00s dirty house / moombahton. In other words, Dutch club music from Moortje to Munchi, with a lil Afrojack along the way. Or in other words:

Holland’s bubbling scene of the 1990s was so unremittingly anchored in local sites of realtime production and material circulation that in two decades, with few exceptions, the genre has hardly migrated beyond Rotterdam and the Hague. In marked contrast, contemporary Dutch house producer Afrojack, whose style audibly emerges from a national club music inspired by bubbling’s distinctive take on foreign but familiar forms, could credibly be counted among today’s top-tier producers of global dance-pop (if often overshadowed by US-based partners such as Diplo and Pitbull). Moreover, Afrojack’s remix of “Moombah,” slowed down several clicks by a Washington DC-based DJ named Dave Nada, has served as the basis for an emergent genre, moombahton, that enjoys a similar breadth of engagement and international circulation, but with relatively little attention to questions of Dutch origins — again, offering a striking departure from bubbling’s insistent locality and marginality. Although at a glance, then, the formal aesthetic qualities of mid-90s bubbling and today’s moombahton might have a lot in common — highly referential and resonant drum loops, Afro-diasporic signposts, a strong embrace of denatured synths and samples — a closer attention to their particular contexts and technologies of production and circulation can reveal striking shifts in the cultural politics of urban Holland, and the wider wired world, in an age of digital and so-called “social” media. Tracing the shapes and forms of Holland’s club music from bubbling’s Antillean counterpublics to the multicultural mix of participants addressed by Dutch “dirty” house and moombahton, this paper examines the distinct media ecologies that fostered the rise of such styles while considering the implications for understanding how musical media can facilitate forms of social collectivity and interaction, mobilization and disarticulation, audibility and illegibility.

See here for the full program. I’ll be giving my talk on Friday, Sept 1 at 11:45am as part of a panel addressing questions of “Urban Form.” Even more exciting (for me anyway), I’ll be DJing an afterparty on Friday night alongside Munchi himself! (not to mention State of Bengal and Nafer Loves You) It’s gonna be fun connecting all these dots! Sentello velocity indeed…

The second upcoming event I want to mention here is another DJ gig of sorts. On the evening of September 7, I’ll be performing at openLAB_03, a gathering at Harvard’s cool new experimental research unit, metaLAB, happening in conjunction with the Berkman Center’s iLaw conference.

The directors have been using the openLAB event series to present projects from Boston-area artists and share ongoing metaLAB experiments with the public. The theme of openLAB_03 is remix/curation of media archives (“broadly interpreted,” I’m told). Along these lines, they’ve asked me to reignite the Boston Mashacre/Smashacre stuff I worked up a few years ago, and I’ve decided that the next chapter in this series of sonic explorations of Boston’s sound(scape) will focus on radio transmissions.

Although I haven’t had a chance to write about the subject here yet, I’m deeply interested in how Boston’s radio landscape offers a uniquely audible picture of the city and the people who live here. The vivid, if often muted, presence of low-power and “pirate” radio stations — especially emanating from Caribbean communities — is something I’d like to explore, and accentuate, especially alongside the crushing amount of hi-fi, ClearChannel, middle-of-the-roaditude that saturates the airwaves here. In terms of aesthetic procedures, I plan on toying with degrees of distance and difference, signal and noise. To that end, I’ve been making my own “personal” (and/or public) archive of Boston radio scans, which I plan to cut up and loop and reassemble in the spirit of, e.g., my 2003 Jamaican radio edit.

Not sure yet about the title — think I’ve exhausted the (s)mashacre schtick, so maybe something like “Towers of Power” — but, at any rate, I hope something suggesting these power relations emerges in the performance. Will share in audio form here once I get a chance to bounce it all down, but please do come to openLAB_03 for the live mix if you’re in the area.

Association with the Berkman Center is always a felicitous thing, IMO, and I’m happy to report that, in addition to this latest bit of convergence, I’ve been selected to serve as one of the Berkman Center’s Faculty Associates for the 2011-2012 academic year (alongside a humbling list of luminaries).

Speaking of the academic year, the fall semester is soon to commence, and although I don’t have time (right now) to go into the long story of my academic employment situation, I’m excited to report that although my fellowship at MIT ended this spring, I’ll be continuing to teach here in the Boston area. I’m offering two courses this fall, one at Brandeis and another at UMass-Boston. I’m delighted to be teaching at both institutions, and very much looking forward to meeting the students. If you happen to know anyone at either place, please help spread the word. In brief the deets are:

1) On Monday evenings from 5:30-8:00 at UMass-Boston, I’ll be attempting to fill the very large shoes of Reebee Garofalo, who is retiring, teaching his perennial and popular course on the “Social History of Popular Music.” This is a great opportunity to dig into the question of the “popular” and how it opens into, emerges from, and informs social history. I’ll share the syllabus here as soon as I’ve got it into good enough shape. It’s being offered through the American Studies department (AMST 235).

2) On Tuesday nights from 6:30-9:20 at Brandeis I’ll be returning to the topic of “Reggae, Race, and Nation” for the department of African and African American Studies (AAAS 171a). The syllabus will not look too unlike my Global Reggae course for MIT (now on OpenCourseWare!), though I will be tweaking it a little, of course.

These topics are near and dear to my heart & work, and I feel fortunate (if a little undercompensated — twice the teaching for 20% the pay!) to be able to continue thinking and talking about music, popular culture, and social history & theory for a “living.” Nice work if you can get it. Do help me out by directing good students my way!

Hope to see some of y’all at some of these things. And I promise to fill you in on my Summer of Relative Silence very soon. Also, I’ve got some pieces of writing to share. Soon come, patient readers, soon come.