Before I get too ensconced in the Windy City, I’d like to send a little musical farewell (for now) to my dear hometown. A follow-up to last year’s “Boston Mashacre,” the “Smashacre” has been in the works for a while now. It’s not simply a sequel, though, it’s a different thing in kind.

“Smash” is not just an attempt to be clever(er), it’s an expression of my desire to explode the very notion of the Boston soundscape I was trying to explore a little over a year ago. Whereas the “Mashacre” offered a meditation on the city’s musical and social life by bringing together some of Boston’s best known acts, regardless how incongruous the juxtaposition, the “Smashacre” presents a series of sonic snapshots intended to unseat stereotypes about the musical and cultural lines drawn around this enduringly provincial yet deeply cosmopolitan town.

Not to glorify the project any further (which should also be heard as simply a way to bring attention to some of my favorite slices of the city’s soundscape) — but a passage i read recently in Phil Bohlman’s Very Short Introduction to World Music resonated with some of my underlying motivations when dreaming up and putting together this mix. Describing Harry Smith’s remarkable Anthology of American Folk Music, Bohlman argues:

Smith was perhaps slightly less interested in what he was including in his anthology than in just being inclusive; his concern was to allow music to remap the cultural history and geography of the United States and to do so by dismantling the borders between American folk music and the world. (45)

I don’t mean to imply that I’ve been less than selective here, or that inclusiveness was my main objective, but I have given a lot of thought to how a broader understanding of the Boston soundscape — what’s in it and what that tells us about us — might similarly remap the cultural history and geography of this well-drawn town. So what I’ve assembled here generally sidesteps the pop and pop-rock referents of last year’s “Mashacre” and instead claims for the Hub’s sonic profile some homegrown hip-hop, bellydance, ska, new jack, quirk rock, boss bounce, and reggaeton, among others. Although I still attempt to make some gestures toward breadth and familiarity, including some poppy faves, in general I have tended here to the obscure, to the weird and the dark and ironic-exotic, seeking to plumb the town’s dirty water depths more than skim its surfaces.

I should note again that this is by no means an attempt at canonization; it’s an anti-canonical gesture if anything. The “Boston Smashacre” is but an idiosyncratic slice of a soundworld I have known and loved and lived.

In terms of technique, I am doing more mixing than mashing here, playing tracks sequentially more than simultaneously, though there is rarely a place where only one song is playing and I often let a single track or loop undergird several others in a row before letting it “play itself out” in some manner. I do this with such unobtrusive but compelling grooves as those I’ve cut’n’pasted from George Abdo’s “Raks Araby,” Luny Tunes’ 2004 Re-lick of the Dembow, and Big Digits‘ big bassline from “Music Is Magic.” I’d like to think — though it’s more a technological than aesthetic overlap, not that those are so separable — that this practice of letting barebones loops run for a relatively long time over the course of a mix resonates with recent movements in techno, etc., as described not long ago by the good Dr.Sherburne. You’ll see below that there are a number of recurring and long-lasting files in the mix. 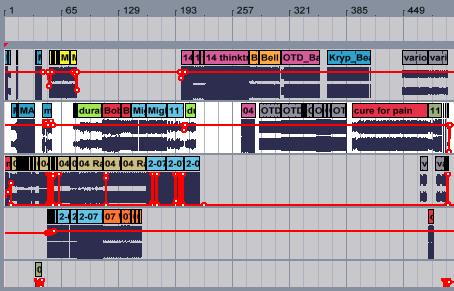 You can either stream the mix with the player below, download it as an mp3, or — and I strongly recommend this option — you can get it specially delivered to your cpu/pod/etc via the brand, spanking new w&w podcast, i.e., the “waxcast”: just copy the xml link below and paste it into whatever it is you use to subscribe to ‘casts (e.g., iTunes). Through the magic of xml, I promise to deliver semi-regular, relatively longform musically-expressed ideas about music directly to YOU dear reader listener.

But enough prelude already here’s the mix’n’mash I’ve been telling you about:

Moose and the Mudbugs, stage banter
I dunno what exactly makes “we’re beggin” sound so damn Bawstonian. It’s more than the dropped r, but whatever it is, it’s friggin classic. Moose represents hahdcore.

DL, “MASSterpiece”
How could I resist a verse which runs down the redline in rhyme? — never mind a Cheers sample!

George Abdo, “Raks Araby”
Classic Porter Square bellydance music, as released by Smithsonian Folkways; yeah, you read that right. Ah, to have been a fly in the hummus back in the day.

NBS, “Nothin’ but Stacks”
Couldn’t resist grabbing this snippet, even if they say “massacka” instead of “smashacka” —
Bridge rappaz repre- (I don’t even have to say it)!

Moose and the Mudbugs, more stage banter
As heard on the r-m l-r mix!

Luny Tunes, “Dembow (2004 Version)”
I see no good reason why Boston shouldn’t claim this dynamic duo for the town’s musical legacy. I mean, they spent their formative years in Peabody and Cambridge, fa chrissakes!

Morphine, “Cure for Pain”
Always loved this tune, loved that it could rock MTV, and never quite could believe dudes were from Boston; they just seemed a little too hip for this town. I know better now. Boston miss ya, Mark.

Bobby Brown, “Every Little Step”
What more need be said besides “good to good to good to go solo”? Ok, a lot, but let’s focus for now on Boston’s remarkable national showing during the new jack swing years.

Pixies, “Where Is My Mind”
Just a tease, but a satisfying one all the same; another major putter-on-the-map for Bawstin rawk.

Twink, “Whose Turn Is It”
Wacky sample-based kids-music collages could, of course, come from anywhere; this delightfully twisted example, however, comes from the Commonwealth.

Foundation Movement, “Durak”
Had to bring the track back to let the ambivalence out. (Thx to E Roc for the swell acapell.)

Thinktree / DJ Flack, “Hire a Bird” / “Story of Oh (DJ C mix)” (DJ Pace blend)
Props to Pace for digging up an early 90s classic from one of the most inventive rock bands I’ve ever heard and mashing blending it with a DJ Flack dancehall stomper (as remixed by DJ C for the Mashit label). Couldn’t resist a track that brought together 3 of Boston’s best DJs (and, yes, Riddim Methodists all) and the incomparable Thinktree.

Almighty RSO, “One in the Chamba”
Benzino Schmenzino, this is a Boston hip-hop classic (if a bit heavy to let play too long in this context).

Bell Biv Devoe, “I Thought It Was Me”
Sorry, I just couldn’t resist another new jack number, especially from the boys of BBD.

Big Digits, “Music Is Magic”
As mentioned above, a killer bassline, just to add a lil something; later, I dub out some of the Digits’ lyrics as a DJ C beat enters (see below).

Bang Camaro, “Push Push”
Originally heard via OTD, this one was rightly nominated for ‘Song of the Year’ at the Boston music awards; fun stuff, quite-zeit-geisty, ironic-virtuosic and impressively pulled-off. Keep on pushin’, boys.

Andrew Scandal, “Cure for Pain”
A Boston-bounced Morphine cover, sung by an old friend and collaborator and co-produced by yers truly.

NBS, “It’s Crimebridge”
Although the term “Crimebridge” cracks me up (no offense, Rah), I def dig the neighborhood shout-outs. Slightly “screwed” as it is, the track works well with /rupture’s disorienting barroom blasts.

DJ /rupture, “cheerz”
Sometimes you want to go, no?

So the “Smashacre” finishes by asking, as it began, if more hesitantly and perhaps a tad painfully, wouldn’t you like to get away?

But I’ll be back.

gifford by u know who