On the 243rd anniversary of the Boston Massacre (bigup Crispus Attucks!), I’m reposting the merely titular-pun-related mix of Boston-associated songs I cooked up for the Somerville Art Council back in 2005. This is also (barely) germane to the day given the currently flaring debate over Massachusetts’ official rock song. (As they say around here, I shit you not.) Not to mention, if only very tangentially, the emergence of one of the best mashups in years. (Really love how it reproduces the effect of that ol’ Eminem/Britney mashup, revealing the underlying pop sensibilities of two putative hardcore outsiders.) Without further ado, here’s the Boston Mashacre (my follow-up, the Smashacre, resides over here)…

we begin with sounds of the davis square farmer’s market, with several different languages being spoken, including what sounds like a guy saying “habibi.” the percussion is an empty soda bottle that another guy was banging on his hip, quietly singing what sounded like a reggae song at the same time. confirming my impression, yet another guy–this one a farmer/vendor–walks up to him and says rather dryly, and to my incredulous ears for stumbling upon such a soundbite, “champion sound, yeah?” from there, the man with the bottle plays a classic 3+3+2, reminiscent of so many caribbean styles, and we hear car alarms and horns spin into melody. as a bus pulls up and takes off again (and “buses” was one of the most popular returns i got to the question “what are the sounds of somerville?”), the familiar strains of the standells’ “dirty water” enter the soundscape and the mix. from there, the incidental sounds of the city–which, as you can hear, are rather musical in their own way–yield to the “musical” sounds of the city. that is, we enter the realm of pop recordings, of the boston soundscape as MOR radio presents it (at least as filtered through the ears of a lifelong boston jerk who harbors a strange mix of pride, humility, and humiliation when it comes to the sounds of his city).

after the standells, the lineup moves through a number of boston mainstays and one-hit wonders, has-beens and shoulda-beens. the full tracklist is as follows:

the standells, “dirty water” (not a boston band, but they might as well be)
the cars, “you might think i’m crazy” (yup, a boston band)
dj c, “boston you’re my bounce” (beat research)
NKOTB, “hangin’ tough” (omg! jordan is my fave lol ;-)
mr. lif, “home of the brave” (so he lives in berkeley now, and what?)
tracy chapman, “fast car” (used to play T stations)
extreme, “more than words” (found an acapella!?!)
aerosmith, “walk this way” (nice break, dudes)
run DMC, “walk this way” (better break, jam master)
NKOTB, “the right stuff” (williamsburg where ya at?)
bell biv devoe, “poison” (girl, i must warn you: i know that BBD album by heart)
the cars, “just what i needed” (uncanny how the intro mirrors BBD’s)
j geils band, “angel is a centerfold” (urbody whistle now)
boston, “more than a feeling” (guitars are for dorks)
ed O.G., “i got to have it” (representin’ the bean harder than guru since 1991)
MBTA, “davis square redline stop” (a wicked hahd-to-find recording)

listeners will notice that some of these tracks are in more fragmentary form than others. (hope not to leave anyone hanging too much, but you should seek out the originals in that case.) as with most mixes, it was the tracks’ suggestive qualities and affective resonance that i was going for–not some sense of their textual wholeness. this is however less a mix or a mashup, per se, than what might be better called a mix’n’mash. at times, i play songs on their own, though more often than not i play two or more songs at once (or instrumental versions/loops of them).

the sound and shape of the music i am making here is a product of the technology that i am using: ableton live. having the relative freedom to stretch tempos without changing pitch allows me to match a number of songs together that the average vinylist couldn’t/wouldn’t. of course, i also change pitch sometimes, purposely, either to make a harmony sweeter or to weird/chipmunk something out. generally though, at least in this case, i have preserved the original pitch/key of the songs in question, which i think makes them much more recognizable. the changes in tempo are less noticeable. you’ll notice i like the echo button, too. 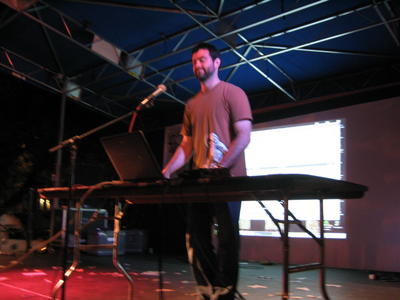