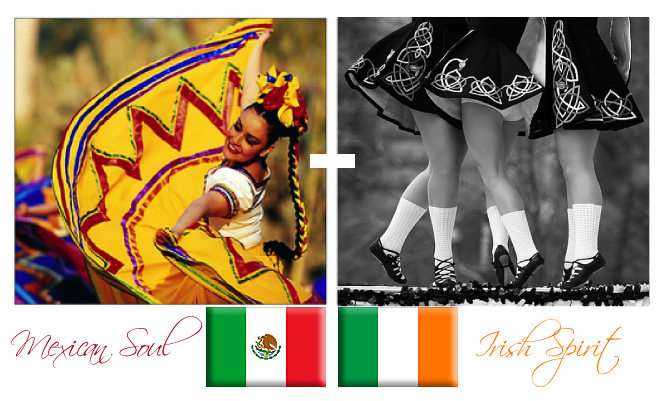 I’m happy to announce, and not a moment too soon, that I’ve arranged some festive music for today.

When I put together my first St. Patrick’s Day mix some years ago, it was an obviously tongue-in-cheek gesture. You might recall that I began with House of Pain before bringing in the romping stomp of the Timelords’ (aka KLF’s) “Doctorin’ the Tardis” — a formula-breaking (if formula following!) ravetastic classic that seems to anticipate mashups and jock-jams alike.

Consistent with the track’s logic — and often in shuffle-step with its triple-time roll — I mushed together a bunch of iconic Irish jigs & ballads and (corn-)beefed them up with electronic dance propulsion. Not all the festive selections had the 6/8 swing that interlocked with the proto-shaffel Timelords track, so I teased it in and out of the mix. Here ’tis again:

But that was then, and this is now.

Readers here are no doubt familiar with tribal guarachero, the Mexican techno mutation centered in Monterrey and DF, which has enjoyed an enthusiastic, international reception among DJs, listeners, and bloggers in the last year. You might also be aware that the genre’s distinctive rhythms happen to line up perfectly with some of these jiggy Irish jams. Or maybe that’s never occurred to you. Given this tempting correspondence, I decided to cook up a little tribal irlandese for El Día de San Patricio — or, if you’ll permit an irresistible but probably awful pun, tribal greengo.

Before I launch into the backstory, let me present the 2011 version for your St. Paddy’s party pleasure (some standalone tracks are available at the end of the post, FYI):

You may have heard the story, recounted here, that the term gringo derives from 19th century pop songs sung by Yankee invaders that began with (and repeated in every chorus) the words “Green Grow,” a sound that became so associated with foreign presence, it became the name for it.

John Ross, the longtime resident of Mexico (City), American activist, and recently deceased author of the epic El Monstruo (which I’ve quoted here before), tells the tale of the “greengos” in a section of the book bearing the heading, PINCHES AMERICANOS. “Of all the invading armies,” writes Ross, and he recounts a great many in Mexico’s history, “the Yankees were the most annoying.”

The US had long coveted and sought to annex, as Ross carefully puts it, “the vast, sparsely populated (except for 200,000 native peoples) northern territories of Nueva Galicia that Mexico had inherited from Spain.” In the mid-1840s, the “expansionist” President Polk began taking action. As Ross explains, despite its association with another set of conquistadors, “greengo” was not always clearly an epithet:

With his headlights set on the 1848 election, Polk promised the American people a “short war” (where have we heard that one before?) and orchestrated a Gulf of Tonkin-like provocation at Matamoros, drawing Mexican troops across the Río Bravo where they managed to whack a few Americanos. Polk wept at the death of the Yanqui soldiers — “our blood has now fallen on our own soil” (sic) — and organized a five-point invasion of Mexico. The U.S. Navy sailed into San Francisco Bay, and Los Angeles was besieged by Kit Carson and his irregulars in Alta, California. Marines landed at Mazatlán on Mexico’s Pacific Coast. Zachary Taylor would swoop south from Tejas, and grizzled old General Winfield Scott landed in Veracruz and followed Cortez’s footprints to the Halls of Moctezuma.

Starting out in the spring of 1847, General Scott directed his army to take Tenochtitlán, encountering, as expected, little resistance from the Mexicans. Indeed, like Cortez, Scott forged alliances with disaffected Mexicans along the route — the “Polkos” rejoiced in the Americano invasion. As the Yankee Doodle Dandies climbed into the antiplano (highlands), the sang the popular songs of the day, one of which, “Green Grow the Lilacs Oh,” became their signature tune, and forever they would be known as “greengos.” (71-2)

Whether affectionate or pejorative initially, the term survives today, and over the years I think it’s safe to say that it has taken on some real sting. (That gringos remain perennial invaders of Mexico can’t help.) And why shouldn’t it sting? What we in the US call the Mexican-American War is remembered in Mexico as “El Gran Despojo — the Great Robbery.” Here’s Ross again, taking stock of what was settled by the Treaty of Guadalupe Hidalgo (signed on 2 feb 1848), which

ceded the Americanos all the land from the Río Bravo to Wyoming, 13 western states from Iowa all the way down to California where gold had just been discovered, 1,572,741 square kilometers, a land grab the size of western Europe and fully 51 percent of Mexico’s geographical territory. Mexico got nothing in return. (74)

The story of the “greengos,” regardless of its veracity, offers a provocative opening for a little musical project I’ve been plotting. The prominence of music in the term’s myth of origins is, of course, a nice touch — not to mention the color green. But the Irish-Mexican connection, and the significance of this story (and this war), is deeper than a colorful coincidence. Irish people have been living in Mexico for centuries. (Indeed, an image search for some fodder for this post turned up a small cottage industry around “Irish-Mexicans” — with or without injunctions to kiss one.)

Perhaps the best known Irish arrivals in Mexico are a group of soldiers who famously switched sides during the Mexican-American War. These notorious turncoats, a preponderance of whom were Irish, are known (fondly in Mexico) as St. Patrick’s Battalion, or El Batallón de San Patricio — national heroes of a sort, whose sacrifices (many were ultimately hanged as traitors) are celebrated every September 12 on the agreed-upon anniversary of their executions, as well as on March 17, today: the feast of Saint Patrick, patron saint of the Irish in general and this battalion in particular.

Many reasons are given for their extraordinary act: not merely deserting, but taking up arms for the other side. Like their European compatriots in the Batallón, Irish immigrants enlisted in the US army in exchange for pay and land, many having fled the Potato Famine. Mistreated at the hands of Protestant superiors, some soldiers found themselves more sympathetic to the cause of their Catholic brethren in Mexico. (Notably, Catholic churches in Texas were terrorized in the years of provocation that became the “run up” to the war.) Indeed, such sectarian appeals were allegedly part of a Mexican recruitment campaign. They fought bravely alongside Mexican militia members — sometimes a little too bravely: a few desperate San Patricios, refusing to surrender (for it was death on the battlefield or death by hanging, perhaps after a good lashing and branding), physically rescinded their comrades’ attempts to wave a white flag, even killing a couple Mexican soldiers in the process.

While reading up on the Battalion, I discovered a felicitous fact: they “first fought as a recognised Mexican unit in the Battle of Monterrey on 21 September 1846, as an artillery battery.”

Battle of Monterrey? Artillery battery? Sounds like 3ball to me! 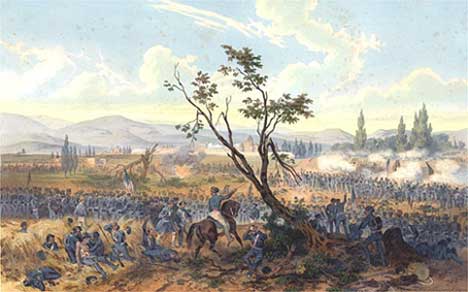 The foregoing isn’t intended as an elaborate bit of cultural baggage to freight some frivolous mixing and mashing. I simply mean to share some of what goes through my head as I work on such a juxtaposition and reflect on what it means for someone like me to make something like this. Far as my relation to the San Patricios, it’s not all that clear to me that we’re not already embroiled in a war with Mexico (and one with a grossly disproportionate deathtoll), but if the US ever did formally declare war on our neighbors to the south, I’m pretty sure where my sympathies would lie.

Beyond the connections I trace above, and the shared rhythmic sensibilities of jiggy & guarachero shuffles, tribal irlandese cultivates other types of possibly productive symbolic ground too. For just as St. Patrick’s Day and Irish heritage more generally (at least in the US) have been blown up into cartoonish proportions (certainly a sickly green sometimes) — in a sort of auto-essentializing practice — tribal/3ball producers in Mexico frequently play with figures of “tribal” identity whether Aztec or African (and often both, as Jace notes in his excellent profile of the scene). I didn’t go so campy on this mix as with Doctorin’ the Guinness (which includes a version of “Danny Boy” for chrissakes) but I want to note that a certain kitsch factor is unavoidable given my points of departure.

Essentially, what I’ve slapped together here is a series of mashups, in both mini-mix and standalone form. I didn’t have a lot of time to work on these (and, at bottom, it’s still a novelty act — I don’t expect these to be listened to beyond mid-March, or just today), so I went looking for relatively easy correspondences, matches that didn’t demand too much pitching around, tempo tweaking, or super-precise attention to form (though, naturally, I’ve attended in some detail to all those things).

Given that these contain such large chunks of other people’s productions, let me give an extra big thanks to: on the Irish side, Column MacOireachtaigh & the Irish Ceili Band, the Dubliners, and Tommy Makem & the Clancy Brothers — from whom I’ve generally borrowed whole tunes; & on the Mexican side of things, from whom I’ve borrowed a mix of loops and partial tracks, Shark DJ, Erick Rincon, DJ Mouse, an uncredited producer (on an MP3 CD I bought in DF) who made an awesome track called “Raspale” that sounds like it samples Buju’s “Walk Like a Champion,” and, last but not least, a brief bit from 3ball ambassador Toy Selectah‘s new album (which is a major banger, btw).

If nothing else, mashups always offer a ripe opportunity for playing with titles. That said, I present to you: the mini-mix (again) & three standalones (y’know, just in case you’re DJing just the right gig tonight) —

I could have stuck to more percussive sections of the Mexican tracks, but I wanted to represent tribal bass and melody too, so I was glad when a needling guarachero synth melody seemed to dovetail with the pentatonic heterophony of the jigs and reels. I’m not saying these things ever really match up. There’s a fair amount of strange stuff going on here, harmonically speaking. Pardon any sour notes in your doctored Guinness! Generally, I hope I’ve been able to do the main things I wanted to: 1) let you hear these two musics alongside each other, and 2) give your St. Patrick’s Day just a little extra push in the tush.

If you’ll permit me one final dedication: to San Patricio, his Batallón, and leprechaun-like dancing shoes!

Oh, and here’s a video of the mix as assembled with Ableton, just in case you’re curious as to what’s what and how I’ve chopped things up —