Although I initially posted this mix in November 2005, springy days like today — it’s nearly 70 degrees and flowers are poking out of the ground! — always seem like just the right setting for my dubby take on dub, as prepared a little over 5 years ago for bredrin Brynmore‘s erstwhile weekly, Heavy Dread. The mix has really weathered the years, IMO, all the better with weather like this. (I’m still particularly pleased with the funny, sentimental ending.) Here goes again… 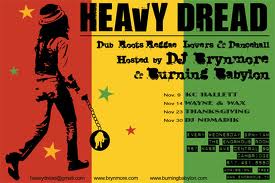 i call the mix “dubble dub” because i’m playing a bunch of dub tunes (from across the dub spectrum, and a few from beyond) and treating them as a dub producer treats individual tracks in a mix, applying plenty of echo/delay and reverb and working with layers of sound as layers of sound. i also apply some digital-age tricknology, cutting and looping fragments of tunes and often time-stretching tracks to maintain a steady tempo for much of the mix. because the tunes are already dub tunes, many of them brimming with effects and edits, i’m essentially doubling-up on the dub – thus, “dubble dub.” (a phrase which barrington levy, thankfully, almost said, which makes for a nice little intro.)

in terms of song selection, my idea was to try to represent the dub tradition in some breadth and depth. so i drew ecumenically from across the spectrum: early, classic dub/DJ experiments; later, dread-ful dub; 80s digi-dub; heavy UK dub mutations; european minimal techno dub; new york illbient dub; and a few tracks that aren’t dub at all but get the dub treatment, mashed up with dubby loops and echoing along with that lovely ol’ 3:2 jamaican/caribbean/west-african polyrhythm that dub consistently brings out of even the most foursquare music.

the sequence is guided by musical matches and mashes. for example, the vintage drum machine running through lee perry’s “dub revolution,” mad prof’s “boombox,” and shuggie otis’s “aht uh mi hed” (i’ve always wondered whether that’s an attempt at patois) provides a nice audible thread, among others, with which to weave these seemingly disparate tracks together. in other cases, it’s just a matter of time or tone. overall, i try to maintain a good vibe – a proper meds, seen? – while keeping the music and the mood flowing. mostly, i just enjoy the echoes: across beats and bars, land and ocean.