NASA’s announcement in December about our impending arsenic-based overlords caused quite a stir, followed by a fair amount of disappointment. Despite oddly worded reports suggesting that “NASA has discovered a completely new life form that doesn’t share the biological building blocks of anything currently living on planet Earth” (his emphasis), it turned out that NASA scientists had not encountered an actual extraterrestrial lifeform, only that they had (allegedly) “discovered” — more like, tricked into being — a form of life that departed enough from conventional understandings (by processing arsenic in place of phosphorous) that it is practically alien, and as such has implications for the study of extraterrestrial life: namely, that we need not expect life from elsewhere in the universe to look quite like it does here.

Of course, tantalizing as it may have seemed, NASA’s press release was also, in retrospect, fairly dry and careful, promising no more than “an astrobiology finding that will impact the search for evidence of extraterrestrial life.” But for those who nonetheless had fantasized about a closer kind of encounter, do I have news for you. 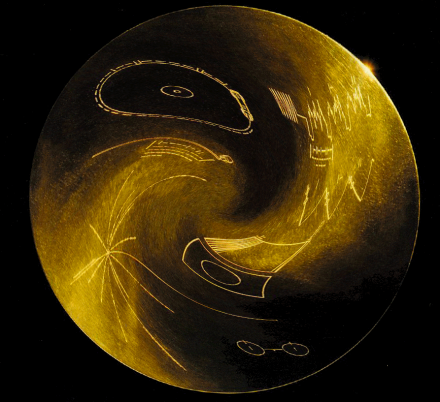 Put aside for a moment your suspicion that aliens might be sending us interstellar 419 scams. Why not audio edits? We did, after all, launch a big ol’ golden phonograph into space some 33 years ago. What if the Voyager record found its ways to alien “ears” (or intelligences, anyway) after all? What if the response was to scramble and reassemble our own sound and syntax and to send it back earthwards? And why not send remixes with a cosmic twist of the critical dagger?

That’s the contention, anyway, of the SETI-X collective, a group of scientists exiled from the Search for Extraterrestrial Intelligence consortium responsible for the ’77 Voyager record. SETI-X has released a CD, Scrambles of Earth, which purports to present a collection of decoded remixes from outer space:

In 1977, NASA launched the Voyager 1 & 2 spacecraft, fastening to each a phonograph album containing sounds and music of Earth. If the best calculations are to be believed, one of these records was intercepted and “remixed” sometime in 2005 by extraterrestrial intelligences on the edge of our solar system. The Search for Extraterrestrial Intelligence in Exile (SETI-X), a dissident offshoot of the better-known Search for Extraterrestrial Intelligence, in 2010 finished decoding signals believed to be transmissions of these “remixes.” Scrambles of Earth, unauthorized by a skeptical SETI, is SETI-X’s document of these audio signs of possible alien intelligence.

But beyond that, what’s striking about the discovery of these transmissions is that they would appear to offer a critique of everything from the original project’s colonial overtones to the absurdity of the copyright regime’s claims on the record. As the liner notes speculate:

It could also be that the aliens were unmoved by Voyager’s musical program and sought in their version to reprimand Earthlings with an obnoxious response to what Sagan and others modestly termed, in the title of the explanatory coffee-table book, Murmurs of Earth.

There are some stunning procedures on the disc, including a selection where the amplitude envelope of an excerpt from Bach’s Well-Tempered Clavier is apparently used to modulate the pitch of Andean drums, or a number of looping sections that perhaps suggest, as the careful liner notes point out, “artifacts of earthly deconvolution technologies.” And yet —

Even through the translatory medium of all-too-human audio algorithms, however, it is apparent that the aliens are playing fast and loose with complex intercultural questions and flirting with copyright violation on an interstellar scale.

Here, the aliens have worked with classically ethnomusicological recordings of two fourth world peoples, the Navajo and the Yoingu residents of Milingimbi, Australia. The resulting fusion of a Diné night chant with “Devil Bird” may at first hearing remind the listener of “world music” fusions, though unlike most of those efforts, here the indigenous voices are not snipped into small bits/beats. Rather, it is the chordal composition of a member of the first Viennese school, Mozart, that has been so treated. This interpretation depends, it must be said, on imagining that aliens parse figure and ground in ways similar to the purveyors of worldbeat music, whom, evidence suggests, they loathe.

The people at SETI-X are looking out for additional transmissions and transpositions. Let’s just hope, if any come in, they don’t start sounding too phishy.

PS — I’m pleased to report that representatives from SETI-X will be joining us TONIGHT at Enormous Room for a special Beat Research session. To help celebrate their stunning discovery, Flack and I have invited some local friends to dig through the cosmic bins of their record collections and unearth all their deep space footage. So in addition to the SETI-X reps, Tim of A Stack of Dusty Records, the co-owner of Mystery Train Records in Gloucester, MA, will offer some thematic accompaniment, VJ Dziga will mix’n’mash rare NASA footage and other alien sights on the big screen while TDOGG explores further levels of photon manipulation. It’s gonna be out of this world!

1 thought on “Musical Encounters of the Fifth Kind?”