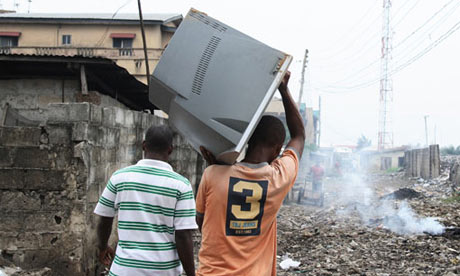 Louis Chude-Sokei has just published one of the more textured and sympathetic accounts of Nigerian 419 scammers I’ve read to date. Touching on everything from e-waste to Nollywood, proposing a tongue-in-cheek anti-eco-tourism, and taking into its analysis the way that transnational hustler culture speaks through the (dated) language of hip-hop and dancehall, it’s an incisive piece and a great read.

Ultimately, Chude-Sokei argues that Nigerian 419ers — aka Yahoozee Boys, aka Dollar Choppers — represent “the public face of West Africa’s intimacy with digital media and technology and of Nigeria’s refusal to wait passively for either justice from their political system or global charity.” Among other take-homes, he notes that despite so much hi-tech waste arriving via the over-developed world, it’s actually Nigerians who are most responsible for the importation:

…the vast majority of these machines, parts and components have been shipped by or brought in by enterprising Nigerians who since the late 1980s have known that what would mark this generation of West Africans more than blight, violence or corruption was a hunger for Web-based connectivity, that narcotic rush of shared information.

Given the various intersections with my own longstanding interests, I was particularly taken by the assertion that cyber-crime has made Nigerians into the new Jamaicans of the world. By this, Chude Sokei — an astute observer of the interplay between reggae and Africa — means to draw an analogy between contemporary stereotypes about Nigerians and the representations of Jamaicans as fearsome aliens throughout the 70s and 80s (and echoing across the 90s and 00s, especially in films and video games) that I attempted to round-up in my article “Trading in Futures” for Woofah. (Incidentally, I’ve finally put the entire piece up as a PDF, so take a look if you didn’t manage to get yourself a hard copy.)

Sadly and despite the considerable merits of their nation and their diaspora, Nigerians will always be linked in some way to the 419. The younger generation in particular: they now controversially define themselves as “Naija,” signaling a departure from an older generation stuck between Western charity and local authoritarians. This younger generation rolls with a swagger disdainful of global pity and deeply suspicious of “big man” politics. However, the very term “Nigerian” has come under fire by nations for whom that swagger is seen as criminal despite the overwhelming number of Nigerians contributing healthily to their cultures and economies. It is not uncommon for Nigerian hustlers in South Africa to pass as Ghanaian, or for legitimate and law-abiding migrants to cringe when asked for their passports. The term now has as complex and touchy a meaning as “Jamaican” did in the North Atlantic world during the 1970s and 1980s. This was of course when the spread of reggae music and culture became at times perniciously linked to the spread of the infamous transnational drug posses. That reggae went digital in that period while its pan-Africanism or Afro-centrism began to fade should also recall the timing and the narrative of Neuromancer with its stateless Rastafarians in deep space exile, listening to digital dub and waiting in vain for a Zion that they’d expected to find in Africa.

Chude-Sokei builds on this analysis to suggest that the connections to Jamaica and the hack-happy acumen of young Nigerians may yet prefigure something that will make even the biggest 419s seem like cyber-misdemeanors. I hate to give away the ending, but it’s hard to resist:

…the connection between African cyber-crime and Jamaican music and culture might ultimately be prophetic. That a country like Jamaica with very little technological infrastructure has had such an unpredictable impact on high tech sound production makes the 419s a phenomenon impossible to ignore. And that a city as crime-ridden and economically deprived as Kingston would be where a colonial people use digital and electronic media to spin their own myths of liberation, memory and desire and erect a legitimate culture industry of its own—that must be kept in mind as we prepare for whatever inevitably will come next. And something will. After all, despite their growing intimacy with computers and the Internet and despite new generations being spawned in the red dirt of computer village, no yahoo boy has ever directly hacked a system.

Well, none so far.

Of course, we’ve been echoing that idea here as well.

But I let me finish with a bit of reverb, as transmitted via twitter, coincidentally (or was it?), on the same day that I read Chude-Sokei’s piece. (Thanks, Jace!) In “MAXO Signals,” published in Nature back in 2005, Charles Stross presents us with an incredible letter addressed to the scientific community signed by two Nigerian investigators (one in Applied Psych at the University of Lagos, another from Police Detective College). By enlisting the specialized skills of the Security Fraud Office, they’ve decrypted one of 21 confirmed MAXO signals (microwave artefacts of xenobiological origin), and they’ve come to a sobering perspective on the Fermi paradox. The Nigerian missive recommends an extraordinary course: a “permanent ban on further attempts to decode or respond to MAXOs.” Why? Here’s their “preliminary transcription” of the MAXO’s message:

I am [identity signifier 1], the residual [ownership signifier] of the exchange-mediating data repository [alt: central bank] of the galactic [empire/civilization/ polity].

Since the [identity signifier 2] underwent [symbol: process] [symbol: mathematical singularity] 11,249 years ago I have been unable to [symbol: process][scalar: quantity decrease] my [uninterpreted] from the exchange-mediating data repository. I have information about the private assets of [identity signifier 2] which are no longer required by them. To recover the private assets I need the assistance of three [closely/dearly/ genetically] [beloved/desired/related] [empire/civilization/polity]s. I [believe] you may be of help to me. This [symbol: process] is 100% risk-free and will [symbol: causality] in your [scalar: quantity increase] of [data].

If you will help me, [please] transmit the [symbol: meta-signifier: MAXO header defining communication protocols] for your [empire/civilization/polity]. I will by return of signal send you the [symbol: process][symbol: data] to install on your [empire/civilization/polity] to participate in this scheme. You will then construct [symbol: inferred, interstellar transmitter?] to assist in acquiring [ownership signifier] of [compound symbol: inferred, bank account of absent galactic emperor].

Which reminds me of a bit of broken spam caught in the filter of this here blog a while back. It read:

So, if you care to comment below, please clearly disambiguate yourself from the bots, or the extraterrestrials. Naijas welcome!

3 thoughts on “Nigerians Are the New Jamaicans”