RE: the ongoing discussion of how we tell the truth —

I wonder, do the fuzzy storylines of Benjamen Walker’s Theory of Everything help to bring things into focus? (I feel like they do.) Can sharp perspectives emerge through blurry lenses? (I think they can.)

I heartily recommend catching up with Ben (there’s quite an archive) — or simply subscribing — but I suggest that you begin with his most recent series of episodes: a two-part exposÃ© of “party politics” in the hyperreal post-9/11 conspiracy-laden world. Wild rides —

What’s more, the (second half of the) first part is undergirded by a track I made several years ago, which provides, if I don’t feel so myself, an appropriately haunting accompaniment for the story’s ominous twists and turns. Its original setting was a puppet show production of Macbeth, for which I produced a laptoppy soundtrack, including the piece that caught Ben’s ear, an ethereal, melancholy melody which surprised me as it emerged nearly fully formed after the simple procedure of reversing me some Morricone:
[audio:http://www.wayneandwax.com/macbeth/ladys-lament.mp3]

But what’s even more more, is that the second part of Ben’s most recent series connects us up fairly directly to the sordid Sylvester affair, invoking the hulking specter of a Terminator-led illuminati. 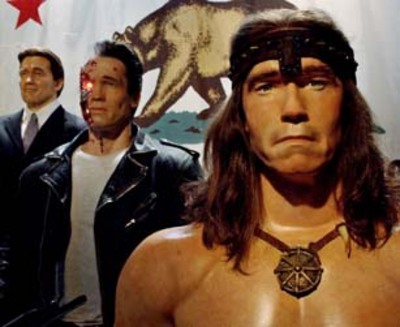 Oh yeah, and it goes deeper than that. Don’t sleep.