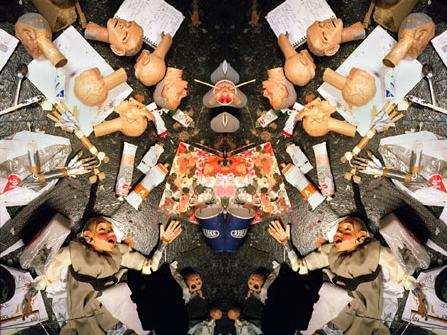 Puppet Macbeth was performed in the Kronauer Space at Adams House (Harvard University) in December 2002. The directors / puppet-makers, Moss Bittner and Emily Carmichael, asked me to produce a score and sound effects for the production, which I played live via laptop during the performances.

I tried to match their vision for Macbeth’s Scotland, which tended toward the spooky,

And I embraced the opportunity to experiment more with musique concrete, sampling a refrigerator to evoke the phenomenological shifts when Macbeth starts seeing ghosts (and then playing with the sound in between scenes),

grabbing and amplifying the sound of Moss knocking on a table to simulate the pounding on the castle door (and then, again, playing with the sound after the scene),

and reproducing, more rhythmically, the din of dinner.