Two birds, one stone: in the ongoing effort to re-host some adventures in riddim meth0dology, this post also continues the recent trend of recommending mixes well-suited to summering. (But plz note — I really do think of this mix as suitable for all seasons.) I’m very happy to (re)present: our Lemon-Red Mix! 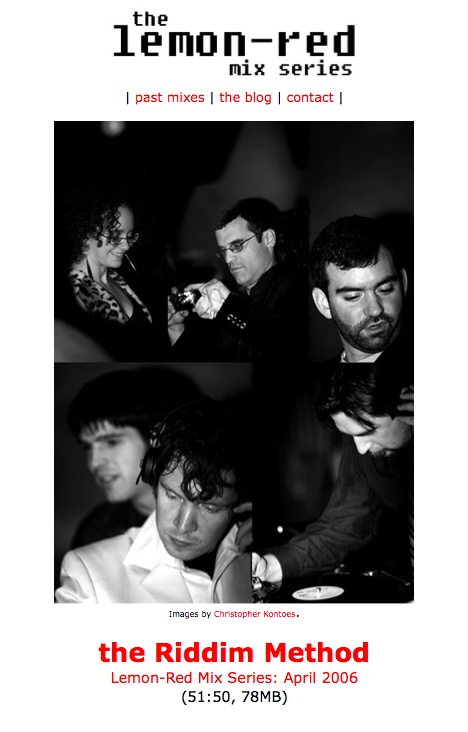 As initially hyped over at Lemon-Red (back in April 2006):

The Riddim Method is a collective of DJs, producers, and ass-shaking academics who formed like Voltron to embark on a group-blog experiment. After years of playing together in various configurations — from Toneburst days to present endeavors in Beat Research — the Riddim Methodists decided in ’05 to share their musico-tricknological discoveries, creations, and conversations on the internerd, hoping others might add their two fifty cents.

From bases in Beantown and Oaktown, the six Riddim Methodists play local and link global. There’s DJ C, who, with remixes for Kid 606’s Shockout Records and for XL Recordings (on MIA’s “U.R.A.Q.T.”) — not to mention raggacentric productions for his own Mashit Records — has been burning up dancefloors on tour and at his weekly residency back in Boston. There’s DJ Flack, C’s co-host at Beat Research – a multimedia maestro who makes video music when he’s not making beats. Then there’s Ripley, rootical rallycry-roaring, breakcoring, copyfightin’, blog-writin’ DJ-slash-activist. There’s Kid Kameleon, a smash’n’mash mixmaster, globetrottin’ DJ, and music scribe (XLR8R, Grooves, Pitchfork). There’s Pace, the vinyl librarian and riddim networkian, a b-school b-boy with deep crates and nothin’ but L.O.V.E. And there’s Wayne&wax, hip-hop scholar since being knee-high to a duck, prolix mu’fucka, and all-around Boston Jerk.

Check the method, but don’t believe the hype :P

Actually, speaking of hype, I would like to note that our mix even got a little Pfork love back in the day, c/o erstwhile (and missed!) music-writer Dave Stelfox. About the mix, Dave wrote —

Assembled by a team including Harvard musicologist Wayne Marshall, DJ Ripley, Kid Kameleon, DJ C, DJ Flack, and Pace, it could fit comfortably in any of Pitchfork’s specialist columns, needlestitching together an array of genres, from dubstep to Dirty South hip-hop, Egyptian shaabi to Baltimore club, reggae to techno. It’s an inspiring ride, cohesive yet omnivorous and proves there are no boundaries in music if you’ve got a little imagination and a whole lot of love for it.

Yeah, that basically sums it up. (For the record, though, I don’t think I could ever be accurately described as a “Harvard musicologist,” though I have done some teaching over there and I do hold a degree — in English — from the place.)

But seriously, this one was a double honor for me. First, it was a pleasure and a privilege to contribute to the illustrious Lemon-Red mix series. Many of us are still missing Lemon-Red. Or to paraphrase everybody’s favorite Guru non-sequitur (again): Lemon-red was a popular blog, and it still is.

For my money (or lack thereof), the L-R mix series, which popped off with DJ /Rupture’s stellar Low Income Tomorrowland, marked the beginning of a new era: the age of internet mixes. Ever since, my iPod/Phone has been filled with 15min to 2hr blocks of sound. I hardly ever listen to discrete tracks anymore, at least recreationally, as I much prefer going on a little ride provided by some careful curator. The two hallmarks of Chris Lemon-Red’s series were A) his fine choice of DJs — and I don’t mean this to be self-aggrandizing (I’m humbled to join the ranks) — and B) the relatively reasonable lengths of the mixes: at least for the first several, they tended to clock in at around a half-hour, perfect for a quick, music-addled jog around Fresh Pond. Of course, being a six person team, we couldn’t really deliver on brevity, but we were certainly inspired by the funky, chunky mixes turned in by the likes of /Rupture, Poirier, the Rub dudes, Cap & Jones, Emynd & Bo Bliz, etc. Fine company, fi true.

Second, it was a blast to collaborate with five of my favorite DJs in the world — and to attempt to stitch together a coherent mix out of a half-dozen different visions. Given our asynchronous exchange (combined with a few realtime building sessions), I think it holds together pretty well. (And Jake, aka DJ C*, deserves some credit for doing the work of pasting things together and smoothing over the edges.) I ended up with the slightly dubious honor of closing out the mix. Dubious only because it takes almost an hour to get to my wee 6 minute section. But it was definitely fun to cook up a climax! For that reason, way back when and again today, I’m also offering up a standalone mini-mix of my contribution:

(You can read more about the mashing up of Lil Jon, Del Shannon, and some bubbling loops here.)

* FYI — DJ C will be returning to Beat Research, the night that he founded some six years ago, this coming Monday, July 26, to rock alongside Flack (and me) just like old times. Come help welcome him home for the evening!