As I mentioned in the last post, I’m headed to London this week (tomorrow today actually!) to participate in a Caribbean music seminar at Royal Holloway College. I’m honored to have been invited to join in the proceedings, and I’m quite looking forward to the various papers, the broader conversation, and the feedback I hope to receive on some ideas I’ve been tossing around for a while (and from a group of sharp, Caribbean/ist interlocutors at that).

I’m calling my talk, “To Turn the Text Upside-Down: Versioning the Foreign in Jamaica,” but I should perhaps say “Upside-Up,” or “Rightside Up,” or “I-side-Up,” or something similarly more Rastafarian in spirit (the “upside-down” was spoken by Stuart Hall, incidentally), and I might as well add “Versioning Jamaica in the Foreign” — for how better to describe my own reggaecentric projects?

But here’s Hall elaborating on the idea of turning the Bible upside-down:

…Rastafarianism represented itself as a ‘return’. But what it ‘returned’ us to was ourselves. In doing so, it produced ‘Africa again’ — in the diaspora. Rastafarianism drew on many ‘lost sources’ from the past. But its relevance was grounded in the extraordinarily contemporary practice of reading the Bible through its subversive tradition, through its unorthodoxies, its apocrypha: by reading against the grain, upside-down, turning the text against itself. The ‘Babylon’ of which it spoke, where its people were still ‘suffering’, was not in Egypt but in Kingston — and later, as the name was syntagmatically extended to include the Metropolitan Police (…) Rastafarianism played a critical role in the modern movement that further translation, this strange doctrine and discourse ‘saved’ the young black souls of second-generation Caribbean migrants in British cities in the 1960s and 1970s, (…) it decolonized minds. [link]

Whether or not “upside-down” is the word, I find this a compelling reading of much Jamaican culture, which reinforces my sense that what Deborah Thomas calls “modern blackness” is a useful lens for making sense of (i.e., for versioning, yes) reggae’s relationship to, say, hip-hop. After discussing various texts that get turned upside-down inna JA (and the J’can diaspora) — the Bible, English, colonization, Westerns, r&b — I’ll turn in greater detail to the specific case of hip-hop and the (potentially) bexing questions it raises about who’s turning whom upside-down (and who cares). Or as Alexander Weheliye puts it, in reference to a broader context —

As a direct outcome of its growing sonic and visual presence hip-hop has come to define what it means to be black and “modern” within a global context and particularly in youth cultures. Because of hip-hop’s preeminence, Afro-diasporic youth populations habitually identify with or define themselves against hip-hop culture, creating identities suspended between the local and the global. (146)

With this sort of tension in the air, my main frame of reference will be, as it has been, directed toward and informed by a group which could fairly well be described by the passage above: the hip-hop generation of Jamaica — those who grew up on MTV and BET and Biggie and Tupac as much as with Stone Love and Irie and Beenie and Bounty; those for whom “playa-hatin” rolls off the tongue as easily as “badmind”; those for whom rap beats and flows offer a special kind of currency; and yet, those for whom adopting a Yankee style wholesale still seems anathema, unthinkable, or certainly conspicuous.

Few DJs of this generation would go so far as to say that a Jamaican who rapped was not “keeping it real,” so to speak. As another Kingston-based DJ, Raw-Raw, put it: “If someone lives in Jamaica and him wan’ rap like him born in Brooklyn, I have no comment on that beca’ — whatever you feel [is valid].” In other words, Raw-Raw would not want to tell a performer what is in or out of bounds regarding their mode of expression. […] Other Kingston-based artists assented that such a stylistic strategy implies a serious trade-off but is a testament to hip-hop’s power. A singjay named Dami D equated the decision of a young Jamaican to write a rap song with “put[ting] away all pride.” At the same time, he attributed the phenomenon of Jamaican rappers to hip-hop’s ability to inspire people, or in his words: “That show, seh, that hip-hop, it dedeh for really uplift the youth dem.”

One thing that helps young Jamaicans to reconcile an embrace of hip-hop alongside (dancehall) reggae is an understanding of the intertwined genealogy of the two. When I asked him about the relationship between hip-hop and reggae, Wasp, a Kingston-based DJ and one of my primary collaborators, told me:

Rap, ‘pon a level now, come from reggae, seen? Dancehall now is a new ting weh come after rap, seen? So hip-hop get influence from reggae, but this what we a do now — what Dami D a do, Beenie Man a do, Bounty a do, y’know — a dancehall, and that come from rap.

Indeed, in our collaborations, Wasp frequently pushed me (or allowed me to lean, as I was wont to do) toward hip-hop. As I recounted it several years ago, revealing with the awk phrase “anti-jamaican” more about my own underlying assumptions than his —

just yesterday, as i built a riddim for a dj named wasp, i was struck by his anti-jamaican directions. he wanted the snares squarely on the 2 and 4 and the kicks avoiding any semblance of a 3+3+2. he didn’t want a dancehall sound. he wanted an “international sound.”

And yet, this was also the same guy who told me,

I just be a man weh stick to my culture, still. Our culture is like, reggae, dancehall, seen? From your yard, man, is either you have a choice between reggae and dancehall, you see me a say? […] If a man live a yard and him a rap is like, me feel like him fi just go seh, bomb, and just know seh, yo, him fi go live in other heights, y’know? 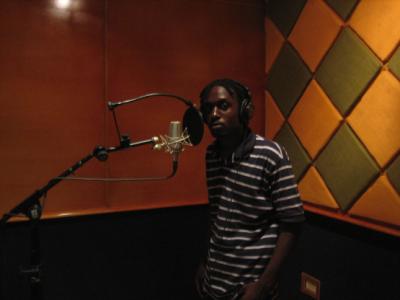 Wasp in the studio

I don’t talk to Wasp as often as I’d like to, though I do get regular updates from my man Dami D, who told me recently that Wasp was blowing up (“Wass buss,” he said in that wonderfully economical JA way) and that he had a myspace page and all that (and, as it turns out, about 3 times more friends than i&i !). When I visited, I was quite stoked to hear Wasp absolutely killing the new Black Chiney joint, i.e., the Drumline riddim —

Not only has Wasp apparently scored himself a spot on the roster for the Drumline comp with his hissed whispered wordspill — man a buss di place, no doubt — apparently he’s doing dubs, too, so if you’re looking for a tight vocal, check the man.

I’m told that soon enough he’ll have a hot new mixtape out — Kingston kids know how to get the word out, knamean you see me? I first noted the embrace of the hip-hop style mixtape format (i.e., recording your own songs over hot beats, interlinked w/ skits, etc.) in Jamaica when I was there a couple years ago and was passed a tape representing Cassia Park to the world, over the hottest new dancehall riddims and hip-hop beats alike. One track featured Wasp rocking over the beat from the Game’s “Dreams,” introduced with a sample from a classic Twins of Twins bit —
[audio:http://wayneandwax.com/cassia-park-mix1.mp3]
note the long pull-up around a minute in

As I wrote at the time —

it’s clear that the hip-hop format for bus(t)ing new artists and new tracks has been fully embraced by the digital-denizens of kingston. paralleling young jamaican video artists’ use of found footage (the war in iraq being a particularly popular source of images to counterpose with the ghetto) and video game graphics, among other things, young mixtape makers are increasingly incorporating not simply the classic sounds of jamaican soundsystems (e.g., screaming selectors, big-ups from bigman-DJs, gunshots, and low-fi mixer effects) but everything from silly fruityloops sounds to the latest hip-hop beats to sizzla’s signature “HAAA!” or killa’s “CROSS…” to — the clear new favorite — clips from the twins of twins’ highly popular dancehall parodies.

— they just gotta get them jawns over to MixUnit or something.

Another recent recording by Wasp, which will likely land on the forthcoming mixtape as well, features fellow hip-hop gen DJ, Terro 3000, and offers yet another take on today’s hip-hop inflected Jamaican sound —

Wasp, ft. Terro, “Buss It Off”
[audio:Wasp-Buss_It_Off_WUmix.mp3]
if you listen to the end you’ll hear a lil unintended irony — this being a myspace rip — as an uninvited pop-up voice from the Western Union website comes into the mix; seemed appropriate, so i left it in

At this point, tho, I’ve got to catch some z’s so’s I can catch an early flight across the pond tomorrow. So me haffi jus leave it right here for now. If you’d like to read more along these lines, check the dissertation excerpt I have up on the “word” page. More soon come on that front, too. //