I reviewed Salvadora Robot, the latest album from Colombia’s Meridian Brothers, for Issue 364 of The Wire (June 2014). 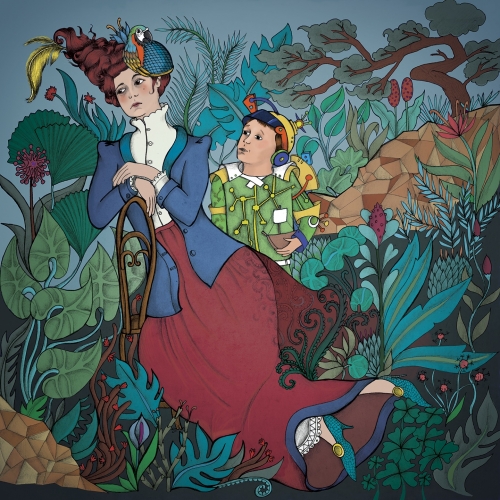 Cutting their own odd swath though a tangle of urban musicians now embracing their country’s regional, grassroots popular traditions, Meridian Brothers’ newest offering is a genre-hopping, funhouse reflection of the Colombian music landscape. On Salvadora Robot, the Bogota based musicians set their nimble jazz hands to wringing fun, funny songs out of charged local materials, cosmopolitan flourishes, and a battery of resonant, vintage sounds. Inflecting local idioms like vallenato and salsa with gestures and arrangements more redolent of Tom Zé or Tortoise than Joe Arroyo, the group scrawls its skittery signature all over the map.

While the warbling electric guitars sometimes tug at the surf-rock roots of Andean cumbia – “El Gran Pájaro De Los Andes” is audibly steeped in Peruvian chicha – the combination of tropical and psychedelic takes many shapes on the album, including the psych-rock salsa of “Doctor Trompeta”. Surprising, delightful synth lines dart in and out of several songs, and a panoply of intricate riffs and rhythms, especially the interplay between the drums and keyboards, conjure all manner of classic Colombian band traditions – and perhaps other allusions as well: “Somos Las Residentas”, the frisky album opener, recalls Raymond Scott with its slinky horn-riffs and locomotive drive. Throwback keyboards and guitars often jump out of the texture, but the lively kit drumming is the album’s combustible engine.

Salvadora Robot is expansive and inclusive in its references, and finds Meridian Brothers attentive to the bounds of tradition but willing to take risks. Several songs end in maniacal laughing, entranced singing, or animal braying, and the album’s lyrics are colorful, uproarious, and often surreal, with “burning butterflies”, “pregnant dolls in the trash”, and a tale of a man sentenced to the electric chair for dancing to reggaeton. That song, “Baile Último”, despite its conceptual bite, offers a rare moment when the group seems to stray from the prevailing spirit of the project. Salvadora Robot carries a studious attention to local wellsprings without slavish devotion to convention, but when the tribute turns tongue-in-cheek, it undercuts the song’s critique, which is leveled not at reggaeton, but its elitist critics. The group’s lurching, out-of-sync take on reggaeton, more for the bourgeois than the boulevard, falls flat. But for the most part Salvadora Robot is a thoughtful and fruitful engagement with, and resistance to, the twin trappings of nostalgia and novelty.