Last week there was a message posted to the dancecult list, which, in the process of recommending a couple of Nate Harrison’s fine videos, asserted, not uncommonly, that the Amen break was “the most sampled rhythm ever, the very foundation of most rap, techno and jungle.” 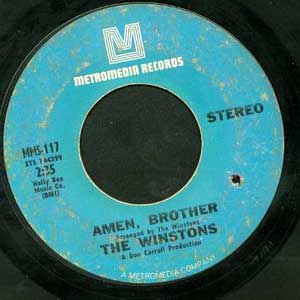 Now, undoubtedly the Amen break is one of the most heavily sampled recordings since the advent of digital sampling, but I wouldn’t know how to begin assessing, quantitatively, whether it is indeed the “most sampled” break of all. (Let’s put questions of “foundation” aside for now, never mind what it means to sample a “rhythm.”) I’d like to take the opportunity, then, to raise some methodological questions, not to mention musical-ethical-technological questions, about the class of samples that have far outstripped their breakbeat brethren in terms of frequency and prominence. Such “breaks” — tho they’re not always breaks in songs, per se; some are full or partial instrumentals — essentially become basic building blocks, linked less to their initial recordings (for listeners and producers) than to the dozens or hundreds of other tracks that have also sampled them, hence accruing a kind of associational-emotional resonance deeply entwined with notions of genre and style.

Though he discusses its ubiquity (and submits that it has now passed into what he calls the “collective audio unconscious”), Nate Harrison never makes as bold an assertion in his video. Which is not surprising. The actual numbers are awfully hard to get at, quite elusive in their vast undocumentedness (and perhaps undocumentability, as I’ll discuss below). In the pantheon of well-worn breaks, the Amen certainly scores high — probably top three (as an “off the top” estimate), but who can say conclusively? I make my own estimate based on years and years of listening to hip-hop, jungle, and various other sample-based (and break-centric) genres — and, natch, absorbing other people’s opinions on the subject. But this remains, ultimately, an intuitive sense of things.

Getting at the stats isn’t any easier, and pursuing them is itself often an ambivalent activity. There is the-breaks.com of course, which, however, tends only to list hip-hop tracks that employ samples (and, in the case of the Amen, only 32 out of what is surely a far greater number). As a hobbyhorse and a relatively small-scale, user-supported endeavor (without the critical mass of a project such as Wikipedia), the-breaks is doomed to incompleteness, and certainly slowness. And with a break like the Amen, which has likely supported far more jungle/d’n’b tracks than hip-hop beats, a site like the breaks is likely to be a poor barometer for overall trends (esp given the proliferation of sample-based tools and styles).

Far as I know, the-breaks has few analogs in the worlds of jungle, drum’n’bass, techno, house, etc. (Though if anybody knows of some useful ones, let me know. I’m sure there are some ambitious, if more informal efforts on various sites and message-boards out there.) The reggae databases seem to outstrip all other genres in their robustness of data and searchability. And there’s the ever-impressive and useful discogs, though there doesn’t appear to be a strong effort to document samples there. (Which would require a different level of archiving than is customary in discographies, but which would bring in some increasingly important metadata.)

But even if taken in such a direction, a site like discogs might be ultimately too limited in purview, restricted as it is to more-or-less ‘official’ releases. I suspect that all of the sites mentioned would fail to take into account not only ‘amateur’ recordings and the vast and vaster world of CD-Rs and mp3s, but dubplates and rly-indie releases too. (In the age of self-publishing and purely digital distribution, what constitutes an ‘official’ release?) Much more music is made than ever can be heard — never mind archived and annotated! Perhaps with a committed enough (and diverse and big enough) community, the collective headz could make strides toward something to give a more confident sense of which samples reign supreme, though we might better spend our time asking why we care in the first place. And yet, even with the participation of producers, collectors, scholars, and enthusiasts of all stripes, such a database would still surely still overlook some of the more subtle or undocumented or ephemeral or secret uses of samples. (One could argue, tho, about statistical significance here, I suppose.)

We can hope and pray for the Superwiki of Musical Metadata®, but even this idealized project runs into significant snags, esp in the realm of ethics. In the current litigious climate where sampling artists are being sued retroactively by the boatload, and court cases are not going their way, the very activity of assembling this sort of knowledge is fraught. Aside from sample-sniffing scum and other sellout species, who wants to be complicit with such reprehensible entities as Bridgeport Music, a large “publishing house” with strong holdings acquisitions in well-sampled catalogs, which has initiated over 800 suits in the last 5 years? (Jay-Z being the latest target.)

Practical and ethical issues aside, let’s return to the main question for the sake of speculation: is the Amen the “most sampled” “break”? As I mentioned above, my intuitive sense is that the Amen break has indeed been employed a staggering number of times — quite disproportionate in relation to most of its breakbeat kin. Even so, I can’t confidently say whether it is or is not the “most sampled” break. And part of my hesitancy here is that I’m aware that there are several other recordings, similarly seminal we might say (blame the patriarchy), which I suspect might vie with the Amen at the top of the heap.

Although I think it’s a stretch to say that the Amen was “foundational” for any genre (e.g., jungle was both emergent and breaky before it adopted the Amen as drumkit, while the Apache, et al., have rolled alongside it all the while), I’d agree that it’s quite difficult to imagine jungle and d’n’b without it.

But as S/FJ said the other day w/r/t Battery Brain, the Amen is but one of several recordings that might claim the distinction of having served as, in Sasha’s words, “the basis for an entire genre.” (And, btw, that Dave Thompkins bass romp he links to is well worth your time, as will be, I’m sure, dude’s forthcoming book on the vocoder, which promises to be on some nextlev, as usual.)

This basis-of-a-genre crew is a constellation of breaks/riddims/recordings that I’ve been giving some thought to for a while now, as I find it a rather fascinating and potentially deeply significant phenomenon (which points us again to the question of why we care, about which, more below). I’m keen to know if I’ve missed any obvious or not so obvious examples, but here’s a short list of some such “formative” breaks (to my ears):

I realize I’ve gone on at some length here without really addressing the crucial question of whether (and why) it matters that one break might have been sampled more than others. That’s too big a can of worms to open at this point, so allow me to close by offering some possible areas of inquiry with the contention that it’s not only important to think about such issues alongside the more straightforward ones about assembling and making sense of data, it’s far more important. Qualitative studies can no doubt be informed and supported by accurate, robust, analyzable data (yo Pace, where you at?), but quantitative methods don’t get us very close, I don’t think, to such issues as, if I may submit a few: pliability of forms, creativity against constraints, public domain activism, supremacy of analog technologies (and/or digital !), the idiosyncratic sound of the band (esp the drums), the inspired performance of the Winston’s drummer, Gregory Coleman (whose recent passing seems conspicuously unregistered among the denizens of the breaks), the resonance of well-worn, remixed recordings in the age of digital reproduction, the aesthetic implications and cultural politics of such practice, and on and on and on and.

These are but a few possibilities. And this whole post is just a big thinkpiece (this whole blog, really). So feel free to add to the list, revise it, question my foundational assumptions, or chop the whole thing up and reassemble at 165 bpm. (Wobbly bassline optional.)

ps — Having just finished composing this, a search led me to a somewhat similar discussion (ca. ’93) over at blissblog (undoubtedly, this conversation has been repeated in many corners), including the following SF/J testimonial:

Most hip-hop heads, like me, were unimpressed with jungle for a while PRECISELY because we knew that sample. It turned out that holding “Amen” constant for all artists — almost like a rule in sports — and then requiring them to crack it open and chase a diminishing horizon of returns was the BEAUTY of jungle. But dumb headz just thought “We know that one — come on, dig deeper.”

11 thoughts on “Are These the Breaks?”