Lamin Fofana, who recently released an excellent EP, has collaborated with Erik Marika-Rich on a video for one of the tracks, “Happy 2010 // Dark Days Are Coming.” It’s a dramatic and harrowing interpretation of Lamin’s suggestive abstractions. Bloops and bleeps offering blank spaces to be filled —

Which makes this as good a time as any to announce that Lamin is coming to Beat Research this coming Monday, Nov 15, for what I believe is his Boston debut! Do come by and hear what he strings together for us. His mixes have not failed to twist and tweak expectations, at least for this listener. Deets —

Also apropos: Lamin’s peoples, Dutty Artz, have finally released their New York Tropical compilation. DA is one of the few posses I’ll give a pass for using so hackneyed and vague a term as tropical — for years a bland music-industrial category (dare I say ghetto?) for certain Caribbean/Afrodiasporic genres — not least of which because their notion of what it evokes seems like such an idiosyncratic, inspired articulation of the city’s sounds and spaces, contours and forms, not to mention the shapes it might yet take on. 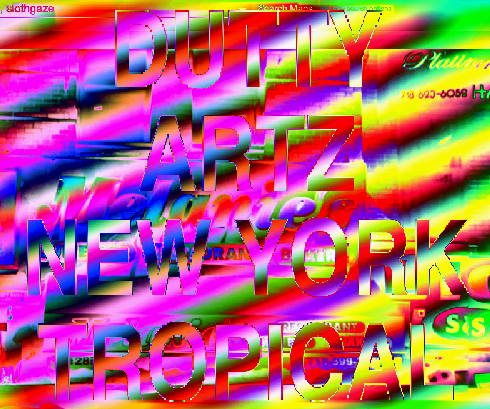 Finally, allow me to put in a plug for the Dutty Zine‘s open call for submissions. The theme for this one is “piracy” & the idea is as follows:

…there’s this thing called the Internet but here at Dutty Artz we are mostly focused on bodies. Preferably sweaty ones. What moves them, what brings them together or forces them apart, trying to create spaces where we can melt our boundaries or learn useful ways of navigating each other and The World Around Us, which is part Mr + Mrs Internet but part walls and metal and dirt and apartments and streets and jet fuel and mostly plastic products which is why we’re doing a ZINE. To spread this talk into a physical format, the kind of thing you can leave behind or fold up and take with you, because everything circulates differently offline — call it distributional aesthetics — and nowadays it’s not knowledge so much as vectors of connection, context, and collapse, plus or minus corporate sponsorship and/or access to potable water. Submit at zine@duttyartz.com

Speaking of, I’ve got another plug for a publication looking for strengthy submissions. Stay tuned…