I don’t have as much to say about reggaeton in Mexico City as I do about hip-hop and graffiti, though it has often been an elefante in the room. Also, you don’t have to understand much Spanish to read this sort of writing on the wall —

There are other kinds of reggaetony writing on the walls too, however, and so reggaeton’s status in DF seems to me, at best, ambiguous. For instance, though I didn’t get any shots of them, when I was in DF in November 2009 I saw several brightly-colored, professionally-rendered, wall-sized paintings advertising upcoming shows from Wisin y Yandel and Ivy Queen.

And while visiting the city last month for Postopolis, I did happen to get a snap of this:

This curiosity — which I’m guessing must be a few years old now — announces a concert from Don Chezina, billed here as hailing “from the island of the gangsters”! (Way to go, Puerto Rico!) Interestingly, the poster itself declines using the term reggaeton. I’m not sure how deliberate that evasion was, but it’s interesting that instead Chezina is referred to as “el maestro del perreo boricua.” As I’ve discussed before, reggaeton sometimes seems to travel easier as a dance form — as perreo — than as a musical style.

Given the ongoing popularity of Latin Caribbean dance music in Mexico, this may not be too surprising. I’ve bought cumbia villera and reggaeton romántico CDs from the same vendor. As Deborah Pacini Hernandez details, this embrace is central to cumbia’s story of transmission and transformation. And I witnessed this affinity registered on other posters in the same neighborhood —

Still, from what I can tell, save for pockets of popularity (about those in a moment), reggaeton is pretty much genre-non-grata for participants (and gatekeepers) in DF’s hip-hop scene. Mirroring Tego Calderon’s story in PR, Big Metra, once among the DF’s most revered and popular MCs, was shunned by many of his peers after embracing that ol’ dembow and aiming at pop crossover. (Despite collaborating with the likes of Jadakiss and Twista.) Consider, then, the following account of opposition to reggaeton within Puerto Rico’s hip-hop scene, which, as Marlon Bishop relates —

split ways with the reggaeton scene in the mid-90s and went down a more conscious, political path.

I spoke with rapper-scholar Welmo Romero about this difference. Welmo grew up in Puerto Rico of Haitian and Dominican parents, and was on break from studying to defend his master’s thesis when we got together.

“One of the most important things about hip-hop to me, it’s way of being ‘in your face,’ of using poetry to talk about a very crude reality,” said Welmo. “So until reggaeton went mainstream, it maintained this spirit of defiance, of questioning inequality, poverty, the lack of resources…

“Reggaeton, I think, is a genre that had its moment. Once the major labels came in, it began to lose that defiance, and the image and music of the rapper was softened, and even the environments in the music videos changed. The ghetto disappeared and became the mansion, the cars, and the bling bling.”

Then watch this Big Metra video:

An antipathy to reggaeton came through loud and clear in the conversations I staged at El Eco with some of DF’s important hip-hop purveyors. During his talk, in an aside akin to spitting on the ground, Tomás Álzarez Brum called reggaeton “mierda” — a common charge, especially among a certain set of “underground” torchbearers. My other guest, 2phase, agreed in so many words, though I confess that I can’t recall the particular phrasing. (Any recollection, Camilo?)

It’s the sort of objection that keeps rearing its head in places like this 15 second YouTube video I posted a few years back. It’s actually rather surprising — or, I suppose, revealing — how often the mierda (i.e., shit) is applied to reggaeton (see also, basura / trash). It’s a form of diss implicating matters of taste and value. As I’ll explain, however, it’s not so easy to say that reggaeton is rejected either because it is seen as “low” or, alternately, as some sort of foreign import for the local jetset. Ironically, reggaeton in DF is (dismissed as) both of these things. Naco y fresa.

At one end, we find reggaeton used as a stylish signal of metropolitan fashion, a globally-circulating symbol of cosmopolatino cool, the sort of thing you’re careful to put on your flyers and email-blasts if you’re, say, promoting “LUXURY HIP HOP” at a super-swank club in one of the schmancier parts of town (h/t Daniel H) —

Given the way that reggaeton figures into fresa fantasies, you can understand why some might revile it. But interestingly, the disgust and dismissal of the genre also feeds into animosity toward the poor kids (literally) who make up reggaeton’s other main constituency in Mexico City. Camilo Smith has an excellent post on the intense anti-reggaeton sentiments he encountered when pursuing more information about the so-called “cult” of San Judas (a phenomenon recently profiled in the NYT). Here’s Camilo’s take —

The anti-reggaeton sentiment, I think, is more classist than anything. The reggaetoneros are viewed as thugs and neardowells, when in fact, most are just young kids among the desperate and needy whom San Judas is supposed to protect. Albeit with airbrushed and rhinestone caps.

One Facebook fan site, is filled with pictures tagged with racist and mean captions and comments. Odiamos a todos los reggaetoneros ke van a la iglesia de San Judas los 28′s (We hate the reggaeton fans who go to the San Judas church on the 28ths) has over 4,000 fans.

You can see a few of its mocking portraits below, and after the jump. There tends to be special distaste for reggaeton’s doggy dance or perreo that the kids do.

Go over to Camilo’s blog to read the whole post and see the pics (he really dug up some digital gems), but I can’t resist sharing this mashup of San Judas and Yandel — 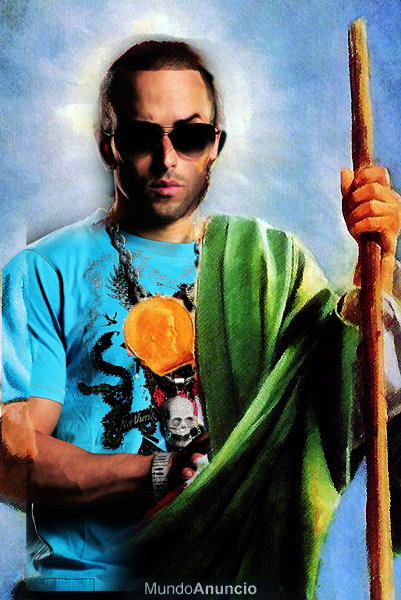 And since I stay steady scratching the surface of what reggaeton means in Mexico City — how it figures in DF’s noisy, charged soundscape — I’ll have to come to a close with a few telling jokes culled from Camilo’s web wanderings. I’m not sure about the particular provenance of these (i.e., was the author posting them writing from DF?). But the way they simply cut-n-paste several classist cliches suggests that reggaeton, despite its uptake in places like Polanco, remains strongly anchored to images of poverty, crime, and lack of education:

Que le dices a un reggaetonero con trabajo? / Me puedes dar mas papas fritas?
(What do you say to a reggaetonero with a job? / Can you give me more fries?)

Bringing it back home, this page, which includes the jokes above, even offers a list of places “where you can encounter a reggaetonero” in Mexico City:

Given such an evocative map, I clearly need to return to DF once more and see what I can hear while riding a minibus or getting robbed on the street.