Readers of this blog should know my love for Mexico City by now, so it’s with great pleasure that I announce my participation in Postopolis DF! A 5-day conference-conversation on urbanism in one of the world’s most amazing cities… In other words, if you were thinking of coming to DF this summer, now’s a great time… And don’t worry gringos, vamos a tener realtime Spanish-English translation for y’all. It’s going down the second week of June, June 8-12, at El Eco…

Oh wait, I didn’t write that (though I share the sentiment). DJ Rupture did. Which is yet another reason that I’m totally thrilled to be a part of

I didn’t write this either:

From 8-12 June 2010, Storefront for Art and Architecture, in partnership with Museo
Experimental El Eco, Tomo and Domus Magazine, will host the third edition of Postopolis!, a
public five-day session of near-continuous conversation curated by some of the world?s most
prominent bloggers from the fields of architecture, art, urbanism, landscape, music and design.
10 world-renowned bloggers from Los Angeles, New York, Turin, Barcelona, London and
elsewhere will convene in one location in Mexico City to host a series of discussions, interviews,
slideshows, presentations, films and panels fusing the informal and interdisciplinary approach of
the architecture blogosphere with rare face-to-face interaction.

Each day, the 10 participating bloggers will meet in the magnificent courtyard of Museo
Experimental El Eco, designed by Matthias Goeritz, to conduct back-to-back interviews of some
of Mexico City?s most influential thinkers and practitioners – including architects, city planners,
artists and urban theorists but also military historians, filmmakers, photographers, activists and
musicians. The talks will be conducted in either Spanish or English, and translations will be
available. Each day of talks will end with an after-party hosted by some of Mexico City?s most
influential music blogs.

But I’ll be writing a lot while there, no doubt. (They’re turbo-charging the internettings at El Eco for the occasion.) And I’m really excited about how my slate of invites is coming along.

Not surprising to readers here, I’ll be staging a conversation (or two) around hip-hop in DF. Minding that the conference is concerned, in a rather capacious way, with questions of space and design, I’m aiming to focus on what we might consider hip-hop’s institutional embeddedness in Mexico City. Mil gracias to my man on the ground, Camilo Smith, a former writer for the Source and the LA Times (and smokingsection!), who’s been grinding in DF for the past year, looking hard into the local hip-hop scene(s). Check out this post on transnational “cholo rap” for a taste (or see the comments here).

With Camilo’s help, I’m plotting to bring in an assortment of MCs, DJs, and other practitioners as well as people who are directly involved in manufacturing, distributing, and, in a variety of ways, producing hip-hop there (in the form of shows, CDs, magazines, etc.). I’d like to ask questions about what it entails to run an independent label in DF, how the spaces where shows are held and music is exchanged fit into the larger music/media topography of the city, what’s the character of the interplay between locally and foreign produced stuff, not to mention, at the more symbolic level, how questions of race and place come into this. We’ll see how much of that we can jam in / tease out over a couple 15 minute blocks!

Camilo also turned me on to some striking visual artists working in the city and making stuff that really resonates with other longstanding curiosities of mine. One such, who I’m thrilled to announce is confirmed for Postopolis, is Said Dokins, whose work is very much in the vein of contemporary subversive street art which finds deep inspiration in graffiti style and practice. Take for example the recent piece, “Avionazo en la Plazuela,” a project pasting paper planes in the Plaza del Aguilita in Mexico City which the artist describes as “a satirical reflection on the mechanisms of threat and power in which we are engaged, the political farces and scenarios created at the expense of the suffering and disruption of others”: 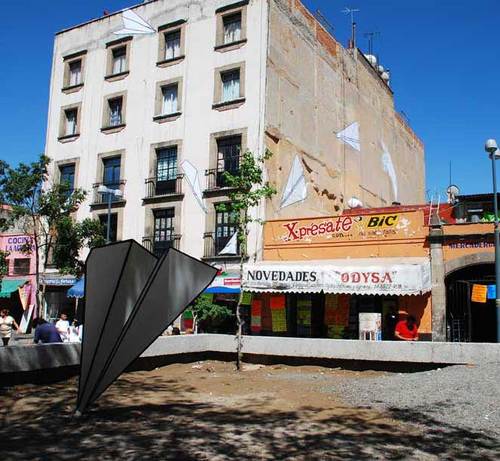 Another artist who Camilo pointed me to, and who I’ve confirmed for Postopolis, Trinidadian ex-pat Wendell McShine, also works in mixed media, including video, like this evocative short:

The video above is apparently a sketch of some sort for an ongoing series called “La Puerta Abierta.” It’s clearly inspired by a lot of classic Mexican iconography, and yet it takes some wonderful departures too, drawing on some shared cosmological ground between Mexico and the Caribbean. McShine recently had a showing of another part of the series, “Behind the Blue Door,” at Gallery FIFTY24MX | Upper Playground in Mexico City. The following video account of the opening drew me in with the Slum Village intro; the evidently enthusiastic response his art is getting in Mexico City is impressive —

OPENING NIGHT- BEHIND THE BLUE DOOR from wendell mc shine on Vimeo.

This article about McShine’s work led me to an interview with the folks who run Upper Playground Mexico. Some of their comments at the end of that interview, where McShine’s art is described as combining “animation, illustration and fine art with a mixed Caribbean-Mexican feeling” made me really wonder about how we can talk (concretely?) about making contemporary art inspired by national folklore (whether it’s one’s “own” nation or not) without, as the Upper Playground people put it with regard to another artist, “falling to cliché.”

But let me back up a bit, the artist in question is Saner (glossed as a “graffiti artist” in the video above) and what they specifically say about him is that he’s “one of the few Mexican artists that explore our countries [sic] folklore without falling to cliché.” I couldn’t resist looking into Saner’s work of course, and it’s hot like fire (sometimes literally). 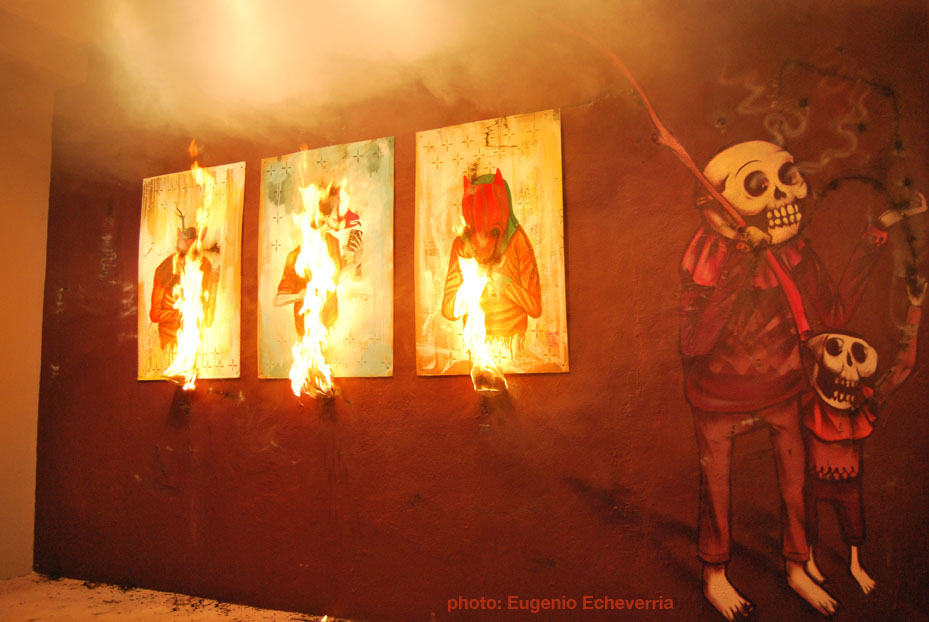 So I’m psyched to round out my invited speakers with the trio of Wendell McShine, Saner, and Lili Carpinteyro, one of the head honchos at Upper Playground Mexico. I haven’t quite figured out, as with the hip-hop invites, how best to parse all of these fascinating intersections, but I’m looking forward to the challenge — and to the privilege of enjoying such (humbling) power of invitation!

Finally, it should go without saying that I can hardly contain myself in anticipation of the other 50 or so fascinating folks who’ll be coming through and sharing some aspect of what they do. Click through my esteemed blogger colleagues’ sites for their own announcements in the coming days and weeks —

Oh and did I mention there’ll be evening events organized by local music bloggers, Blog Non Stop, and that I’ll be playing some 3-5 parties alongside DJ /Rupture and N-RON? (More on those later.)

Suffice to say, if you’re in Mexico City, or have some way to get there, you should definitely join us for this. Seems like it might even rise to the level of amazingness that makes DF one of my favorite places in the world. This’ll be my third time there in three years. ¡Que suerte!

Ok, back to that odd mezcla of rusty Spanish brain and Google Translate as we continue making plans…