Joining the ranks of many great blogs and other innocents caught in the crosshairs of copyright fuckery, I received my very own Blogger DMCA takedown notification today!

I learned this evening via email from Blogger that the following post, originally published to my wayneandwax blogspot blog back in June 06 (defunct since October of that year, when I moved ops over here), was “reset” to “draft” status because someone is claiming that something therein infringes on their copyright. Far be it from them to tell me what might possibly be getting in the way of an otherwise fairly unremarkable post about how my electronic music class had panned out, if of sentimental and, perhaps for some, curious value.

My best guess is that some track or other in one of the two mixes (made by a student) that I link to in the end (and for which, my likely achilles heel, I also provide tracklists) set off someone’s auto-trigger-whatever. Ironically, I never hosted any of that material directly, and the links to the mixes originally embedded have long gone dead.

I’m reposting the supposedly infringing post in its entirety here because I’ll be damned if I’m gonna let Blogger delete it and because I’d like to see a copy of this notification myself — and be persuaded that I’m doing anything that really makes me liable for damages — before censoring this thing that I wrote many years ago that is no way in hell infringing on anything. (Bonus: we get to revisit Keith Fullerton Whitman’s awesome tour of Harvard’s analog synths!) But I’m also reposting to solicit ideas about what might have been the infringing content in question. Any ideas? Get at me, copyright holders.

(btw, yes, I saved a full backup of the blogspot years ago)

it’s now been about a month since the electro class wound up. an ambitious, breakneck survey of the wide world of “electronic music” (broadly defined), it was a delight to teach once again, especially with students joining from as far as edinburgh and omaha. i won’t be offering this particular course again, but the endeavor – and two years experience working through the materials – has deeply informed my perspective on “electronic music” and i look forward to digging into various areas, themes, and histories in new ways in other courses in future years.

i suppose the biggest thing i’ll take from the experience is similar to what i hope most students come away with: an enriched sense of how these various genres and styles relate to each other, sonically and socio-culturally, and how we can hear histories of social movements and cultural politics in contemporary sonic structures (especially in the way they draw musical genealogies – often in a rather audible, immediate manner).

considering that we began with stockhausen and the beatles and proceeded to trace “experimental” and “popular” movements (and their interplay) in “electronic” music from the 50s to today, it seemed appropriate to end with a twin tutorial on oldschool analog synthesis and newschool max/msp from local versatile virtuoso, keith fullerton whitman (who, i should note, performs with matmos on the latest podcast from the dublab).

keith gave an excellent introduction to both systems of synthesis, including showing us his max setups for both kfw and hrvatski mode – the latter requiring that one could operate it well drunk, which is, to paraphrase keith, how breakcore is supposed to be played.

that there (decent but terse) wikipedia article on breakcore – see also, e.g., kid kameleon’s xlr8r article – provides as good an opportunity as any to discuss the final project for the course, which required each student to create or make a substantial edit (or series of edits) to a wikipedia entry on some aspect of “electronic music” – defined as broadly as the course defined it (which is to say, broadly).

the guiding idea was to attempt to enrich as we engaged with public discourse on electronic music and to marshal our collective efforts toward something that might go further than term-papers that might not receive a second glance or final exams that definitely wouldn’t receive a second glance. (not to mention to teach students how an increasingly ubiquitous research-tool – that is, wikipedia – actually works, and thus to discourage, among other things, the practice of citing it as an “authority,” rather than as a particular expression of, or “consensus” around, an idea – which is, of course, how one should approach any text.)

my main concerns were: 1) that a wikipedia entry (or even series of entries/edits) might not quite be substantial enough for a final project; and 2) that the “neutral” POV standard of wikipedia might make it difficult for students to engage at the critical level that i would like them to, dealing not just with description and synthesis of information in their posts but also looking at how their subjects are enmeshed in certain discourses, etc., and to explore somewhat self-reflexively how their endeavors fit into the larger public conversation about electronic music. for concern #1, we adopted a slightly fuzzy “substance” standard – judged relatively across the class – to be sure that people were doing an adequate amount of independent research and original work. (it turned out to be rather helpful that one can track another wikipedian’s contributions quite precisely.) for concern #2, we enforced an explicit policy of discussing the endeavor itself on our class blog and on the appropriate “talk” pages at wikipedia.

finally, i’ll to point people to a couple mixes that our edinburgh-based classmate put together. the first is an orientalist-tinged dubstep mix, the second a romp across various african popular genres. descriptions and tracklists follow..

“dubstep mix i did in ableton – LOTS of ‘eastern’ influence/appropriation present here!”

“a mix of african tracks (from all over africa) for my dad’s birthday – the end kind of lets it down but it’s still very listenable ;) starts off with 20 minutes of soukous/ndombola etc style stuff then a bit more of a mixture” 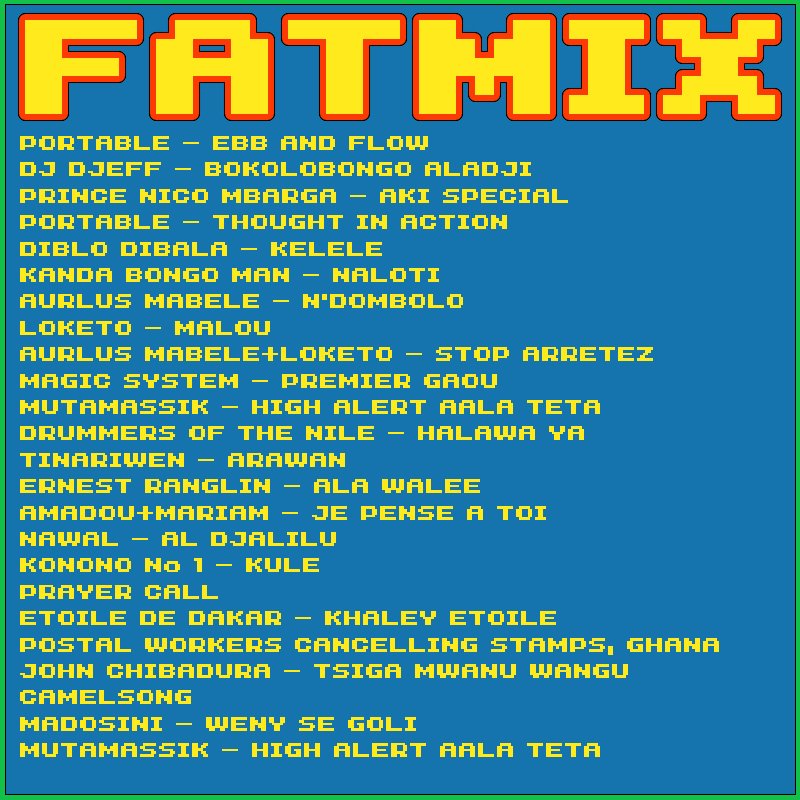 10 thoughts on “My Very Own Blogger DMCA Takedown Notification”