[Here’s another Riddim Method re-post, featuring a couple mashups which I made all by myself (with the help of Kazaa and Ableton). It attempts to embrace a “riddim method” approach to music blogging — to focus more on musical texts that say things about music than wordy texts. I liked the playfulness and directness, as well as obliqueness, of such an approach. As you’ll see, I nevertheless also like the sound of my voice. The exuberant verbosity below — in stark contrast to what you’re reading here — embarrasses me a bit at this point. But, for me, blogging has always been about putting stuff out there — projecting my voice, so to speak — and hearing how it changes. Feel free to skip the words and listen to the tracks. This was first posted on 30 August 2005, an age ago.] 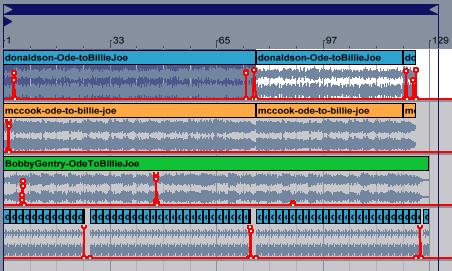 riffing off kid k’s inaugural post, i’d like to offer a couple mashups of my own for my first entry here. in this space, my posts will generally take the form of musically expressed ideas about music. much as i love words, it is music which draws me in, which informs my ideas, and which, in the end, communicates differently – and sometimes more precisely – than words.

this approach – this riddim method, if you will – is something that i have been trying to carve out over at my own blog, and i’m eager to explore it with some real focus in this new forum. look for more music than words from me here, but i’m already spilling more ink than i would like to, so let’s move on to the music.

“odes” is an attempt, like unscrewed music, to execute a musical idea that i had. if mashups are so good at demonstrating the proximity and distance of two or more pieces of music, then the form would also lend itself to new reflections on the proximity and difference of multiple interpretations of the same song. and it would do so rather directly: laying one version on top of another reveals their differences immediately and almost constantly. it also reveals their similarities and their serendipitous (and intentional) signifying on each other. a unique interplay of consonance and dissonance arises from such combinations – a crazy counterpoint made all the more beguiling when one warps the songs to match each other in terms of tempo and key (broadly interpreted).

not that other examples haven’t already transcended the genre’s predisposition toward novelty and nostalgia, but there is something about mashing covers that also seems to take mashups beyond simple signification – dude, eminem sounds so gay over that britney beat! in this case, the mashup has the wonderful effect of making it sound like bobby gentry is being accompanied by a double-quartet comprising tommy mccook’s and lou donaldson’s late 60s groups. their juxtaposition transforms a sparse, spooky country lament into an otherworldly torch song. saxophones weave around the voice and each other, rocksteady pulls against soul jazz funk, while the singer lags behind and darts ahead of her able accompanists.

the central song here is an exceptional one: gentry’s haunting hit of 1967, “ode to billie joe.” but the covers are remarkable in their own right. donaldson’s version is, of course, a classic, providing one of the most cherished and frequently used breaks that hip-hop has ever had. mcook’s version, probably as influenced by donaldson’s version as by gentry’s, cooks in its own way – a rocksteady instrumental, the riddim section bubbles on while their jazz-steeped, ex-skatalite leader blows away the competition (which, since he recorded this cut for duke reid, would have been his erstwhile bandmates over at studio one). together, the three versions make a fourth that seems to stand on its own legs, if woozily.

a brief technical note: i’ve pitched down gentry’s voice so that she blends better with her bands. also, despite the constant presence of some great drumming in both “rhythm tracks,” i couldn’t resist imposing another layer consisting of the intro break from donaldson’s version – the same break that you’ve heard in countless hip-hop beats. i’ve also looped the mccook and donaldson versions after their second pass through the changes, largely because both groups, later in their performances, depart from the regular progression that gentry’s version follows. that’s all well and good for a jazz jam, but here i thought it better to keep them all together. finally, i settled on a tempo in between all three versions, though significantly slower in gentry’s case, which for me, only serves to draw out her dreamy drawl.

and while we’re on the subject of cover-mashups (quick: someone suggest a snappier name), allow me to point you to one more that i’ve done along these lines:

this one i put together for my dear friends amy&ron who moved to honolulu a while back and may never move back to the mainland. (jah bless ’em.) here’s how i described the making of this mashed-up matrimony music:

for the wedding of my dear new-honoluligans, i was excited to have stumbled upon the existence – nay, proliferation – of the hawaiian wedding song, which has been recorded dozens of times. i went straight to kazaa and downloaded as many versions as i could find. i was lucky enough to locate renditions by jim reeves, elvis presley, andy williams, santo and johnny, and makaha sons of ni’ihau.

using the andy williams version as the tonal center, i pitched the other tracks around until i found relationships that sounded good to me, but not according to any “rules” of harmony. (you’ll hear that there is a good deal of “dissonance” between the tonal-centers i settled on.) i then “warped” each of the tracks – dig the incidental alias-tremelo effects – so that i could sync them in time at the somewhat arbitrary (but, i would add, stately and banging) tempo of 75 bpm (which happens to be 15 bpm faster than the original tempo of the andy williams “lead vocal”). in some cases, i applied filters and other effects to the tracks, especially since, as random, peer-to-peer mp3 files, they were not always of the highest quality. in the case of the fuzzed out slack-key track (the timbre of which i’ve come to like quite a bit), i used bit-reduction and white-noise to cover up the unlistenable digital belches of a shitty mp3. when pitched up to fit the andy williams tuning, the elvis sounded downright eerie and jim reeves hopped right on the kanye-wagon, so i decided to bring them in later in the song as “backup singers” of sorts. to round out the form, i use a couple classic breaks – the blackgrass and billiejoe – sometimes in combination, and thus give the crooning a bit more drive. (i like the way that the rolled snare gives the track an air of gravitas, if in an ironic kind of way.) finally, i cut and paste some parts here and there, such as the opening percussion loop, culled from the elvis cut.

so there you have it. interestingly enough, as you can see, the two mashups of covers (quick: someone suggest a snappier name) that i offer you here both employ the billiejoe break, which is a total coincidence but a nice bit of synchronicity all the same. 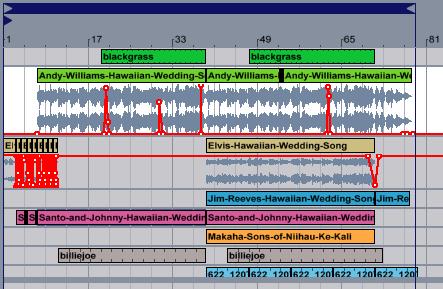 it is my hope that others will take this approach in foreseen (hendrix meets dylan along the watchtower anyone?) and unforeseen directions. i think it has a lot of potential, especially with some rich resources around. the tools are out there, too: live5 does mp3s, and its new-and-improved automatic beat-detection is scary good (except with reggae, which, with the strong offbeats and all, tends to come out upside down, or downbeat up).

the upshot of all this: get a concept. cute don’t cut it in a kitten factory.