[Well, the Riddim Meth0d domain has finally kicked the bucket, scattering our posts to the great Internet Archive in the ether, or elsewhere. I’m going to continue rehashing here certain posts that seem to merit the treatment. In that vein, here’s another bit of resurrected mashup poetics for you. I’m happy to report that the example below has found its way into a chapter I’m contributing to a forthcoming book, Pop-Culture Tools for the Music Classroom, edited by Nicole Biamonte. This was initially published on 13 April 2006.] 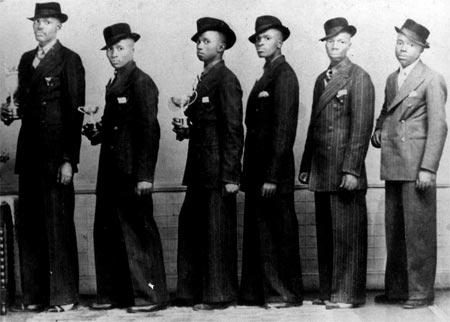 the story of solomon linda’s “mbube” (known to many more as the weaver’s “wimoweh” and the tokens’ “the lion sleeps tonight”) is a tortuous one.

recently, the award of longstanding royalties to the linda family and an article in the NYT has renewed interest in the story’s embodiment of issues of appropriation and just compensation. i’d also recommend reading rian malan’s rolling stone exposé, which tells the story in no small detail, not afraid to name names and indict various actors. not everyone will agree with malan’s perspective (esp. re: pete seeger’s complicity), but the narrative arc malan traces certainly provokes a complex – and, one hopes, careful – consideration of all the problems swirling around this case.

as a musical analog to these prose provocations, i decided to mashup four versions of the tune: solomon linda’s 1939 original, the weavers’ 1951 adaptation, yma sumac’s 1952 cover, and the tokens’ 1961 smash hit. what i like about the mashup is that, as i’ve noted before, it draws our attention to certain correspondences – and differences – in musical form and performance style. it shows us, for example, how seeger’s and the weavers’ version is both faithful to and far from linda’s and the evening birds’ performance. it does the same for the subsequent versions. (i was somewhat surprised, for instance, to discover that yma sumac’s version so closely followed the weavers’ that it not only contained the same number of measures, but it also ended with a big brassy chord on measure 87! – a feature i have retained to end the mashup with the bombast it merits.) above all, i like the way the accretion of new versions in this mash seems to symbolize and embody the accretion of meanings, money, and – depending on where you stand – injustice that have piled up over time and over dozens of repeat performances. it’s a bit of a musical mess, which seems appropriate.

i don’t want to say much more at this point, lest i forestall other interpretations. after all, as i attempted to argue last saturday, musically-expressed ideas about music should communicate, in some ways, more directly than speech about music. so i’ll leave you with the sounds and with a graphical representation of my edit(s). 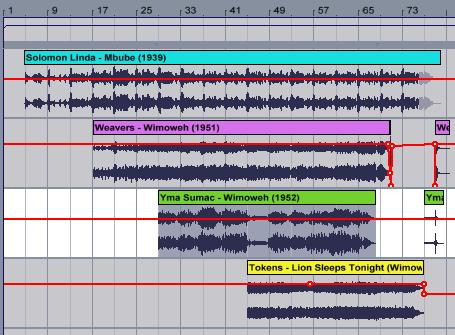 a technical note: among other manipulations, i have “warped” the songs so that their tempos match, i have pitched-up the tokens’ version to bring it – more or less (i didn’t fuss with microtones) – in the same key as the others, and i have arranged the songs so that to a large extent their forms correspond (in order to highlight the similarities and differences via simultaneous performance). also, overall i have attempted – in something of a critical-creative move – to “discipline” the subsequent versions to the linda original, as a musical “corrective” of sorts, or a mashup intervention, if you will. such explicit “tampering” is intended to underscore that my approach here is ultimately more artistic than scientific.