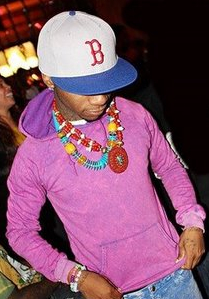 The 19 year old Pack frontman currently maintains 114 myspace pages (not accounting for the “SECRETE” [sp] pages he hints at in blog posts) all launched over roughly the last eight months and each showcasing five or six original songs and freestyles. He calls them “NOVELTY PAGES”, but that’s a disservice to the music within. The pages are numbered chronologically and listening to them in order is like reading an abandoned space journal, a slow descent into madness. Except it’s the good kind of madness.

On the earliest ones he was rapping regular over hit instrumentals and beats that could have been out takes from The Pack’s major label album. The songs have actual hooks, the lyrics about girls and partying. But as time goes on he gets progressively looser with it. The beats get faster and more adventurous, the fidelity lower. He starts to abandon traditional rhymes completely around the page #60, veering towards some sort of spoken word hybrid. By the late 90s he shouting on Chicago juke records and mumbling about shooting bitches in the bra over distorted as all fuck house. In the hundreds he’s rambling about eating with monkeys in space and having flashbacks to the East Bay Vivarium where he was moved to lie about having a pet iguana in a poetry contest. Sometimes he’s singing, sometimes he’s half rapping, sometimes just talking. Always he sounds just a little gone, but mostly joyous even in dark moments. The cynic could chalk this oddness up to trend hopping, a natural outgrowth of the cool-to-be-different Kanye/Wayne era. The realist might say drugs. It may be a little bit of both, but a third factor looms apparent on B’s suddenly immense catalog.

“When you’re on the internet time speeds up.” It almost sounds like a mission statement when B gargles these words on “Time”. …

See CBRAP for audio — oh, and about 100 MySpace pages.

5 thoughts on “Now That’s What I Call Music Industry”