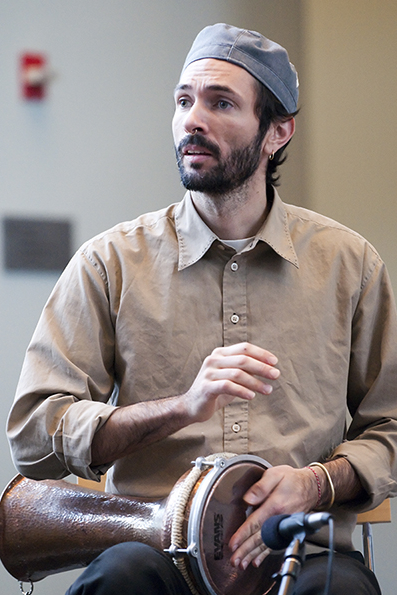 photo by Max Shay for The Hoot

Nettle’s residency at Brandeis — a series of revelations for yrs truly — is now over, but we’re not done hosting geography-defying beatbreakery just yet. Tonight at Beat Research, we’re celebrating our 5th anniversary (!) with the help of Grey Filastine, pictured above playing percussion with Nettle, who’ll be bringing his searing solo act to the Enormous Room.

Filastine is on tour at the moment to promote his new album, Dirty Bomb (get it), a sizzling mix of polyglot beat-heat from nearly every corner of the (post)world. I could start naming all the places he’s been and people with whom he’s collaborated, but Filastine does a great job of that himself over at his lively log, where he’s been explaining how he made a dirty bomb.

Take for example the story of “Hungry Ghosts” (made in Japan!), whose instrumental already haunts /Rupture’s Uproot. Or take, at a low-ish bitrate and for a limited time, the full vocal version, which speaks for itself —

If ur in the area, join us this evening to celebrate 5 years of Beat Research while getting yourself utterly twisted by Filastine’s bracing, bedazzling, border-free beats!