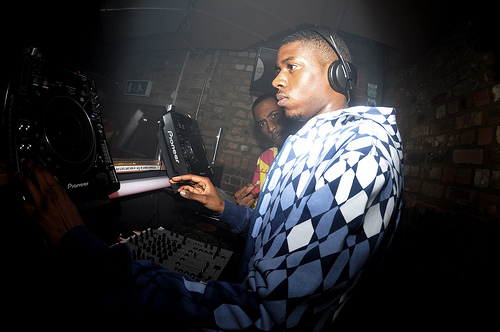 So, yeah, inundated by mixes, but finally got a chance to check out last month’s Rinse FM set by Butterz (ft. Terror Danjah), which shows grime (& its bastard cousin, dubstep) alive&well & wot-u-call-it as ever.

Comfortably contentious even! Esp w/ the notion that grime might be less than alive & well.

I love the moment at ~17min, during Durrty Goodz’s bracing “Grime Killers” (which assails “fake journalists” “talking bout ‘grime is dead'”) [currently streaming here], when you hear what sounds like a phone exchange on the radio. Cueing the listener to pay special attn, Butterz interjects, “Yeah, this is what I’m talking about.” We hear a classic bit of pseudo-socio-psychology (sampled from a radio talk show, it appears), blaming grime and other popular pursuits for the corrupt condition of “kids these days” (actually “young black men and women,” accding to one commentator).

caller: why is it that all these young rappers who are writing lyrics and poetry can’t even be successful in english?

butterz: coz they want to do grime, idiot!

He commends another caller bigs up himself (!) for “real talk” (a hip-hop expression, signified pon by the well-Bri’ish “lads”) during an attempt to explain by indicting teachers for not capturing youths’ imaginations as popular culture does (“either sport or rappin”), noting that young people “aren’t looking for sustainable careers.”

What I love most, though, is “not poetry, bro.” This gets at a longstanding pet-peeve of mine among hip-hop apologists — and that includes hip-hop scholars and conservative critics alike. I’m afraid that a number of hip-hop scholars have wrongly affirmed the language of elitist legitimacy in their projects to validate the genre (this was more a problem in the 90s than this decade). Describing rap as “street poetry” always struck me as worse than inadequate (even if a truism sometimes spoken by my favorite rappers).

Butterz resists the conservative critique that follows the reified/received wisdom that rap is poetry (whether in hip-hop or grime) precisely because he doesn’t want to cede that ground of critique to conservative critics. Grime is grime. English is English. Poetry is poetry. Maths is maths. Yuzimi? Don’t reduce grime’s particularity to some primitive version of what is recognized by the broader society and keepers of the canon. Chant dem dung. Brush them off. Tek weh yuself.

Real talk, lads. But build them sustainable careers, seen? We wanna keep on listening across the pond.