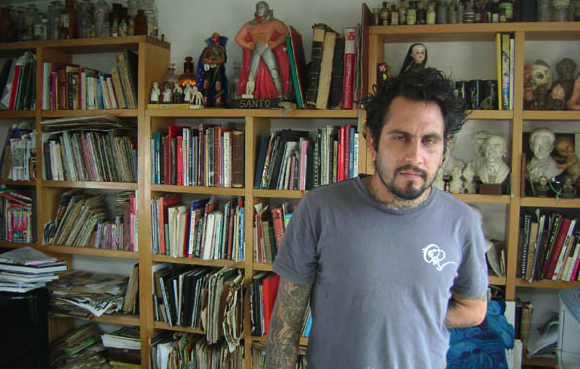 Dr. Lakra in his studio — photo by Daniel Hernandez

I’ll be playing some music tonight at the Good Life, from 9-11, as part of the afterparty of the opening of a new exhibition at the Boston ICA, the first US solo show of the work of Dr. Lakra. A tattoo artist who goes well beyond the canvas of skin, recently extending to vintage pin-ups among other pregnant texts, Lakra’s work is really interesting and provocative, gathering influences and styles from all over, and I’ll be doing my bestest to offer something in the way of sonic counterpoint. (Smearing guacharacas on unlikely audio partners seems one possible route, but I’ll take less obvious paths too.)

To learn more about Lakra, check out this profile of the artist by the prolific Daniel Hernandez. Here’s a quick pull:

“It is particularly fascinating that Dr. Lakra began his career as a tattooist and treats paper like skin,” says Friedhelm Hütte, the [Deutsche] bank’s Global Head of Art. “He makes use of images from popular culture in a very unique way, combining Appropration Art with folk elements. By ‘tattooing’ and overpainting 1950s glamour photos and nostalgic postcards, Dr. Lakra transforms them into bizarre studies of beauty, Eros, and transience.”

Indeed, at the core of his output lies the concept that any surface-literally, any at all-can be tattooed. Which is precisely what he does: on dolls, on coffee cups, on vintage magazines and posters that he digs up at flea markets, on any “skin” of his choosing. The result is what Mexican art theorist and longtime friend of Dr. Lakra, Mariana Botey, calls “displacing meaning in the chain of industrial cultural production.”

“Lakra has a very sophisticated understanding of popular culture,” Botey says. “In particular with certain kinds of low culture, where issues of taste are marking an interesting class subaltern structure. So there is a kind of logic in his work that makes him one of the best in the genre.”

In other words, as Lakra himself puts it, “low” vintage pin-ups and advertisements become altered time warps under his tattoo gun and border on the “high.”

“It’s the transformation of the object,” the artist says. “It is something that someone for whatever reasons considered valuable, or wanted to save. So the person saves it, archives it, and it acquires this other value.”

The ICA show runs from April 14 to September 6. The Good Life jam tonight is open to the public. Come on out & tattoo the floors with your feet.