Picó Picante is always a nice nice time, but this Friday they’ve really stacked the decks — 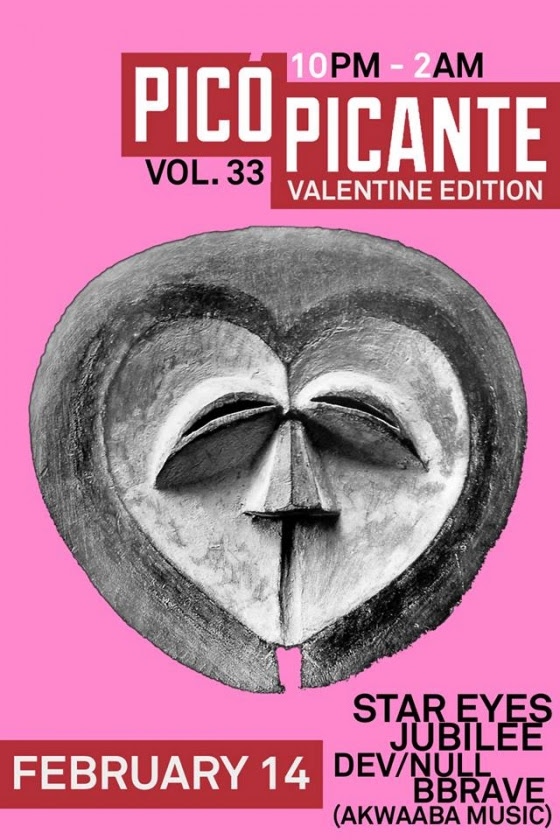 All these DJs are stellar and longtime friends & colleagues, and among other things, Jubilee has a poppin new EP out on Mixpak Records, and Dev/Null just posted a helluva 2 hour session devoted to atmospheric jungle from ’94-95 (which clearly presaged so much drum’n’bass that would follow) —

But I’m especially happy to welcome BBrave to town as he’s the only one I’ve yet to meet IRL.

I suspect Benjamin “BBrave” Lebrave needs no introduction here at W&W, but for those who don’t know, Benjamin is the force behind Akwaaba Music, an independent label devoted to African music of the post-Fruityloops era, or as he puts it “syncopated music made on computers all across the African continent.” Carefully and lovingly curated by Benjamin, a champion for genres and artists from West to East Africa, South to North, Akwaaba has served since 2008 as a crucial international platform for emerging artists, including acts as varied as Just a Band or FOKN Bois.

But BBrave’s DJ sets are more focused on dance music per se, as opposed to head nodding beats, pivoting around hiplife, azonto, kuduro, afrohouse, tarraxinha, coupé décalé, zouglou, and the like. Here’s 8+ hours if you’d like a taste ;)

And don’t miss Benjamin’s most recent column in the Fader, a Q&A + mixtape c/o kindred spirit, none other than “Mr. African Hip-Hop” Thomas “Jumanne” Gesthuizen, which also includes a gracious s/o to this here humble blog. Thanks, Bbrave — we look forward to finally welcoming you to town!