I’m a little late sharing the good news of the John Wizards, a producer-singer duo from South Africa who put together my favorite recording of this year. But given that even some of my most musically voracious friends have still not heard them, I’m clearly not too late. So let me put it like this: John Withers and Emmanuel Nzaramba deserve some of your time. We’ve already given them a lot of ours. 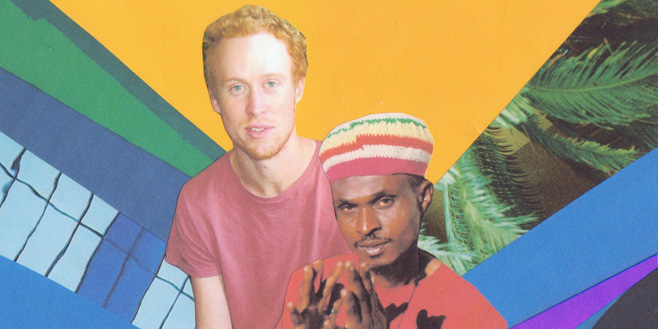 In a year with nuff great releases from smallbatch labels & independent artists (see: exhibits A, B, & C), John Wizards’ self-titled debut most captured my ears — and lent itself to realtime, and virtual, sharing with friends — and so I feel a need to sing its praises more publicly.

Let’s start where they do, the opening track, “Tet Lek Schrempf” —

A careful but whimsical opening, the track gestures in almost overture-ish fashion to the diverse musical corners the album eventually winds its way into. Beginning with something reminiscent of Soothing Sounds for Baby, by 0:45 we dwindle into a slowing-then-speeding piano arpeggio, eventually mirrored and replaced by a plucky synth lead and, at 1:05, a rollicking triple-duple beat. By the time we hear “Greetings from John Wizards!” at 1:45, we’ve arrived yet somewhere else, with live-ish sounds evoking birds and crowds and a warbling melodic loop. Along with an increasingly menacing, bubbling bassline, these occupy the foreground for about a minute before shoved aside by a bluesy, wailing guitar line, teetering on the edge of schlock. When the guitar jumps an octave at 2:52, the whole thing comes to screaming life, synthclaps splattering, like that’s exactly what we’ve been waiting for. As we lurch toward the end with the brief appearance of an acoustic riff that seems (in a moment of good judgment) second-guessed before yielding again to the electric wail, we get a good glimpse at the music’s meticulous construction — a sly moment of subtraction amidst all the accretion and allusion.

John Wizards’ restless approach to form and sui generis stylistic synthesis make them pretty irresistible even for a recovering-rockist listener like myself. Sure, there’s something very rock band at work here — plenty guitfiddle, pretty chord changes — but it’s balanced by a wealth of electronic signposts and presence, from the waveform drums & synths weaving through every track, to the occasional Shangaan electro-esque freakout, even down to the misleadingly low-fi demotape disco / bedroom bubblegum vibes of “iYongwe.” John Wizards pack an enchanting number of ideas into their music, but never too many, and always executed with care and panache.

Another fine example is “Lusaka by Night,” including the video’s parallel, playful imagery —

Much as I attempt to listen independent of biography and other narrative frames, the strikingly peripatetic quality running through the music seems consistent with the group’s official backstory —

These are the three places that band leader and producer John Withers either travelled through or lived in, and he feels have had a marked influence on his musical output. They also happen to be cities in which Emmanuel Nzaramba, John Wizards’ Rwandan singer has lived too.

John met Emmanuel while he was working as a car guard, outside a coffee shop in Cape Town. Emmanuel noticed the guitar strapped to John’s back, and they began to talk about music. Emmanuel had moved from Rwanda to Cape Town to become a musician, and John told him that he had been writing music requiring vocals. They didn’t get around to recording that time: Emmanuel quit his job, lost his cellphone, and moved to a new place and lost contact.

A year later (2012) John moved house and had got together some new songs and by chance ran into Emmanuel again: they were living in the same street. John invited him to his place to listen to reggae band The Congos, It turned out that he didn’t like them, but he did like some of the new songs John had written. He would listen to them once or twice, and start singing. The outcome of these evenings can be heard on their debut album.

It’s a compelling story, to be sure (except for that bit about not liking the Congos!). Tailormade for today’s vexed representational struggles and mixed modes of reception, the narrative seems to anticipate congealed frames of reference, playing into the enduring importance to audiences of place and experience, especially when we’re talking about Africa, even as it seeks to evade the cliches of cosmopolitanism and authenticity. It helps, then, that John Wizards’ music itself says as much — and more — about the serendipity and movement so central to their myth of origins. Narrative aside, this is great music which deserves to be heard far and wide. But can we put narrative aside?

Given the panoply of reference points and stylistic curveballs, could John Wizards’ relative obscurity in an ocean of new music have anything to do with the difficulty of finding a bin? In 2013? On one hand, I find that hard to believe. On the other, I suspect that the question of genre — and its enduring social and infrastructural contours — continues to shape circulation and reception of musical media fairly profoundly, even well into the digital era.

Personally speaking, I owe it to Gamall, the discerning dude behind Backspin Promotions — and to the fact that I blog and tweet and sometimes actually review new music for other publications — for bringing John Wizards to my attention. Gamall’s always on top of new electronic releases, affiliated with such stellar, dependable outlets as Hyperdub, Editions Mego, and Planet Mu — the latter of which, perhaps surprisingly, is responsible for bringing the John Wizards to the wider world. As such, John Wizards have been inserted into a rather particular musical ecosystem, and some of Gamall’s promo copy has been pretty straightforward in creating distance from certain frames of reference:

… a unique sound that many have compared to Vampire Weekend in reverse (African music looking outwards taking in European influences). Don’t be confused and think this is some kind of world music project though – it isn’t …

It’s telling that the few times I’ve seen John Wizards come across my radar have been via the likes of Catchdubs and Obey-City, two producers/DJs generally more drawn to the (wide) world of club music than tempo-hopping, shape-shifting, bedroom-studio guitarry stuff. So maybe this tack is working after all. I won’t be surprised to see a well-deserved late surge for John Wizards in years-end Best Ofs.

Suggesting that this approach to spreading the group’s music will continue, their second single arrives this week accompanied by two remixes which transpose the dubby, ethereal “Muizenberg” into different genres — new channels to surf.

Far as newness goes, though, the newest thing here is the synthesis, not the synths. There’s no reason that electronic music audiences shouldn’t be receptive to a stunning take on the world of sonic possibility grounded in southern African soundscapes. Drum machines and squealing, squelching synths are not, by any stretch, new to African music. In this sense, John Wizards offer one of various points of entry into a long, loopy history of musicians using technology to constantly reinvent the Sound of Africa.

Could this be a controversial thing to say about a duo comprising a heavy-handed white-dude producer and a black vocalist? As John Withers put it in an interview with Pitchfork (so, yeah, it’s not like these guys aren’t making the rounds — and good for them for that) —

I’ve got to agree with that. John’s and Emmanuel’s music is nice indeed. May it touch you too.