This Friday, at the very #rare time of 5pm and at a rather lovely spot, I’m psyched to be opening for two of my favorite (erstwhile) local talents: Rizzla DJ & False Witness, the two from the #KUNQ crew who cooked up the time-warped, globally-warmed, zombie beach party of Isla Toxico — 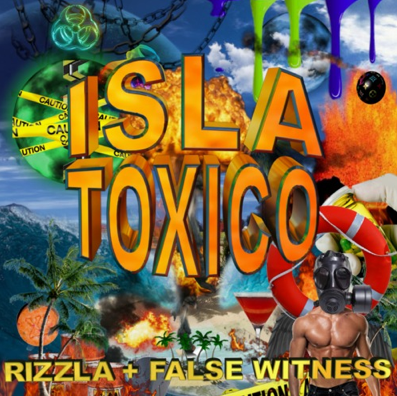 While we won’t exactly be performing on a toxic island (though you might consider Boston such at times), we will be right on the water, at the Institute of Contemporary Art’s waterfront space — definitely one of the nicer sunsetting spots in the city. They’re calling the event Urban Beach, which yeah, but I think that’s a theme we can all work with.

From 5-6:30pm I’ll be doing my best to level the vibes. Playing before dark can be as liberating as it is constraining, so I’m looking forward to the chance to play things that diverge from club imperatives. Haven’t had a chance to play a sun-drenched set in a while. Or slow music, for that matter.

Back to my cohorts, though: I couldn’t be happier to play opening act for these two. It’s been a pleasure to watch Rizzla’s distinctive productions and insurgent sets get the uptake they deserve. He & the whole #KUNQ crew bring together such a great set of shared & individual sensibilities, and the results manage to challenge as they seduce. Take, as another example, the very latest c/o Rizzla & Blk.Adonis —

Crossfading and fusing a special & specific array of styles, their shifting constellation of soca, hardstyle, ballroom, dancehall, and reggaeton transmits a finely-tuned address to a particular (if cross-sectional & always emergent) public — a musical beacon which worked wonders here in Boston back when Rizzla & co. were all resident here & giving this old town some NU LIFE.

That a progressive / queer / genderqueer / feminist / anti-racist / inclusive movement would rally around brusque dancehall anthems and raved-up dembow speaks volumes. Eschewing the imperial work that appropriation does, the #KUNQ approach gestures toward the more complex possibilities that emerge when we embrace difference. “Get to know it,” Rizzla says, “and you won’t want to rip it off.”

But he may have said it even better when he said –

Fortunately for us toxic islanders of Greater Boston, NYC is not too far away, so we’re still graced with the #KUNQ crew’s presence on a relatively regular basis. Hearing some #KUNQ beats echo across the harbor this Friday sure sounds like a vibes to me. Maybe you too?