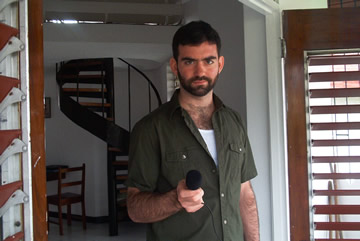 yung wayne wonder on the mic

Almost incredibly, it was ten years ago today that I put my first blogpost online, less than a week into a six month stay in Kingston for doctoral research, accompanied by my better half — my partner on Hope Road, as I ultimately dedicated the dissertation — who blogged along with me. Written in plain ol’ HTML — if I had known about the recently launched Blogger, I would have jumped on it — and posted to a domain that I let lapse long ago (but which is all archived here), it began bloggily enough:

it is my intention to keep a daily, or near daily, weblog of my thoughts, experiences, and other media that i record or create while in jamaica. not only is this a great way to force myself to articulate some things on a regular basis, but i hope that by sharing ideas, sounds, and images with a larger audience i can invite others to get in on the conversation.

A great deal of that first post is, frankly, hard for me to read (probably for you too — don’t feel obliged). And not just for the typical reasons of feeling like a different person and cringing at my naive former self. No, it’s just some really awful writing, almost the whole way through. Not only is it rather muddled (if, ok, a first post and an attempt to condense several days of activity and months of preparation), it’s riddled by doubt and qualification, on the one hand, and by smugness and narcissism on the other. Shit, maybe my writing is still like that, but I think I’ve been able to get away from some truly bad grad-school habits over the years, especially the endless hedging and explication. It’s funny that even then I was consciously struggling with these issues —

to some extent i am striving to expunge jargon from my vocabulary and to speak and write in clear, simple prose. on the other hand, i am swayed by the feeling that i can express myself more succinctly and precisely with these newly accented words of critical/cultural/post- studies. words which tend to sound either vague or big to the uninitiated. words like discourse and liminal.

LOL. I can’t even tell if I’m being sarcastic there at the end. Despite the cringeworthy moments, I have to remind myself that I was writing in a strange hybrid style mixing personal fieldnotes and public-facing presentation — not only unorthodox from the perspective of field research but with little aside from gonzo journalism as a guide (not that I was trying to do that either). It was a risky voice to assume at the time, and it’s still a dangerzone I find myself inhabiting here and on Twitter and every other (semi)public forum where private/unguarded/frank talk mingles with more carefully crafted performances.

I’d be remiss not to note that the way I ultimately got myself through that awfully awkward phase was, fairly simply, by keeping up a “near daily” regimen of putting my words together and putting them out there for anyone to see — just as I had promised to do. But I shouldn’t exactly say “got myself,” since it was the engagement and encouragement from friends and strangers that made these posts into something more than notes to myself. As folks found the blog and left comments and sent me emails, a deeply fulfilling and remarkably fast feedback loop began to emerge (especially in comparison to academic conventions and tempos). Over the years, such a discipline — in combination with a real community of co-readers (reading me but also reading the world along with me) — has helped me to find a voice that feels less awkward and more authentic. I’m grateful there’s a record of all of that, even if earlier versions of myself are sometimes, as they say, not a good look. 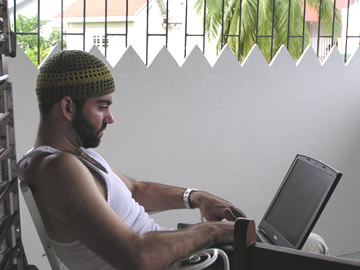 forever <3 that tam becca knit me tho

In lieu of reposting much prose from my initial post here, I’d like instead to highlight some short recordings I posted, mostly attempts to record and represent our new soundscape but a couple whimsical collages too and snippets that, looking back, seem to capture some little moments pretty vividly.

Like an aborted excursion on Hope Road, cut short by sudden rain–
[audio:http://wayneandwax.com/org/blog/february/beccablog-turn-and-rain.mp3]

Or the sounds of kids playing at the primary school across the street — quite a delightful part of our daily soundscape:
[audio:http://wayneandwax.com/org/blog/february/blog1-kids-playing.mp3]

Or the stray dogs that liked to hang out in the yard behind our apartment and bark and howl, often pathetically, at night — not quite as delightful, but an inescapable part of the sound of Kingston:
[audio:http://wayneandwax.com/org/blog/february/blog1-third-world-dogs.mp3]

A few weeks later I chopped up the barking and whining for “Dog Gone Diwali,” a humorous attempt to cut-and-paste some very local sounds into a riddim that was at that moment totally ubiquitous and which I wanted to better understand by recomposing (this was the spring that Sean Paul’s “Get Busy” ran the world, though I swear “Sufferer” was the more popular Diwali voicing inna JA):
[audio:http://www.wayneandwax.com/music/dog-gone-diwali.mp3]

Along those lines, my initial post also included an odd bit of dancehall concrète, a piece I whipped up in front of and with the help of a live audience at an ICT conference Rebecca and I attended in the hope of making some contacts to help with our volunteer work in prisons and schools. This was a little schtick of mine back then — making a little ditty out of the sounds people would make in front of my laptop — sometimes with great results, sometimes more meh, but usually at least producing an interesting memento of sorts, e.g.:
[audio:http://wayneandwax.com/org/blog/february/ict.mp3]

Over the course of this spring I hope to revisit a number of the more interesting posts from our likkle Jamrock fieldwork adventure. If they’re not too embarrassingly full of qualifiers and parentheticals, I might even run one on occasion as a full re-post here. I don’t think any readers, even longtime friends of W&W, should be too annoyed. I mean, really, it’s been ten years! 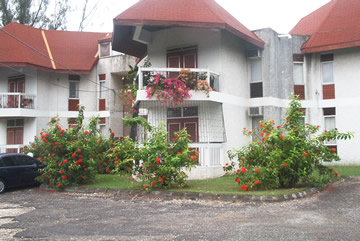 our sweet spot on hope road