Allow me to remind that next WEDNESDAY, July 25, Beat Research will play host, in the Good Life‘s booming basement, to a full-blown reunion of Boston’s legendary Toneburst Collective. 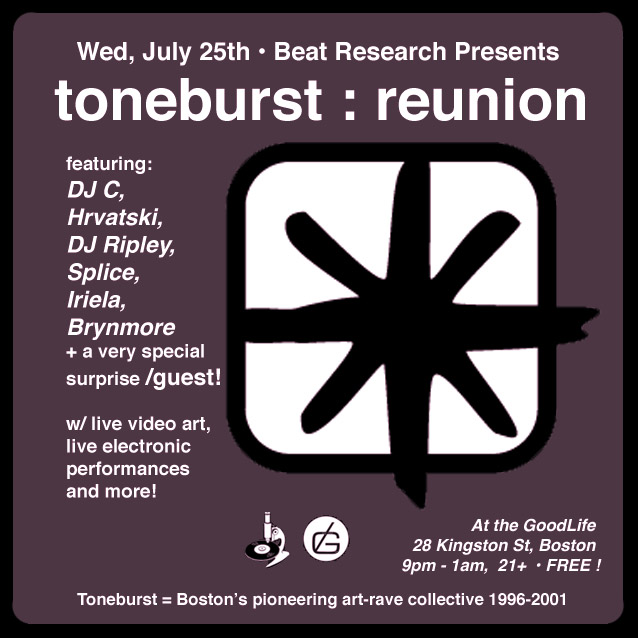 Bubbling up from Boston’s underground during the late 1990s, Toneburst was a loose-knit crew of DJs, electronic musicians, and video and installation artists, who together produced approximately 20 large-scale multimedia events in offbeat locations around New England and New York. More carnival than rave or concert, the crew’s productions mixed experimental beats, video, and performance art in unorthodox spaces. Beyond throwing great parties, Toneburst provided a platform for such influential acts as Kid 606, We™, Keith Fullerton Whitman (aka Hrvatski), and DJ /Rupture (a founding member).

Indeed, let me turn it over to Sir /Rupture himself, who posted this brief recollection a few years back:

on the quick– it started in the Boston area late 1996, mostly seeded by a collaboration btwn a group of friends & artists mostly at Massachusetts College of Art and Harvard, who met via music, with the particular help of Boston’s great radio scene. The first wave of Toneburst event producers/djs/video & installation artists were: DJ C, DJ Flack, Jenn L, Lynn S, Mike ESP, Sasha C-S, Rafi L, Embryo, Alex R, me (DJ Rupture), with the support from a Gene S and Vincent from WZBC’s NCP radio shows and a LOT of other people. we really were a collective.

Later on we met with Hrvatski and Moosaka/Professor/Radioactive of StreetForest Music and all sorts of other heads. Over the years we put out 2 CD comps, the first one of DJ C’s first label, Bliss, the second one a free CD-r giveaway.

we were inspired by common linkages and energies and readiness to shake things up (this wasnt organized around genre or even artistic medium) and determined to fight boston’s stodginess and segregation–cool stuff on radio and our community was filled with artists, but no physical space to manifest & throw offbeat events. we started & remained nomadic, trying to do “monthly experimental audio-visual adventures”. all our parties were $5 or less entrance fees. no merchandising, sometimes we’d even have a ‘noise toys’ improv room where you’d get a discount if you brough a cheap noisemaking toy.

DJ C was doing groundbreaking live dubby d&b, Embryo was on a live junglehop vibe, i had a radio show, Spool was more on live idm vibe, Jenn did amazing graphic design & video, Lynn specialized in installations, etc, it all just kinda gelled..
basic early format was a more beats/dancing room and a more experimental/listening room, always pretty eclectic and very open-ended, with lots of video and environment-transforming installations.

at our first Toneburst party performers& event producers outnumbered audience! we made an impact over the course of a few years (dwindling as people graduated and gravitated elsewhere, boston’s scourge of transience).
strangers still come up to me and talk about the Toneburst days.

A comment or so later, DJ C — who would go on to found Beat Research, not to mention Mashit Records — helps round out the picture:

Some credit is due to our friend Slide, who had been an undergrad student in the Harvard electronic music studio, and in the mid ’90s was attending grad school at Massachusetts College of Art, in the Studio for Interrelated Media. She was organizing a series of experimental events at the time called The Passing Show, which brought together people from Harvard, MassArt, and elsewhere. It was through those events that I (DJ C) met up with Sasha C-S (/splice) and Rafi L (Together they formed Embryo). I was working on my Electro Organic Sound System project at the time, and when I heard Embryo’s ambient-dub infused jungle experiments, I knew I had found kindred spirits. They were the ones who introduced me to Jace (/rupture) who at that time was doing a great radio show on WMBR, the MIT radio station. The first party I did with those guys was called Electro Organic Sound System vs. Embryo, and took place in Gloucester, MA at a place called Artspace. Most of the people who would form the core of the Toneburst collective were there, including /rupture, Mike ESP and Xrae (Spool), Jenn L (Jade), Lynn S, as well as some great DJs from WZBC, the Boston College radio station. By the end of that night a bunch of us had decided to try and keep doing this kind of thing, in alternative spaces, on a semi-regular basis.

Jace, Mike, Raffi, Sasha, and maybe some of the others, had been to Soundlab parties and were really inspired. Jace, Sasha and I started a torrent of emails trying to decide where our first event would be and what it would be called. Jace came up with the name Toneburst (taken from the name of a Stereolab tune). We did our first event called Toneburst at Artspace. I think it was in Oct. ’96. The next month we did an other Toneburst event, this time our first in Boston (Alston). From there it took off, and as time went on we accrued members like DJ Flack, Aaron Spectre, Hrvatski, Moosaka (with Radioactive and Professor Shuman), and many many more.

At their peak the Toneburst parties were brining in 8-900 people to bask in the immersive environments. Ahh the good ole’ days!

No nostalgia, but we’ll be revisiting and re-imagining those good ol days in fine style next week. And let me say, as a former attendee and admirer of their parties, and someone who has since had the good fortune to find myself part of the extended family, I’m just thrilled this is happening. Wouldn’t miss it for the world — and if you happen to be one of the few still in the Boston area this time of year, neither should you!

Oh, and if you need any more motivation, next week’s show will include the premiere of Avuncular Bass, a trio comprising myself and DJ Pace (both triggering samples) and the mighty DJ Flack (playing an instrument he invented, a sort of analog bass synth on a stick, which I insist on calling the “bass stick”). We’re a veritable band! Really! We’ve even been rehearsing. Trust me, it’s gonna be special.

In addition to our trio, we’ll have a real fine crew lending their magic to the night, including DJ C, Hrvatski, DJ Ripley, Splice (aka MIT’s schock), Iriela, Brynmore and a very special surprise /guest!