Tomorrow / today / whenever it is as you’re reading this — Tuesday Feb 28 marks both the release of Munchi’s Moombahtonista EP and as mentioned last week, his first appearance here in Boston, at none other than Beat Research! According to the opaque metrics at Zuckerborg, as I’m writing this some 56 registered users are “Going” to come thru, which is cool. I’m sure the place will pack up. It’s gonna be a special one, no doubt.

As I also mentioned, I gladly penned the notes accompanying the release of Munchi’s EP. It’s an odd job juggling promotion with what I think is also valued as my ability to be a critical observer, but I stand behind the text. (And I appreciate the affirmative nods.) Of course, I’m happy Munchi likes it — and that he thought of me to write it. I should give him some real credit too: he had lots of ideas, as always, and his own ability to articulate where he’s coming from is, I think, one of his greatest strengths as an internet-era artist. Anyway, you can judge for yourself (I added some links for fun):

Soon as the first moombahton edits hit the net, Munchi was ready. Slowing down Dutch house tracks to make mutant reggaeton made a lot of sense to a resident of Rotterdam with roots in the Dominican Republic. Munchi knew as well as anyone (and better than most) that Dutch house and reggaeton were kindred genres, each a skip and a jump away from dancehall reggae. He began cooking up his own moombahton that night, emerging with much more than another set of edits. Arguably the first originals of the genre, Munchi’s tracks were built from scratch, imbued with touches of baile funk, cumbia, kuduro, bmore, samba, breakcore and more. Unlike Dave Nada’s seminal edits or influential remixes by A-Mac, Uncle Jesse, and Melo making the rounds, Munchi could put his name on his tracks front and center. Blowing up the blogs, he proved himself prolific and popular almost immediately, releasing acclaimed promo packs by the pound and building a devoted audience.

By pursuing his own singular vision of what the genre could be, Munchi pointed the way — lots of ways actually — to move moombahton beyond surprisingly serviceable novelty remixes in order to make it a genuine genre. His cross-breeding fusions even birthed a substyle he dubbed moombahcore, a steroidal take on the sound that now boasts hundreds of its own adherents. After Munchi’s wildly successful experiments, moombahton became a lot more kitchen-sink. This EP collects the classics, marking the moment that Munchi blew the frame open. Club wreckers that set the stage for a wave of producers learning to love the space between the kicks, the place to wind your hips. You’ll find it all here: evocative samples, epic build-ups and drops, thick-ass drums, sudden jokes and, of course, that trademark jingle. It also features new twists on old bangers, like lacing “La Brasileña Ta Montao” with brand new vocals from Angel Doze, Munchi’s favorite reggaetonero, making it the first real meeting between moombahton and its Puerto Rican cousin.

Come hear the man live if you can. I’ve seen him in action. You gotta be ready.

Oh & nice EP art! Props for the totally understated use of boobs — 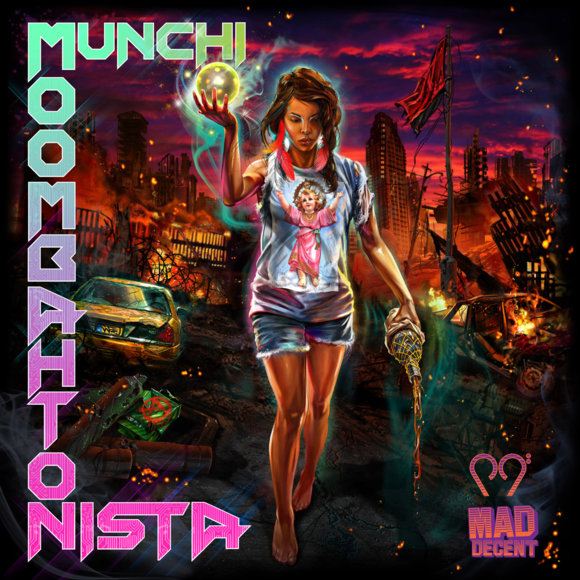