Somerville DJ Brinkley Sound makes his club debut after a long tenure spinning both punk and disco shows on left of the dial radio station WHRB, and making noise with local bands including The Sinister Turns and Hedge Fund.

In homage to his namesake, John R. Brinkley, founder of the nation’s most audaciously powerful “border blaster” radio stations, Brinkley Sound will bring a mixed and re-mixed bag of pan-American party-starting beats, with a nod to the sample-heavy sounds of New Jersey club music. Somewhere between hardcore punk and ‘ardkore rave, this is music for all-night dancing and all-night whosampled.com checking alike. 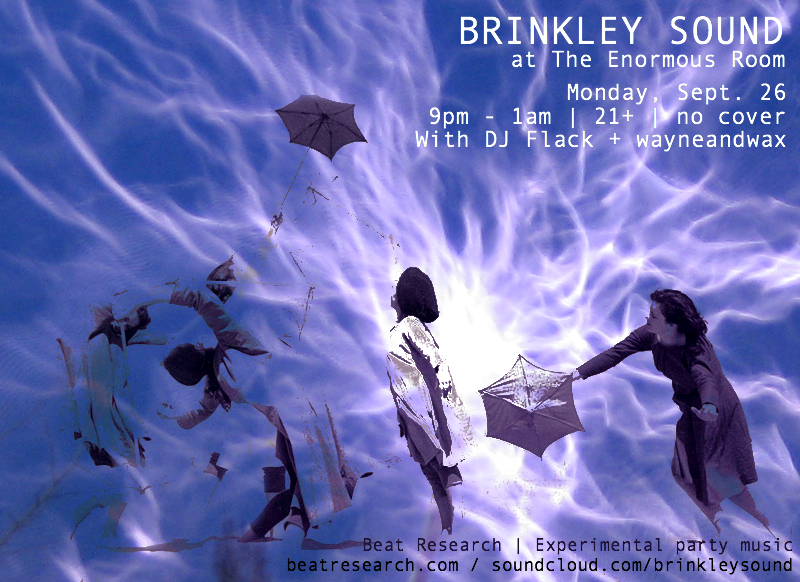 For a taste of the sui generis sound DJ Brinkley Sound has been developing, check his soundcloud for tracks that draw on juke, dancehall, clubb music, punk, and other forms of #blackswag, e.g. —

As it happens, Mr. Brinkley (aka Dan Thorn) took a class with me last spring and wrote a really great paper on the “Aural History of Jersey Club Music,” including trenchant observations on SoundCloud ecologies and the remarkable social life of the “bedspring” sample (which you might hear turn up in a track or two of his own). I’ve been pushing Dan to make a mini-mega-mix of the bedspring thing, but in the meantime, I’ll leave you with a brief bit from his term paper, which I’ve been encouraging him to publish somewhere officialish (editors, holler):

From Atlanta to Baltimore to Newark (with detours into the Caribbean), the “Some Cut” sample is a prime example of Jersey club’s status as a unique subcultural genre that nonetheless transcends regional sonic signifiers. While the sample itself is heard as a unique feature of Jersey club, it also points to the music’s place in musical dialogue with many other localized dance music genres. By reusing “Some Cut” in novel ways, as a rhythmic element or as a subtle thematic comment, Jersey club producers have localized the song to a new context of use while adding value for future producers (who can now use the sample in the same or different ways), fulfilling Henry Jenkins’ requirements for “spreadable” media. Like Jenkins argues about this type of participatory media, Jersey club’s use of sampling emphasizes the agency of actors typically recognized as simply ‘consumers’ of music (in this case, high school students releasing music noncommercially) to change the meaning of media without overruling its previous definitions.

Despite the relatively linear timeline behind “Some Cut”’s deployment as a staple of Jersey club remixes, the genre as a whole can be only poorly understood by such a genealogical model, which requires distinction to be made between singular, original “texts” and subsequent adaptations. Rather, Jersey club remixes are what Jonathan Gray has called “paratexts”—materials that exist “outside of, alongside, and intrinsically part of the text.” Jersey club DJs rarely if ever remix existing club tracks; rather, they go back to the source material and create their own iteration, often within the same time frame as the first remix. It is therefore impossible to authoritatively say that any one Jersey remix of, say, Lloyd’s “Lay Down” is the exemplary text against which all others are adulterated versions—a fact that club blogs have admitted when simultaneously posting several remixes of the same source material by different DJs. If, as Devereaux has argued, Baltimore club music is an expression of an inclusive urban identity, Jersey club might be understood as an expression of an inclusive digital identity, an example of music as social life where the online production, reception and discussion of club tracks is inseparable from their production and reception in New Jersey and elsewhere. The social aspect of Jersey club must be understood as thoroughly as its musical features, in what Georgina Born has theorized as a “constellation of mediations—sonic, but also social, material and technological, discursive, corporeal and temporal—that together constitute what ‘music’ and musical experience are held to be.”

Jersey club producers turn the most ubiquitous of the pop songs forced upon listeners worldwide into raw material for remixes that present those songs for what they ultimately are—bursts of possibly interesting sounds competing for one’s attention among a multitude of others. Their remixing practice can therefore be understood as a decommodification of music acting alongside and against music’s commodification in the form of CDs, MP3s and other formats. The music increasingly takes the form of noncommercial, Creative Commons-licensed tracks for free download on SoundCloud, which demonstrate not only their young producers’ skill with media production technology (one form of ‘media literacy’) but also their canny ability to approach pop music as a means for acts of individual creativity, without being intimidated by the professional aura that rearguard critics like Andrew Keen mistake for a sign of a work’s quality.

Also, he had this to say about Dubbel Dutch’s great Screw Jersey mix from a little while back —

Screwing (Jersey) club is a pretty clever idea, since many club tracks sample vocals from slower pop/hip-hop songs without changing the pitch – the end result is music at close to the same tempo as a fair amount of the sample material, but this time with all the vox in that distinctive screw range. It’s an interesting way to hear the songs again (I especially liked hearing “Obsessed” after this process) and I guess it couldn’t have worked so well if club music pitched its vocal samples to match the tempo.

Expect to hear all of this and more tonight at Enormous Room as Dan takes us to the Brink.