Got a piece in this week’s Phoenix reviewing the latest offerings in Heartbeat’s ambitious Studio One reissue series, running the gamut from ska to dub. Check it out. As usual, see below for the “director’s cut.” 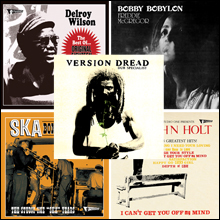 Heartbeat Recordsâ€™ Studio One reissue series continues not only to shore up the legacy of Studio One honcho Coxsone Dodd, but to present an expansive, rich portrait of Jamaican popular music more generally.

Ska Bonanza, a 2-CD set collecting 44 songs, offers listeners a wide-lens perspective on the pre-reggae sound of 1960s Jamaican pop. Gaining prominence just as Jamaica gained independence from England in 1962, ska emerged at the same time that jazz, R&B, and Latin dance styles defined cosmopolitan cool from Chicago to Cape Town. Swing was king, even in Jamaica, and many of the islandâ€™s jazzmen played in big bands and on cruise ships, cutting their teeth on Lester Young solos over romps borrowed from Basie. Spurred by Coxsone to record for the local market, ska gave Jamaica’s best musicians a chance to play to hometown tastes, blowing soul jazz style over hopped-up, localized R&B songs, mambo numbers, and movie themes. The music features more elaborate chord changes and 12/8 shuffles than most subsequent Jamaican pop, but the players sway as much as they swing, bouncing nuff 3s against 2s and adding a characteristically Caribbean lilt to that ol’ American push-pull.

For all their localization, many tracks on Ska Bonanza demonstrate a sustained engagement with American and international pop, sometimes in the form of awkward imitations but often in delightful, distinctive funhouse-mirror manner. The many covers of familiar pop songs on Ska Bonanza are fine examples of the cherished tradition of â€œversioningâ€ in Jamaican music: Smokey Robinson gets interpolated, to use the contemporary legalese, as his “Choosy Beggar” becomes Rita Marleyâ€™s “A De Pon Dem,” while the Four Tops’ well-worn “Same Old Song” gets a new set of lyrics and an otherwise remarkably reverent treatment on The Gayladsâ€™ “Stop Making Love.” On the more local side, a young Lee Perry sings a charmingly bawdy bootie tune (“Sugar Bag”), but he sounds downright demure next to the nonnuendo of Jackie Opel’s “Push Wood.” As numerous as the vocal cuts are instrumental numbers, serving as fine vehicles for the sinuous solos of Don Drummond, Roland Alphonso, Tommy McCook and their woodsheddinâ€™ brethren. There are lots of songs about broken hearts and rude boys and plenty of proto-beatboxing. The collection runs the gamut from inspired anthems to treacly ballads, and while some songs are brilliantly and warmly recorded, lovingly touched-up, and transcendent in form and content, others sound more dated but are valuable nevertheless in providing a good sense of ska style.

Despite its foreign infusions, ska embodied for many a modern Jamaica coming into its own, embodying people’s hopes and dreams in its bouncy, uplifting grooves, cosmo cool, and indubitably local character. As ska gave way to the slower strains of rocksteady a few years later, many heard the music expressing a fading ebullience. But people still sung of Jamaican aspirations and once again the sounds of black America served as crucial symbols. A trio of Heartbeat’s other recent releases help to chart this complex terrain, with collections representing the peak rocksteady and foundational reggae recordings of Alton Ellis, Delroy Wilson, and John Holt. Under Dodd’s hand and supported by Studio One’s inimitable band, the three singers rose to prominence in the mid- to late-60s. Motown and Memphis figure big on these recordings. Steeped in the Sam Cooke school of soul crooning but with an edge all his own, Ellis’s smooth tenor helped to herald the shift from ska’s forward march to rocksteady’s easy skank. Often featuring Alton’s sister, Hortense, I’m Still in Love with You showcases the Ellis siblings on a solid set of songs about longing, love, and the Lord. Another early star for Studio One, Delroy Wilson got his start as a 15-year-old weapon for Coxsoneâ€™s soundsystem, recording â€œspecialsâ€ to ridicule their opponents. Wilsonâ€™s young start may explain why his soulful turns often sound less self-conscious than those of his predecessors or contemporaries. His take on the Temptations’ “Get Ready,” for instance, shows at once how undeniably original Jamaican versions of American pop songs can be. John Holt has a haunting voice, which seems especially appropriate when heâ€™s singing the sort of over-possessive long songs that were once all the vogue (and now are mercifully rare, if not quite quaint). Not unlike his contemporaries, Holt gives shape to worlds of possibility amid bleak social and political landscapes, and embitterment and disappoint exist alongside celebration and faith. Supported by the Paragons on the cautionary “Change Your Style,” the singer addresses Kingston’s infamous, rebellious youths: “Hooligan business cold,” Holt harmonizes, “Let only love fill your soul.” And he throws in a cover of George Harrison’s famous R&B ripoff (“My Sweet Lord”) for good, mirror-mirror measure.

Although such seminal rocksteady and early reggae recordings would seem sufficient to affirm Studio One’s unique legacy, Heartbeat has gone further in its recent reissues, releasing some heavy, 70s-era roots reggae from the famous imprint. Featuring another Studio One child prodigy, Freddy McGregor’s Bobby Babylon stands as one of reggaeâ€™s stronger albums. Recorded in the late 70s and released at the dawn of the dancehall era, the album sounds at times almost sentimental in its pop-song structures and prevailing plaintiveness, but militant songs such as “Take Over Now,” “I Am a Revolutionist,” and the title track leave little doubt about McGregor’s engagement with historical and social themes–or whether ska really did represent “independence” for the people of Jamaica. The reissue includes a number of bonus tracks, including an extended mix of McGregor’s “When I’m Ready” featuring the talented talkover of Lone Ranger, as both ride the riddim underlying John Holt’s 1970 smash “A Love I Can Feel.”

Collecting 18 bass-heavy, slow-as-syrup cuts–all B-sides, or “versions,” of Studio One offerings from 1966-82–Version Dread may be the gem of the bunch, especially for the â€œmeditativeâ€ listener. Selected from Wilsonâ€™s own prized collection of Studio One 45s, the disc presents Studio Oneâ€™s somewhat restrained approach to the arts of “versioning” and “dubbing” (i.e., manipulating previous recordings with studio technology to create new forms). Less showy than the work of Scratch Perry or King Tubby, the dubs on Version Dread are distinctive and deep all the same. Of course, Studio One possessed an unrivalled catalog from which to version, and here one hears some of reggae’s biggest songs and riddims tweaked and remixed in reverent, subtle fashion. Between Dodd’s expert ears and the sonic magic worked by his indispensible engineer, Sylvan Morris, thereâ€™s plenty of play at hand: sounds tumble across time and space, pinging around the stereofield and spinning off in polyrhythm against beats which seem concrete â€˜til they melt in mid-air; snatches of singers and DJs ghost over hard drums and big bass while echoes of horns and guitars, filtered down to shadows of themselves, lurk beneath the texture and erupt occasionally into focus.

If this is the sound of a legacy, it is one that is rock solid but infinitely malleable, classic but forever modern.