In this week’s Chicago Reader, Miles Raymer offers an informative and interesting account of SoundCloud’s recent policy shifts, as chronicled and critiqued here (and here and here) at W&W. I’m happy to note that I make an appearance in the article, alongside the one and only Catchdubs, providing some familiar points (if you’ve been reading here) in far less concise language than I typically try to use (ah, real time!).

Here’s a little excerpt, but do read the whole thing:

SoundCloud’s decision to use Audible Magic points to a larger question: How big can a music-hosting service get while still supporting DJs and remixers? Is it possible for a site large enough to show up on the radar of the major labels to avoid accepting the majors’ strict-constructionist views of copyright?

“Deejaying is essentially playing other people’s music,” says Catchdubs. “Most people kind of realize that it’s 2011 and we know what the deal is with a DJ mix, especially when you’re not putting it up for sale. You know, I think there is a bit of a disconnect between the socially accepted uses of copyright and sort of what is legally down there on paper and, you know, the decision-making process of major-label legal departments and the RIAA and shit like that.”

SoundCloud is at a crossroads here. Right now its practices appear to defer to rights holders, allowing labels and publishing companies to determine almost unilaterally what counts as infringement—a stance that puts an undue burden on uploaders whose employment of copyrighted material might meet the criteria for fair use. Were SoundCloud to take the nobler and more difficult path, it would devise a policy that could differentiate between DJs and remixers on one hand and pirates on the other. Of course, it’s easier and cheaper for SoundCloud to just keep serving DMCA notices to its most passionate users—though taking that route could drive off enough of them to make it very expensive indeed.

“If it becomes too annoying,” Marshall says, “people are going to pick up and move to the next thing. That’s what I’ve been observing in all of these things. Either the platform completely disappears, or something easier with less hassle pops up.”

Cherry on top, someone over at the Reader shopped up the SoundCloud logo to make it rain on a DJ — and not in a good way — finally filling a request I made over two months ago! 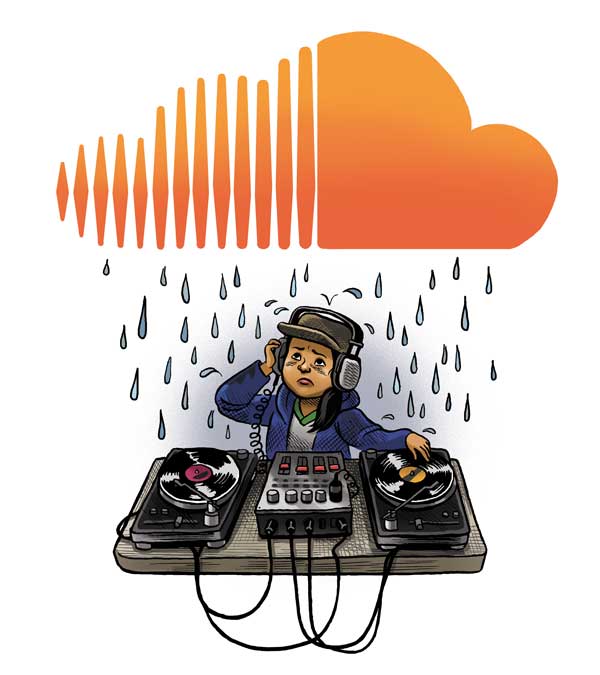 In related news, I think James Blake might be baiting me. Mr. Next Big Thing recently told Spin that

Remixing is like musical prostitution. I think it’s really cynical and vacuous; I’m batting offers away like flies. It never used to be like that. Ray Charles didn’t need five remixes. The song speaks for itself.

Which leads me to wonder: if making a remix is akin to “prostitution,” then covering a Feist song is like… ?

As I’ve pointed out, taking the position of the haughty auteur who loathes remixes is especially ironic given how Blake built his own name by remixing the music of others, from Lil Wayne to D Child to Untold to — if we think of sample-based tracks as remixes of sorts, which they surely are — Brandy, R. Kelly, Kelis, and Aaliyah. All to overwhelming acclaim.

But I guess that act got tired once Blake found his “real” voice. Or once the whole business got sullied by money. There’s a big difference between pimping yourself out and just fucking around. Maybe Blake should take a cue from his legion fans and try just doing it for fun again?

Anyway, I can’t help but pick out another soundbite he offered the magazine–

Once I’ve made my music, where it goes is not my problem.