Last week month marked the release of Airtime, an EP from Masalacism Records. A happy convergence for me, the project brings together two sets of friends from far-flung parts of the world: Canada’s Masalacists and Botswana’s Ruff Riddims. The EP features the singular style of MaSuper Star, a dynamic duo who teamed up last year with local producer Red Pepper, aka Moemedi Ramogapi, for an epic recording session at his studio in the town of Palapye, about 150 miles northeast of Gaborone. 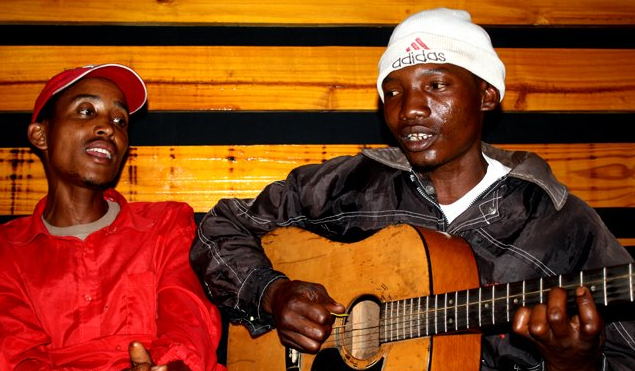 I’ve been in touch with Moemedi since the spring of 2005, when he showed up in my inbox to thank me for some beat-making tutorials I had posted to the web — fruits of the digital music workshops I was giving in schools, community centers, and prisons in Boston, MA and Kingston, JA. He had tracks to share and questions about linking up with reggae vocalists and getting his stuff out there. I thought his early productions showed a lot of potential. I encouraged Moemedi to keep at it and sent his rough riddims around to friends like Ghislain Poirier and other DJs/bloggers with an interest in African hip-hop and reggae. I also recommended he check out Versionist, back when that existed, where his productions landed plenty of praise and constructive commentary. (Ah, the early days of p2p music industry.)

Moemedi and I have been corresponding pretty regularly ever since — mostly via gchat — and I’ve admired the ways he’s refined his operation, whether steadily improving his tools and skills as a producer, or crowdsourcing a design and building a beautiful studio — 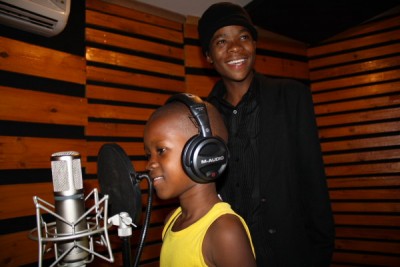 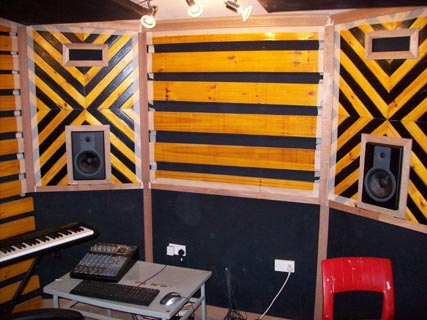 — or this latest turn: collaborating with nu-world labels, including the guys at Masalacism, Akwaaba, and Famula (which will release a Danny’s Bass record later this year).

Like lots of music-industrial activity today, it’s all an experiment, so in addition to collaborating with these three labels, Moemedi’s also releasing stuff directly. (Ruff Riddims’ biggest hit to date has probably been Skeat’s kwasa-house anthem, “Dumelang,” which spread like blogfire and found itself in regular rotation among the Dutty Artz and Ghetto Bassquake crews, to name a couple kindred collectives.)

When I first heard MaSuper Star, I couldn’t help but agree with Moemedi that, “they are FIRE, MOLELO.” I was quite struck by the combination of the duo’s stripped-down sound and Moemedi’s digital beats — especially on the title track, where the drums remind me a lot of the post-Coolie Dance riddims of 2004 (Scoobay!). Give it, and the rest of the EP, a listen:

I was convinced that this fusion of contemporary dancehall rhythms and acoustic elements could find an audience, especially overseas where the soukousy guitars would dovetail with a resurgent interest in afropop of all sorts (whether stoked by the likes of Vampire Weekend, The Very Best, or loving re-issues). Interestingly, and a little ironically, precisely because of this same presence — what Moemedi calls the “kwasa influence” — MaSuper Star might prove a difficult act to promote via popular media in Botswana. Local radio DJs, for instance, have refused to play some of Ruff Riddims’ productions because they’re supposedly “not urban”; according to Moemedi, they just want hip-hop. Apparently, a certain target audience rejects familiar guitar figures for differently accented signs of the global modern. But this all remains to be seen. I’m hoping, as is Moemedi, that his stable of artists can catch fire in Botswana as well as abroad.

The other odd side to this strange kind of currency is that Ruff Riddims’ more straightforward reggae and hip-hop productions are less likely to succeed in the metropoles of the so-called Global North, so suffused by such sounds as New York, London, and Toronto already are. To my ears, then, Ruff Riddims has a better shot at finding support in North America and Europe by pushing the productions that signify the difference being in Botswana should make (at least for certain listeners). In other words, to go for the niches opened up by “world music” as aesthetic and institution.

Far as I can tell, at least from reviews such as David Dacks’s recent piece in Exclaim, this hunch about the music’s resonance may be borne out with the release of Airtime:

MaSuper Star aren’t the future of music: they’re the present. These superstars are a duo from rural Botswana, composed of Kenny and Soops, who find their music being released in Canada thanks to the internet-driven forces of World Music 2.0. Soops plays a homemade guitar fashioned from a can, while Kenny sings. …These are street songs, simply executed and instantly hypnotic. MaSuper Star’s themes are universal, though far from the boilerplate topics of peace, love and world unity. Rather, title track “Airtime” is a plea from a long-distance love to send phone credits. Its hook is intoned by a plummy, British-accented voice: “You have no available minutes, please recharge and try again.” Everyday problems. …Kudos must go to the Masalacism label for making this available; they are changing Canada’s relationship with world music.

If you like this stuff. And I unabashedly do. I urge you to support all those involved by plucking down some digital dollars. This EP embodies a model of music industry that merits our investment: small-scale (but scalable), fair and collaborative, generous and open.

According to the guys at Masalacism, they’ve got a 50/50 deal with Ruff Riddims, after expenses (#realtalk). Guillaume elaborates,

Our expenses are quite limited but we’re doing a proper mastering in a pro studio (which as I understand isn’t that common for a net label) and some mailing expenses for Radio and Radio tracking, + some minimal marketing expenses in order to put the music in the store. The rest is pretty much DIY. Music is on sale on Itunes all over the world, Amazon and Emusic + on our own store: http://store.masalacism.com

The Masala guys also deserve credit for commissioning an amazing kuduro remix of “Airtime” from Portugal’s DJ Mpula, which cranks up the tempo a good 15bpm. And I guess somewhere in the calculus, according to David’s Q&A with Moemedi, I may myself merit some credit for serving as a crucial node in the network.

O brave new whirled,
that has such ethnomusicolobloggerDJs in’t! 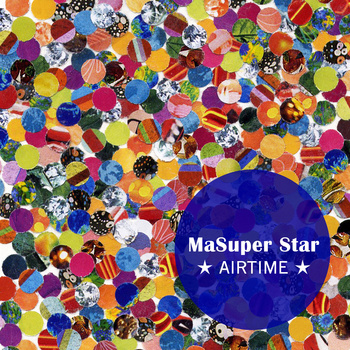 2 thoughts on “Airtime for Bots Brethren”