So, not only did Jamaica’s Usain Bolt (levitating below) set a world record in the men’s 100 meters, despite pulling up 20 meters early to celebrate and showboat… 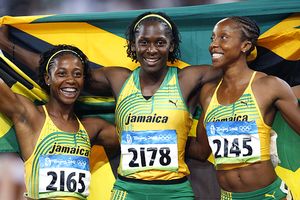 Lest we get too gassed about our favorite likkle-but-tallawa island’s dominance, however, the NYtimes puts things in humbling perspective. Maureen Dowd’s column this past Sunday, in case you missed it, bears the striking title, “Russia Is Not Jamaica.” Here’s the rubels quote —

As Michael Specter, the New Yorker writer who has written extensively about Russia, observed: “There was a brief five-year period when we could get away with treating Russia like Jamaica — that’s over. Now we have to deal with them like grown-ups who have more nuclear weapons than anybody except us.”

Ah, nothing like the infantilizing frankness of good ol’ imperial discourse. In other words, run all you want, likkle pickneys. Run and get me a rum & coke.