One of our guests tonight at Beat Research is Baltimore’s Sam Hopkins, aka Balagan, who promises to bring quite a (digital/digitized) crate with him. He might mix things up like — 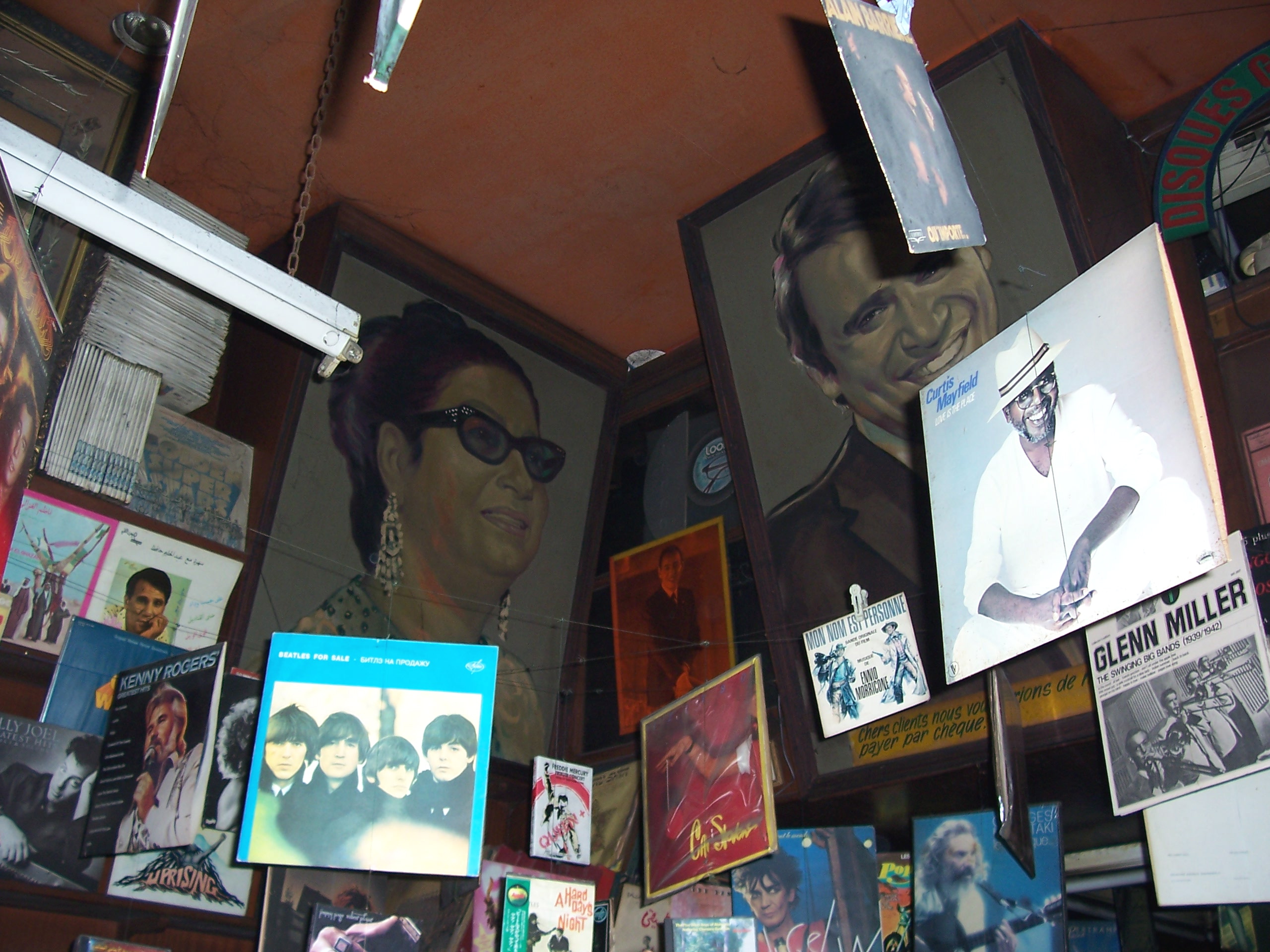 The great pic above comes from a piece Sam just published in Wax Poetics about searching for vinyl in Casablanca. Allow me to snip the lede:

The young Moroccan at the music stand didn’t get that I was looking for vinyl. I’ve searched for records all around the world, and been shot the same puzzled looks and second-guesses many times before. “CD?” he asked in accented English. “No, the old ones,” I countered, approximating twelve inches with my hands. “You know: big, black.”

He uttered a groan and tossed his head, returning his attention to a rack of small discs with photocopied covers that apparently deserved a careful rearranging.

“Everyone threw those away,” he said with his back to me. “Bullshit,” I thought.

Wherever I dig, I refuse to think that these stubborn digitalists don’t know at least one old neighborhood jazz cat or a parent or grandparent who held onto their clunky plastic music platters.

Sam’s own stubbornness eventually leads him to a trove of sorts c/o Gam Boujemaa, a longtime record collector & seller in Casablanca. A stockpile of vinyl, yes, but great stories too — telling tales about how vinyl from all over the world ended up in one little shop in western Morocco. For anyone who caught Boima’s provocative post last week about the neo-colonialism of digging for records in Africa, no doubt some sentiments in Sam’s piece will seem familiar, irksome even. (Check the rather interesting and contentious debate which has erupted in the comments! Fresh wounds all around.)

Given the trenchant questions Boima raises, I need to note how much I appreciate the nuance and ironies in Sam’s narrative. For all the notes of romance and curiosity that animate his search, he also shows the digger of today — i.e., guys like Sam — to be following, if in a sort of reverse, the steps of diggers before him — guys like Gam — with their own desires to transform themselves, by collecting just the right things, into something else, other, cosmopolitan, cool:

Gam Boujemaa sold newspapers on the street until he turned twenty. By that time, it was 1964, and he had heard enough jazz and seen enough Marlon Brando movies to know he wanted to own a leather jacket and sell the day’s best music to a cosmopolitan clientele.

The city was, and still is, a world away from Fez and Marrakech, the ancient trading hubs of the Moroccan interior where the smells of mint, olives, and live animals pervade all commerce. Casablanca had an Atlantic orientation that brought the Beatles and Otis Redding to Gam’s attention, and to his record store’s shelves years before his countrymen in the Atlas Mountains could know that rock and roll or R&B even existed. …

With between thirty and forty thousand records lining the shelves of his store on Boulevard de Paris, Gam isn’t the explorer he used to be. Some locals bring him their old collections, but his main business is selling to foreigners. French, British, Dutch, and Turkish collectors dominate his clientele nowadays, but the store recalls the time just after Moroccan independence from France when Gam’s excitement brought the newest sounds from overseas to his shop.

For example, between 1966 and 1970, Gam added thousands of Bollywood film 45s to his stock. Then, in 1970, he turned the store’s name into its own music label. He released records by popular singer Naima Samih, and drafted the folk-influenced troupe Jil Jilala to his imprint.

I like that Sam calls Gam an explorer. There’s a sense of commonality there, of certain shared notions and practices, despite their differences. And I like that the portrait Sam offers of Gam complicates too easy a reading of how either of their activities fit into an imperial/colonial order. But I’ll leave further analysis to the hive mind for now.

Instead, let’s let the music speak a little too, if thru Sam’s filter. Here’s the mix Sam made to accompany the Wax Poetics piece, featuring records he picked up in Casablanca and Fez, & liberated from its streaming-only status by yours truly and DownloadHelper:

Complicating things further, Sam offers up another “hand-dug” (his term) gem — this one “exclusive” to W&W — for our listening and debating pleasures. Perhaps unsurprisingly, it brings us into contact with another hot-spot for contemporary cool-vinyl hunters: Amazonian cumbia. Although he turned up the following track in Lima, it’s by Costa Rican soloist and bandleader Alfredo Barrantes, who found such success in Ecuador he became known as “EL PILOTO DE LOS EXITOS” (THE PILOT OF HITS). Note the telltale snaps’n’crackles at the outset:

Incidentally, if you dig sounds like these, we’ve got a real treat coming up in a couple of weeks: on Oct 4, alongside El G and the Frikstailers, representing the digital cumbia of the ZZK collective (!!!), we’ve also got Michael Pigott of Mass Tropicas, a label based in Western Massachusetts specializing in ethically-licensed high quality vinyl reissues of obscure Amazonian cumbia. I’ll be posting in greater detail about that in the coming weeks. But be sure to put Oct 4 on your calendars. It’s gonna be cumbiariffic!

Finally, if you’re looking for a sense of what he might sound like in the mix, here’s a relatively recent and wide-ranging set c/o Balagan:

I Can Triple Axel Too by Balagan