Jesse Kriss, whose History of Sampling visualization was long ago big upped here at w&w, has updated his Visual Scratch project (as formerly demo’d here) with the assistance of Boston’s DJ Axel Foley. 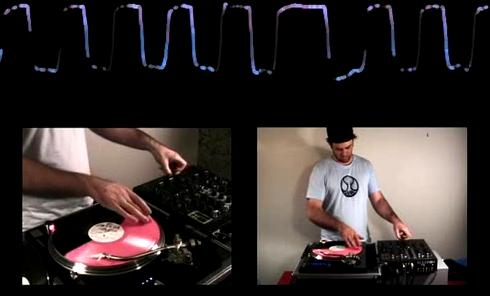 I take no small satisfaction in having connected these two technicians. When Jesse described to me his intention to represent a number of classic scratch techniques using the system he had set up, I knew Axel Foley — who had deftly demonstrated a history of scratch in my electronic music class, not to mention provided some searing cuts for Boston Jerk — was the man for the job.

For all its wizardry, I still think this demo is but, ahem, scratching the surface w/r/t what can be achieved in terms of illustration and analysis of technological musicking. If I were a more turntablist-inclined ethnomusicologist, I’d be working this into my work right away. (Miles White, where you at?)

Apparently the latest edition of Visual Scratch “will be on display at the InfoVis art exhibit in Baltimore, Oct 29-31, along with a series of six scratch visualization prints” — but I imagine it’ll be on the innertubes a lot longer than that. Check it out.

Cross posted to the Riddim Method.