The great irony of Postopolis!, as fellow blogger Nicola Twilley observes, is that the intense, consuming nature of the event itself tends to preclude much blogging about it. Add to the 60 or so presentations packed into 5 days the bewildering and inviting charms of Mexico City, and you’re lucky to make a virtual peep tweet at all. (To their credit, the Tomo folks made a valiant effort at live-blogging.)

But 140-char chunks hardly do justice to the immersive experience of Postopolis DF & el Districto Federal. So I’ll be taking a few posts to recap of some of the best things I heard, saw, and ate. And I heartily recommend checking out similar efforts via los blogs de mis colegas queridas: e.g., Regine, Daniel, Jace.

This antinomy, if I may, between realtime and online is somewhat appropriate given that Postopolis, despite its bloggy roots, seeks to recognize the importance of asynchronous internet discourse while creating a temporary space for material experience, immediacy, and the face-to-face sociality that the blogosphere generally lacks. This goal was achieved last week in DF, with bubbly success I think, and it was unlike any sort of event I’ve even been a part of. (“Conference” wouldn’t begin to describe it.) This is due in no small part to all the local partners of Storefront and Domus, namely Tomo, El Eco, and all the awesome architects, artists, students, y toda la gente who stopped by.

The other thing that Postopolis does well — again mirroring the blogosphere’s criss-crossing modes, media, and methods — is to offer, as former Storefront head and now Domus editor Joseph Grima put it on the first night in DF, “a transversal reading of a city.” Having held Postopoles in New York and Los Angeles, Mexico City seemed a fitting and exciting choice for such a project. It’s an immense city, a “megacity” as they say, and, without a doubt, an American capital with few peers (São Paolo and previous Postopolis sites, New York and Los Angeles, spring to mind). If one finds David Lida’s recent chronicles of Mexico City persuasive, one might go so far as to call it “the capital of the 21st century,” given that, as Lida argues —

Mexico City isn’t so much loaded with poor as it is brimming with people slowly struggling to scratch their way out of poverty. The improvised and informal nature of the community is emblematic of the way a megalopolis functions. Most people in Mexico City — indeed, most people in the world — live in a place much like it. (53)

Crucial to our grand endeavor of producing such a “reading,” of course, were the 60 or so invited local guests who offered up the grist for our bloggy mill. From architects and photographers to sewer divers and human rights activists to experts on the history of grain and water in Mexico (City), I think it’s safe to say that the bloggers curated up one hell of a transversal portrait of DF’s diverse dynamism, of el Monstruo‘s seemingly unending series of distinct but overlapping worlds — as well as its imbrication with other worlds across space and time.

Indeed, when my own guest, 2phase, a DF-based rapper and producer, invoked Tlaloc as the sky threatened to open up on us, it seemed a poignant gesture to the wider worlds we inhabit. Mexican rap? Sho nuff —

As I’ve explained previously, it was my aim, given the awesome power of invitation, to assemble a slate of guests who might help sketch out how hip-hop makes space for people working in its forms in the City, how it helps to constitute a scene or set of scenes, how it enters into commerce and local institutions of various sorts — basically, how it manifests and represents, to employ some apt rap parlance. Mi colega Regine Debatty, of We Make Money Not Art, is being generous when she asserts that I “drew a picture of Mexico’s hip hop and street art culture.” But I do feel that, together, mis invitados and I — with the constant & indispensable assistance of Camilo Smith — were actually able to scratch through some surfaces over the four sessions I presented. 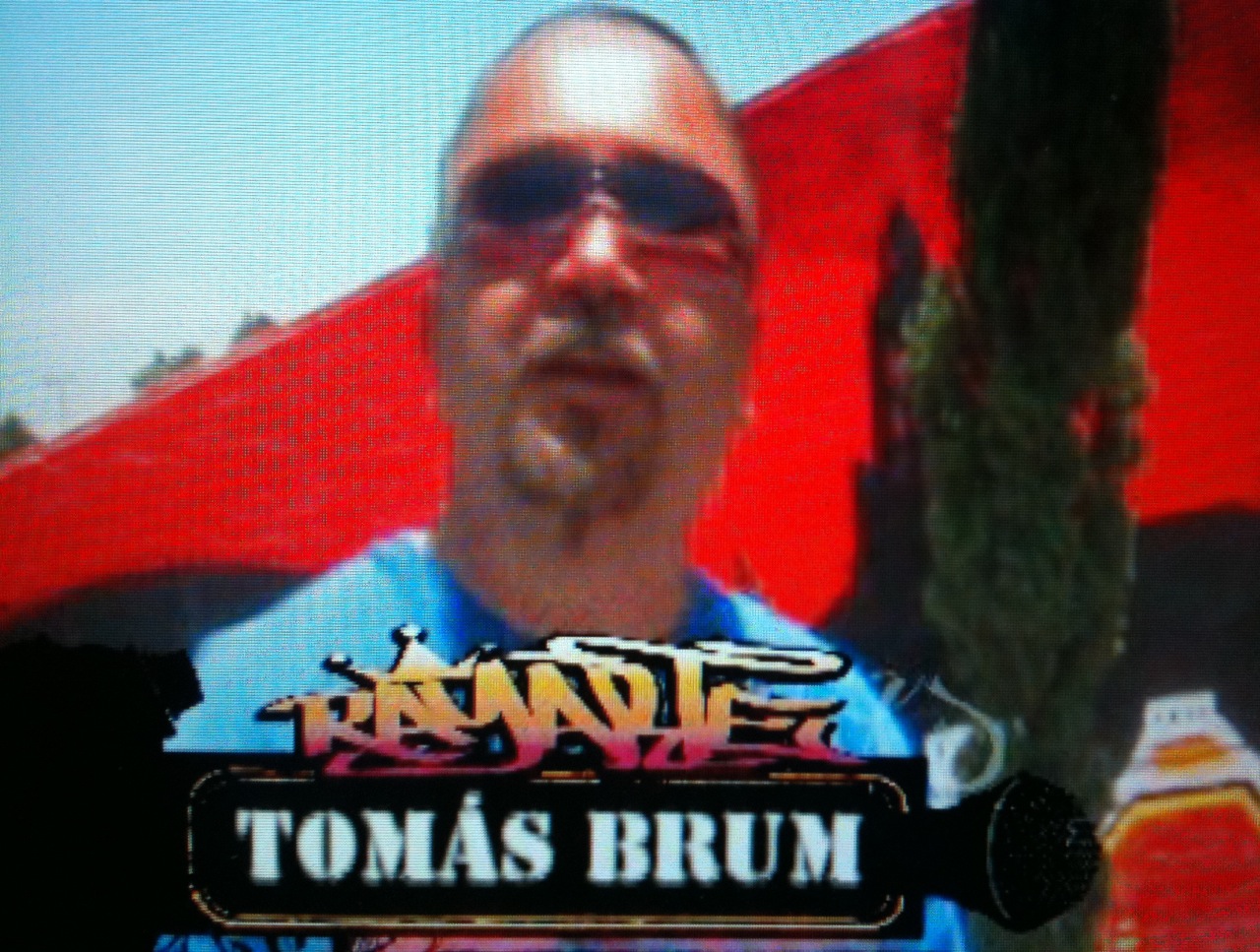 The first discussion I hosted was maybe the liveliest, thanks in particular to the entertaining riffs of Tomás Álvarez Brum, a local hip-hop impresario who publishes two graffiti magazines, Rayarte and BlackBook, and perhaps more importantly, runs TT Caps, a hip-hop shop in El Centro Histórico that sells pertinent books, magazines, spraypaint, t-shirts, CDs and DVDs — often on consignment for the artists producing them — and includes a tattoo parlor to boot. The store also hosts readings (incl for this, which I picked up) and live performances. Clearly, TT Caps — and Brum more broadly — is central to the scene in many ways.

Brum is a total character, and I’m sorry I don’t have the video to share (or review) at the moment; I’m hoping they’ll all be viewable soon thanks to Domus. I’m also sorry that so much of his talk went over my head, as he was speaking some rapidfire and at times rather chilango Spanish. Take this bit conveyed by Daniel Hernandez, for example, which, significantly, seemed to receive more laughs and RTs than anything else Brum said:

Discussing the hip-hop subcultures of Mexico City with Wayne Marshall, Tomás Brum Alvarez of Rayarte, a D.F. graffiti magazine, broke down the lack of public space and media outlets in the city for hip-hop nacional. While doing so, he made a pointed dig at the old guard at El Chopo, whom he argued are resistant to incorporating hip-hop into the scene there. He referred to himself jokingly as a "choposuario," and then said, no, he's an "artesángano."

Couldn't help laughing out loud. "Choposuario" is a compound slangism that describes the graying old rockers who still guard El Chopo like it's some kind of countercultural holy grail (which it is), but also connotes a kind of nostalgic delusion for the old days of the tianguis — which is now almost 30 years old. But artesángano was totally new to me. Sángano is another slangism that describes a lazy figure who leeches, or hooks others into doing his will. So what's an artesángano? An artesano, artisan seller, who hustles without shame? Whatever its intended meaning, I'll definitely be using it when inspiration strikes.

Brum was joined on stage by DJ Ali of Masare Records, who I wanted to bring into the conversation as someone using hip-hop to tap into other sorts of commercial channels — among others, sponsorships by the likes of Rane and Serato, not to mention local brands and institutions, and residencies en las zonas “super nice” como El Polanco o La Condesa. Importantly, while Ali may in some ways leverage hip-hop to support his commercial efforts, he also quite clearly leverages these efforts for the sake of local hip-hop. I was told by several locals that Ali is a stalwart booster of the scene, constantly shining light on local MCs and creating opportunities for them to perform. 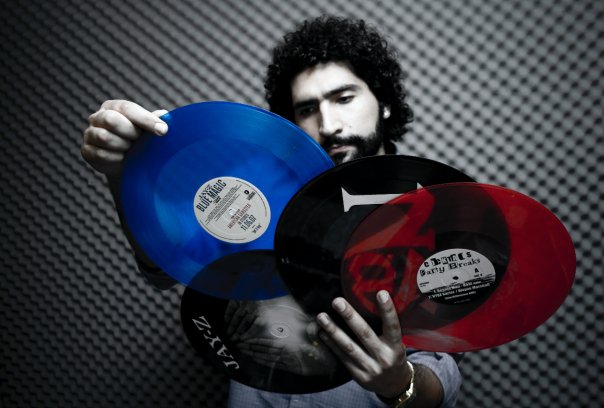 As an interesting contrast/complement to Brum’s daily grind, Ali promotes hip-hop in DF by staging grand events such as the I <3 Hip Hop concert he put on last November, for which he brought Jazzy J all the way down from Brooklyn. The event, as noted in my walks around La Roma, continues to enjoy some “street team” style promotion —

Since Brum and Ali were able to speak to a certain level of institutional scaffolding for hip-hop in Mexico City, I was hoping that a second session on hip-hop, involving practitioners at the level of performer/producer, would help to flesh things out further. And I think that 2phase and his Poblano labelmate Lil T’ko — in conversation with Camilo — did so with panache and detail.

Because he grew up in Chicago, I was able to follow 2phase a lot better than Brum or Ali. Several years ago 2phase relocated to Mexico City (if I recall correctly, he was born there), to attend audio-engineering school, picking up some skills that have been instrumental in his success as a producer and as someone now running a studio that aims to serve a clientele beyond the local hip-hop community. His own transnational experience is typical of the “cholo rap” scene in which he participates, connecting Mexico proper to trans-border Mexican sites such as Chicago, California, and Texas.

2phase and Lil T’ko, before closing with a rousing rap that may have been an energetic high for the Postopolis! stage, discussed the ins-and-outs of running modest record labels, putting on shows, and sustaining their careers as artists and producers. Camilo did a fine job of interviewing, asking 2phase to elaborate, at one point, on what he meant by “mainstream” in Mexico/City. (He meant: on radio or TV.) Among other things, I was thrilled to hear 2phase talk — without any prompting — about DLing music production software and watching how-to’s on YouTube, especially since these very activities keep cropping up in my present project on music industry in the age of internet. Although they spent more time discussing local, material efforts than those in the virtual realm, they’ve clearly got their MySpace game on full-blast (note that 2phase’s page lists DJ Ali and TT Caps as friends). To wit: even the mixtape they handed out at the end of their presentation has its own page.

One interesting question from the Postopolis audience was concerned with how some of 2phase’s peers from the same audio engineering school he attended can’t seem to get jobs doing punk or rock work, and yet, 2phase has managed to sustain a career and build a burgeoning label, studio, and production company around hip-hop, which is by all accounts a smaller and far more marginal scene than rock or punk (indeed, the words underground or subteráneo got thrown around plenty in our discussions). Interestingly, this suggested to Camilo that marginality may have its upsides. As he wrote to me via email, “hip-hop is marginal in the D.F. music scene, but at least these guy can carve their niche, thanks to that.”

Margins are spaces of their own — & it can be easy to lose sight of that.

But if hip-hop still remains in some ways marginal or underground or subteráneo in Mexico City, graffiti is quite the opposite. Graffiti is everywhere. It transcends hip-hop, tattooing toda la Ciudad —

My next recap will build on this post to discuss how graffiti relates to and departs from the local institutions of hip-hop in DF. Hasta entonces —