Tomorrow I’m participating in a symposium convened by the Center for Africana Studies at the University of Pennsylvania. I’m humbled and excited to be a part of the conversation. Check the lineup —

Free and open to the public

Not only is it an honor and a thrill to be a part of such a panel, it’s a wonderfully sanctioned opportunity to do something I rarely feel comfortable doing in an academic setting: explore the seamier side of the Jamaican YouTubosphere and the wider world of sex/slackness/smut(?) inna JA and the diaspora.

If I can pull it together, I plan to touch on the structural slackness that enables someone like Mavado to claim, casually, as part of his gangsta bonafides that “gal yuh pussy tight” —

— but more to the point, I’d like to examine the recent appearance of the “titty wine.” Far duttier than the “dutty wine,” the dance calls for the gyal dem to rub their breasts dem in an alluring manner, which many, many women seem more than happy to do (and to broadcast to the world!). Apparently concocted in Jamaican Brooklyn, the “titty wine” is promoted as a dance that “gone global” and indeed it seems to be catching on across the dancehall diaspora (e.g., Trini represent). Adding a layer of curiosity, the movement seems to be spearheaded by a JA-BK mastermind (check the intro) and two aspiring dancehall queens from farin, a Canadian and an Estonian to be precise (!).

Despite that I find the term “smut” somewhat confusing/foreign/etic as applied to a Jamaican context, some of these clips definitely walk the line of u-know-it-when-u-see-it. Indeed, several clips could strongly benefit from the simple but powerful bootyclipse critique (especially the one weh take place inna the kitchen). E.g.,

It is encouraging, however, to see that the “titty wine” seems to have spurred some interesting and even civil debate around the question of respect/rawness in dancehall. Who knew that a YouTube comment thread could be so reasonable? Check this exchange — 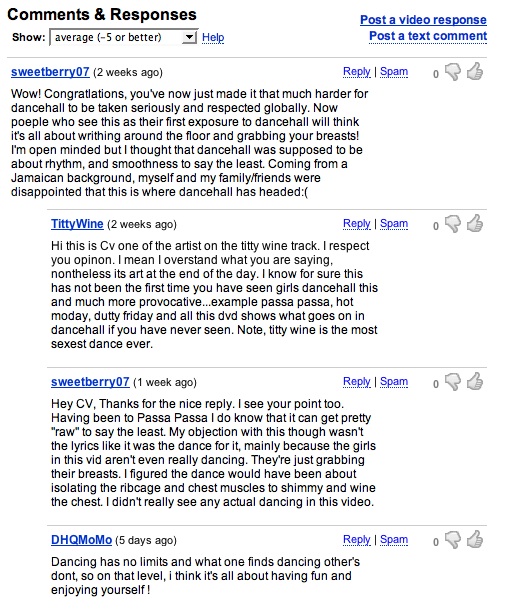 At any rate, I’ve still got to shape up my remarks for tomorrow, but I’m looking forward to the ensuing discussion. I’ll let you know how it goes. For now, allow me to close with an apropos pic I snapped when in Kingston last summer —

NO WEAPON
NO DRUGS
NO MERINO