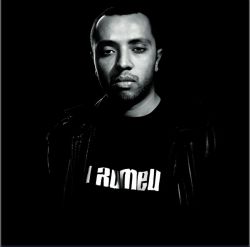 This Monday, the French section of Foreign Languages & Literatures (my home at MIT) is presenting Hamé, a rapper and filmmaker from France. Some of you might know him from his work with La Rumeur. Here’s what is in store for Monday evening —

In addition to a sample performance of his rap artistry and a short talk on “Youth in France’s Outer Cities” (les banlieues), Hamé will screen ten short films that are part of his collaborative compilation work on police brutality, Outrage and Rebellion, including shorts by directors Chaab Mahmoud, Peter Whitehead, Marylene Negro, and Jean-Marie Straub.

I’m also happy to report that I got in touch with Hamé and asked him whether we could get him over to Beat Research after his presentation at MIT. As it happens, we also have two guests from France that night — PARAL-LEL and Nth Synthesis — so it should be a rather Francophone evening. I most appreciate Hamé’s response:

Sounds good to me, I’d be glad to go with you at the club and kick some of my frenchie rhymes.

Sounds good to me too — and maybe you? Jusque-là!