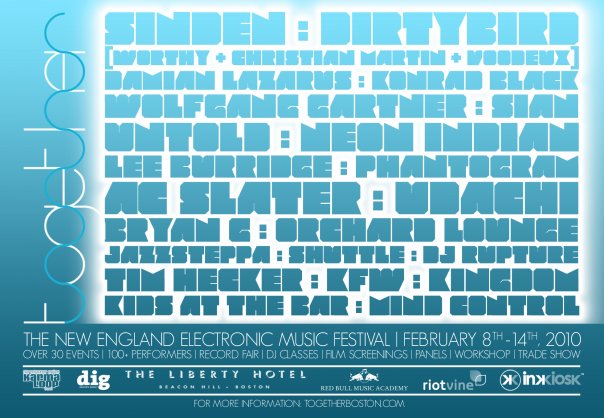 As I suspect many readers are aware, next week here in Boston is the first annual Together Festival, this city’s own attempt at an electronic dance music gathering that seeks to highlight local talent as well as bring in some heavy hitters from beyond New England. The schedule and lineup are pretty damn impressive, I gotta say, with a glut of great acts every night of the week. 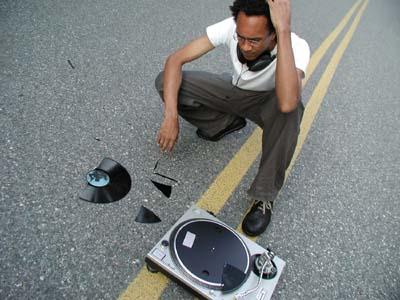 Since he’s not exactly a stranger to Boston or to Beat Research, /Rupture has promised to deliver a “special set” for the TGTHR massive. What’s that gonna sound like? Your guess is as good as mine. Rest assured it’ll be special; perhaps unlike anything you’ve heard from /Rupture before. Chatting about the set, he made reference to “sandpaper slipmats,” a suggestive metaphor to be sure, and told me he’s aiming at the more experimental side of the “experimental party music” we promote. /Rupture will be working with his classic 3 turntable setup, so that guarantees quite a bit of mixing and mashing. Speaking for myself, I can’t wait to hear what Jace has in store for us, especially given his recent thoughts on noise and negrophonicity. I expect it to be an enchanting kickoff to an exciting week.

[Oh yeah, need I mention — as is always the case with our modest Mondays — that this is FREE?!]

But I also expect, or hope anyway, to make it out of the house on nights other than Monday — an increasing rarity for this father of two young kids. A few of the other gigs I’m hoping to hit include some of my favorite performers/DJs in the whole wide whirled: there’s Kingdom on Tuesday (w/ DJ Rizzla et al.), Dutty Artz bredrin Taliesin on Wed (c/o Kat Fyte, who put tgthr a transnat’l-bass roundup for the week) — and countless others, from Das Racist to Untold, Tim Hecker to DJ Funk to Nicolas Jaar — and that’s just cherry-picking from my own skewed perspective. Gonna be a wicked pissah week, regahdless.

Also, there are a bunch of panels by day, including a workshop from DJ Flack offering “a condensed version of his legendary Beat Research curriculum” as well as a session about genre distinctions (Thursday at noon), moderated by yours truly and featuring Jazzsteppa | Mikey Lee (Coralcola) | Geoff White (Soul Champion) | Ezra Rubin (Kingdom) | James Therrien (Boston8Bit / Castor Pollux) | Sian (Octopus Records) | and George Gayl (Silent Disco). Should be innaresting!

If you’re as tantalized by all the events as I am, you might want to look into getting yourself a rather reasonably priced weeklong pass.

All in TGTHR now!

5 thoughts on “Make Some Noise Tgthr”