[Here’s another repost for the archives. These are by no means my most accomplished etudes in this vein, but I think they suggest some fun and useful possibilities, especially for pedagogy. As usual, I’ve updated some links below. This was originally published way back on 17 February 2006.]

in my class on electronic music, i generally use ableton live to play through – and more importantly, to play with or manipulate – the various musical examples for each week. sometimes i simply like the way live allows me to zoom in and out of a musical example with ease, focusing in on particular moments or sections. sometimes i use live to loop a particular section in order to examine it more closely. and sometimes i use live to tweak the selections in some way or another, which can range from simple to more radical transformations.

often, as with my mashes of cover songs, i juxtapose two (or more) tracks with each other in order to draw out relationships and highlight connections as well as divergences.

one such mix that i created for a recent class was a version of bob marley’s “concrete jungle” that segued back and forth between the “released” and “unreleased” versions (as collected on the catch a fire reissue “deluxe edition”). 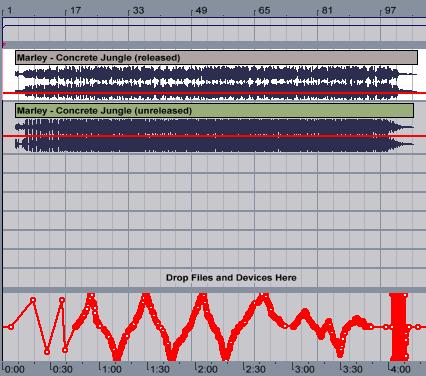 as you can see from squiggly red line in the picture above, i generally go slowly back and forth between the two versions (every couple of bars or so, at least until the end), in order to draw out the comparison. it really is remarkable how different the two versions sound, especially right next to each other. in contrast to the kingston version’s acoustic guitar and heavy low-end (on bob’s voice and the rest), the london version adds some flashy rock instrumentation and filters bob’s voice to leave only the high-mid range. the filtering of the voice seems to odd to me, since the original has such presence, but i suppose the decision was made to keep the song’s frequencies relatively unmuddled and to create a greater degree of instrument/voice separation. not sure it’s a money move, though. (ok, actually it was a money move, so what do i know.)

perhaps even more telling is that bob’s third verse – which, in classic reggae style repeats the first – was excised for wayne perkins‘s clapton-esque guitar solo wankery. sure, it’s a wicked solo by pop-rock standards, dripping with the southern style perkins was known for, but i prefer to hear it mixed under bob’s voice. at any rate, i play with the panning/crossfader a lot here, and the ultimate goal is not so much about creating something aesthetically more pleasing but simply to draw our attention to the songs’ differences. (btw, i think this also reveals that, despite the lore around blackwell’s remixes, the “officially released” version includes a different vocal take than the original – though, yes, it’s still highly filtered/EQ’d.)

another example of this sort of approach can be heard in my attempts to draw out the ska-like rhythms that emerge at various points in steve reich’s “it’s gonna rain” – a classic tape-piece and one of the first shots in the phase-process approach of the minimalist movement. one of the great things about the piece is how it subtly shifts accents, creating various “aural illusions” (as ethnomusicologists often call them, especially with reference to such traditions as shona mbira music or ewe agbekor), as we tend to hear different collections of strong and weak beats and thus impose various patterns on the sounds. this can be a difficult thing to demonstrate to a class as it largely involves one’s own perception and imagination rather than something objectively observable in the music itself.

i wanted to provide a bit of a suggestive hearing of the reich piece by showing how at certain times one could hear ska-like patterns of alternating downbeats/upbeats in the phased-out vocalizing of reich’s preacherman. in order to do so, i looped a couple of these moments and then mixed them with a segment from prince busta’s ska classic, “al capone.”

funny sounding? yes. and, i’d say, definitely no improvement on either of the originals. but that’s not the point here. again, i’m simply seeking to demonstrate some musical relationships through the wonderful possibilities of mixing and mashing and tweaking and looping.

finally, i present you with a “standalone” version of my mix’n’mash of jazz pianist jason moran’s “planet rock” with the original as performed by afrika bambaataa and the soul sonic force (w/ the assistance of production/keyboard wizard arthur baker). after i saw that rio rocket posted a follow up on moran/bam, i decided it would be worthwhile to show how much the two versions actually correspond/diverge outside the context of a mix.

originally, i thought that i might perform a few additional edits on the piece to better “line them up” and show how amazingly accurate moran’s interpretation is. but then i noticed that not only are the two tracks almost exactly the same length (bearing in mind that this is a shortened version of the original) but by juxtaposing them largely unchanged it really serves to highlight moran’s distinctive touches. rather than having the two play in unison on later verses/sections, i prefer the way they seem to anticipate and echo each other. and once moran begins soloing on the materials, i like how the combination brings out the out-ness of moran’s homage.