That review of the new Tego album in the Phoenix that I’ve been telling y’all about has finally seen the light of day. You can find it in the digital fishwrap here, but I’m going to go with my standard practice of reprinting the original on this humble blog since inevitably a word or two (or three) has been changed or excised and it doesn’t always sound like my voice anymore (for better or worse, I suppose, depending on your aesthetics).

For all the Idolators out there who have strong opinions about who’s hipper than you journalistic integrity, allow me to provide full disclosure: everything you are about to read is a fabrication, an invention of my active imagination — shit, some of it’s a translation. How that affects how you hear Tego, well, you’ll have to let me know. 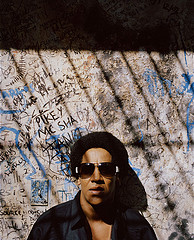 Tego Calderon’s debut album, El Abayarde (White Lion / BMG 2003) caught the ears of both the reggaeton street and the critical elite. Its diverse stylistic palette, politically-charged rhymes, and easy swagger presented a striking alternative to the assembly-line, in-your-face reggaeton flooding the market. It also set a high bar for future efforts. On Tego’s new disc, The Underdog / El Subestimado (Jiggiri / Atlantic 2006) the Afro-sporting, gap-toothed grinning rapero returns with another genre-busting effort, and this time he’s got Atlantic records, the label that gave Sean Paul just the right push, to help him project his distinctive, deserving voice.

Those who find reggaeton monotonous would have a hard time lodging the complaint at Tego. Despite the dembows (and plenty of those), Tego’s music brings together a greater variety of styles than most of his contemporarie — and not just his fellow reggaetoneros. Although it has become commonplace to describe reggaeton as a mix of hip-hop, reggae, salsa, and even such traditional Afro-Puerto Rican genres as bomba and plena, few reggaeton productions live up to this motley model. Tego proves the exception, however, and The Underdog revisits all these influences while breaking new ground.

Warning Tego’s challengers that he will return to “kill” them again and again, the lead single, “Los Maté,” gestures both to contemporary hip-hop and further across the Latin musical spectrum by giving a classic Mexican ballad, “El Preso Numero 9,” the chipmunk soul treatment. The track resolves its far-flung connotations with a solid reggaeton groove, layering chopped and filtered loops from such well-worn dancehall sources as the Dem Bow and Bam Bam riddims and adding some subtle synths to fill out the texture. A fitting first shot, “Los Maté” puts Tego right back at the vanguard of the genre, nodding to hip-hop and reggae routes, an expansive, diasporic vision, and a musical talent unconstrained by genre.

In contrast to his peers, many of them participants in the dancehall-heavy pre-reggaeton “underground” or “dembow” scene during the 1990s, Tego cut his teeth on hip-hop, in part while living in Miami as a teenager, and his flows and beats bear witness to an aesthetic steeped in that ol’ boom-bap. While Daddy Yankee and similar vocalists spit double-time rhymes and strain their voices (purposely, mind you) to propel high-pitched melodies cribbed from dancehall reggae, Tego keeps it nonchalant in his smoky baritone, more indebted to Tupac Shakur than Shabba Ranks. He’s more likely to cite Bob Marley as an influence than any dancehall DJs, and he’s quick to add the names of such seminal MCs as Rakim and such skillful soneros as Ismael “Maelo” Rivera, who gets a number of shout-outs on The Underdog. The album employs hip-hop beats alongside reggaeton pistas and reggae riddims (of both dancehall and roots varieties), often infusing them with additional polyrhythmic percussion, evoking the traditional Afro-Puerto Rican and Afro-Caribbean styles Tego has been known to embrace and bringing hip-hop’s Afro-Latin roots back into the foreground by recalling the Latin-tinged funk breaks which provided a rhythmic foundation for the genre. Two acoustic interludes, “Son Dos Alas” and “Por Que,” make audible connections between traditional Afro-Puerto Rican styles and the island’s most contemporary expressions.

Tego has long distinguished himself through his poetic politics, and to his credit he balances such sentiments with cutting humor, a strong sense of fun, and a wide range of topics and concerns, presenting himself as fully human, if that means he must show his seams. The Underdog offers, among other portraits, a poignant plea about a father estranged from his child and restrained by a biased legal system (“Oh Dios”) as well as a genuinely touching tribute to Tego’s late father (“A Mi Papá”), supported by a sweet, nostalgic beat provided by Miami-based producers Major League. The necksnappin’ “Payaso,” produced by Salaam Remi and featuring Puerto Rican hip-hop veteran Eddie Dee and Tego’s up-and-coming labelmate Voltio, effectively reanimates a well-worn Herbie Hancock sample (from Headhunters‘ “Watermelon Man”) in order to assail wannabe gangster reggaetoneros as “clowns,” calling for fewer street stereotypes and more range and substance. Non-Spanish speakers shouldn’t worry too much about missing every detail, for even native Puerto Ricans have trouble keeping up with Tego’s wide-ranging slang, which includes obscure regional references and terms from his grandparents’ generation. As he says in a rare English phrase on the album, “You might not understand, but it’s hot.”

And Tego’s just as happy to balance his more thoughtful turns with tracks telling the girls to “move it.” So listeners looking for some plucky, in-the-genre bangers will not be disappointed by the boom-ch-boom-chick of “Pon La Cara,” “Comprenderas,” or the sole Luny Tunes production on the album, “Cuando Baila Reggaeton” (featuring Yandel). Even Tego’s synth romps tend to stand up to, if not trounce, the competition, while the album’s regular stylistic shifts prevent the dembow fatigue that the genre’s other offerings can produce.

This is not to say that there aren’t missteps on The Underdog, but that’s the price of experimentation. “Mardi Gras,” a bluesy reggaeton grind, is too full of aimless guitar noodling to redeem its bold attempt at another fusion (though Tego’s cartoonish, gravelly chorus almost redeems the track’s southern kitsch). “Badman,” a dancehall tune featuring Buju Banton feels uninspired and gratuitous in its tough guy posturing and “gun lyrics” by-the-numbers. The quasi-live funk of “Bureo Bureo” probably should have been saved for a misguided unplugged album, and though “Chillin'” (with Don Omar) features strong vocals, the producers’ chock-a-block attempt at roots reggae is a little too square. Tego turns in solid performances throughout, but he seems to shine most on The Underdog when he goes out on a limb.

On the tracks where he decides to indulge his love for salsa and to emulate Maelo, “El Negro Calde” takes a strong step forward for reggaeton and salsa alike. DJ Nelson offers up some salsaton accompaniment for Tego and venerable Venezuelan singer Oscar DéLeon. But it is on “Chango Blanco,” an avian allegory about black pride, where Tego shows himself to be a budding sonero in his own right. Supported by a full salsa band, Tego sings with brio the story of a black bird painted white who learns, thanks to some rain, to love his true color: “I want to stay / I want to stay black,” Tego intones, “I was born with this color / And it looks good on me, good.” Improvising his way skillfully through a call/response montuno, Tego occasionally dips into some rap-style vocals for contrast.

At the end of the song, he pronounces “weak salsa” to be done — something to provoke the anti-reggaeton old folk, no doubt, but not necessarily off the mark given how much salsa, especially in its romantica guise, has become cheesy and decidedly apolitical. Tego’s turn here hints at the reinvigoration both genres might receive through such an exchange. He may not yet be the “sonero mayor,” or premiere improviser, that Maelo was, but he’s well on his way.