Yesterday Becca and Charlie hosted Tricky Nick Sylvester in their CyberOne class in order to discuss “Active Participation in the Media.”

It’s an interesting conversation, raising a number of points every good reader should consider (and that means YOU). Nick speaks well, students don’t let him off easy, and Becca keeps our eyes on the prize.

You can gawk watch the (Quicktime) video of the class in two parts: first | second

I recommend it. If nothing else, one gets a stronger sense of Nick’s voice.

All the better to appreciate the next turn he takes. 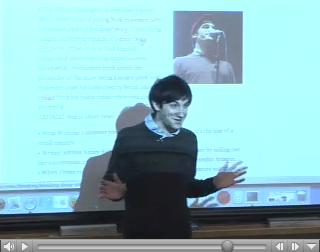