Latin Music USA is a story about American music. Fusions of Latin sounds with jazz, rock, country, rhythm and blues – music with deeper roots and broader reach than most people realize. It’s a fresh take on our musical history, reaching across time and across musical genres to embrace the exciting hybrid sounds created by Latinos; musical fusions that have deeply enriched popular music in the US for over more than five decades.

The multi-media project is anchored by a four-hour documentary series that will premiere in October 2009, during Hispanic Heritage Month, on PBS stations nationwide. Produced by a world-class production team at WGBH and the BBC, Latin Music USA invites the audience into the vibrant musical conversation between Latinos and non-Latinos that has helped shape the history of popular music in the United States. Hispanic Heritage Month (Sept. 15th-Oct. 15th), a time to recognize the contributions of Hispanic Americans to the United States and to celebrate Hispanic heritage and culture, offers the series a perfect opportunity to further honor these influences. (via)

As if the series’ ambition and tribute to the USA’s Latin roots/routes wasn’t enough to be excited about, they’ve given me (and maybe you, dear reader) an additional reason to be enthused: Episode 4, touching on reggaeton and Latin hip-hop, features my first appearance as a TV talking head! That I get to offer some commentary alongside big dogs like Daddy Yankee and Tego Calderon, never mind the vast slate of distinguished musicians, producers, journalists, and scholars also featured in the series, is a humbling and awesome thing to report. 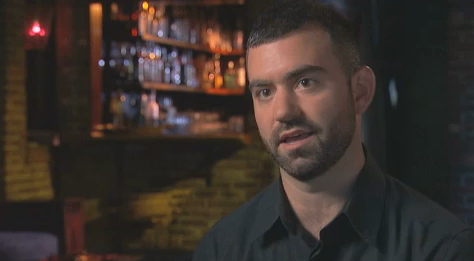 thx to the enormous room for the classy backdrop!

You can get a taste via a couple clips on their website, wherein I think I acquit myself ok:

I highly recommend poking around on the website. It’s quite flashy and interactive — you can browse texts, audio, and video by navigating swirling networks of places, genres, instruments, rhythms, and more. Check out, for example, the “universe” of Latin Jazz.

This series is a big experiment for PBS, a deviation from the standard programming targeting the PBS core audience (i.e., Masterpiece Theater, Antiques Roadshow). According to one of my contacts at PBS, they’re aware that the primary audience for this series (Latinos) does not typically watch PBS, and they’re hoping it will attract viewers from all over the spectrum. So, tusabes, plz help em out on their socialmedia campaign by friending, fanning, RTing, etcccc —

Special thanks to Juan Camilo Agudelo & Adriana Bosch for involving me in the project — congratulations on its completion, y’all, and all the best with reaching the vast viewership it deserves!